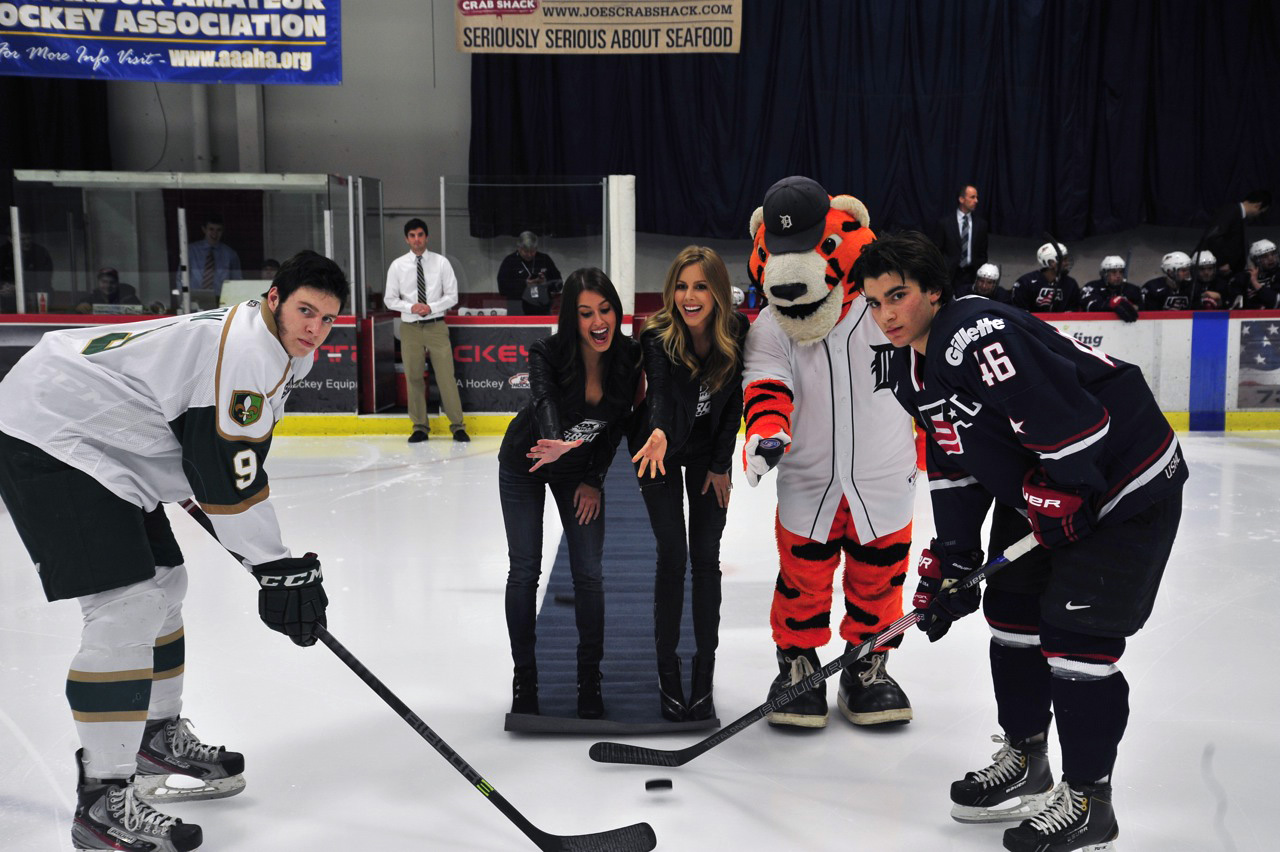 ANN ARBOR, Mich. - Luke Kirwan (DeWitt, N.Y.) scored two goals and 12 other players registered at least one point, as the U.S. National Under-17 Team outdueled the Sioux City Musketeers, 9-6, here tonight at the Ann Arbor Ice Cube. The team welcomed the Detroit Tigers official mascot, “Paws”, and the Fox Sports Detroit girls as a part of Baseball Night at the Cube.

After killing a 5-on-3 power play against them, Team USA opened the scoring at the 11:12 mark of the first period. Jack Roslovic (Columbus, Ohio) fired the puck from the bottom of the left circle and Jordan Greenway (Potsdam, N.Y.) picked up the rebound, burying it past goaltender Kyle Hayton. Christian Evers (Waukee, Iowa) recorded the secondary assist on the play. Colin White (Hanover, Mass.) extended the lead, 2-0, for Team USA just 28 seconds later. Jeremy Bracco (Freeport, N.Y.) skated into the attacking zone and rifled a shot off of Hayton. The puck found the stick of White, who pushed it into the back of the net for the score. Matthew Tkachuk (St. Louis, Mo.) added to the U.S. lead at 19:40 with assists from Luke Kunin (Chesterfield, Mo.) and Evers.

Christian Fischer (Wayne, Ill.) gave the U17s a commanding 4-0 lead at 3:47 in the second stanza on a delayed penalty call. From the left side, Greenway crossed the puck through traffic, where Fischer chipped it into the cage. Brendan Warren (Carleton, Mich.) registered the second helper. The Musketeers rattled off three consecutive goals under three minutes apart to close the gap, 4-3. Ryan Wagner (Park Ridge, Ill.) responded 22 seconds later for Team USA. Roslovic fed Wagner from behind the net and fired it past Hayton.

Sioux City potted a quick goal at 1:07 in the third period to climb back within one. The Under-17 Team answered at the 5:30 mark for a 6-4 lead. Bracco threw the pass into the slot from behind the net to Kirwan who rattled it into the net. The Musketeers knotted the game at six apiece after scoring back-to-back goals at 10:22 and 11:15. Charles McAvoy (Long Beach, N.Y.) reclaimed Team USA’s lead at 13:25. Warren fired the puck from the left side across to McAvoy for the eventual game-winner. Kirwan and Warren added two tallies at 16:55 and 18:48 to secure the 9-6 win for the U17s. Warren's tally came with an empty net.

Blake Weyrick (Ojai, Calif.) turned away 31 shots in the win for Team USA, while Hayton made 29 saves in the loss for Sioux City.

The U.S. National Under-17 Team wraps up the 2013-14 regular season tomorrow night when it hosts the Dubuque Fighting Saints at the Ann Arbor Ice Cube during Fan Appreciation Night. Puck drop is scheduled for 7 p.m. EDT.

Team USA outshot Sioux City, 38-37 ... Luke Kirwan is on a three-game point streak, scoring three goals and assisting on two others during that span. His multi-point effort was his fifth in the USHL this season ... Jeremy Bracco recorded his 10th multi-point game this season in the USHL, while Jordan Greenway notched his seventh and Brendan Warren registered his fourth ... Follow the NTDP on Twitter and Instagram and like us on Facebook ... Download the Sport Ngin Mobile App for Apple iOS and Android devices and follow the U.S. National Under-17 and Under-18 Teams. Fans, parents, athletes, and coaches now have unprecedented access to scores, stats, schedules, photos, and more. The app is free and allows users to track scores and news updates from one team. Those wishing to follow more than one team can make a simple in-app purchase of $1.99. Click here to download the app.