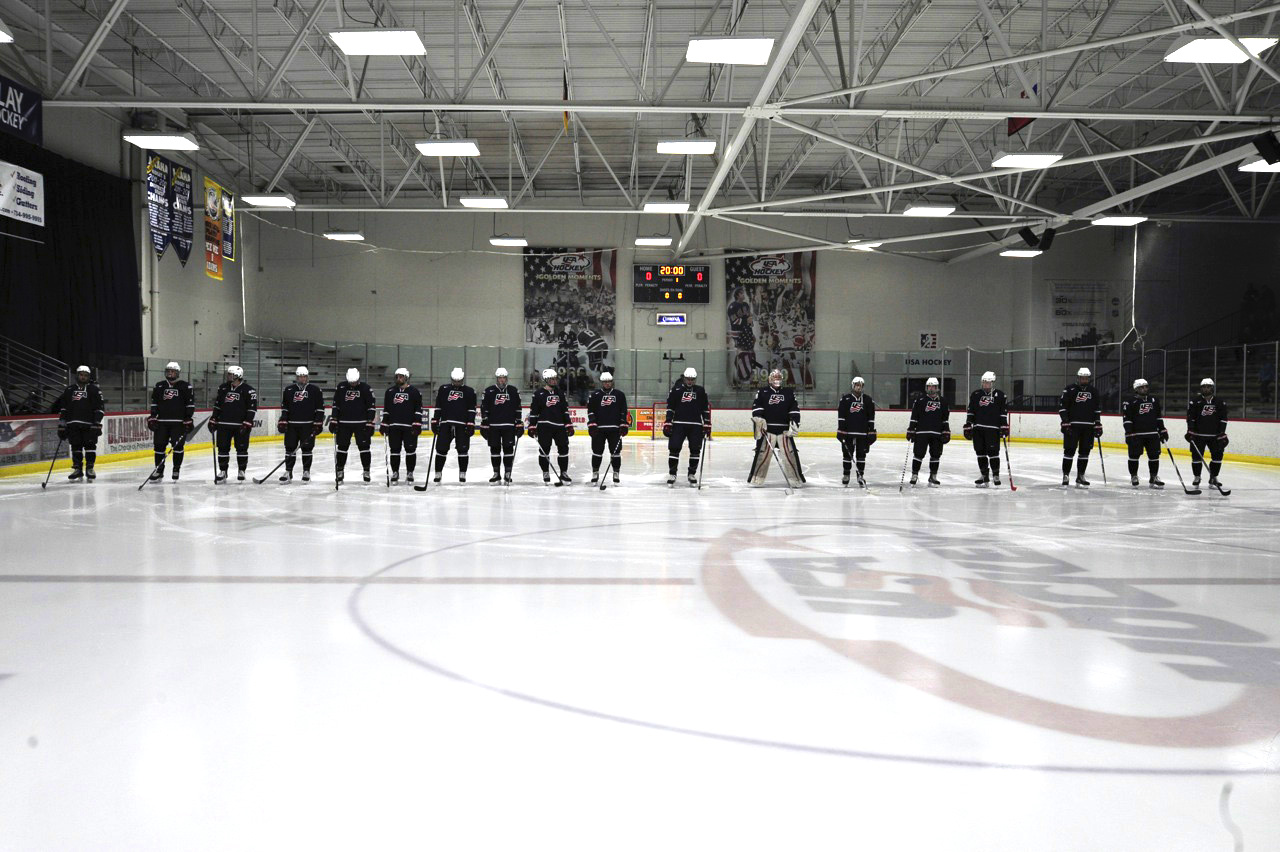 Team USA struck first at the 14:48 mark in the opening period. Milano skated into the attacking zone and dropped the puck for Louie Belpedio (Skokie, Ill.) at the point. Belpedio fired a snapshot into the back of the net from atop the faceoff circles. Alex Tuch (Baldwinsville, N.Y.) added a secondary assist on the play.

Muskegon pulled even, 1-1, with a power-play goal 6:37 into the second stanza. Milano reclaimed the lead for the U18s on the man-advantage at the 13:32 mark. From the right corner, Jack Eichel (North Chelmsford, Mass.) fed Tuch for a quick shot in the slot. Tuch's shot led to a scramble in front of the net before Milano rifled a shot off of netminder Jordan Uhelski and picked up his own rebound for the tally. The Lumberjacks knotted the game at two apiece at 18:42 entering the second intermission.

Team USA took the lead once again, 3-2, with a short-handed goal by Milano at 7:11 of the final frame. Eichel forced a Muskegon turnover at the defending blueline and fed Milano for a breakaway. Milano faked left before sending a backhander high past Uhelski. The Lumberjacks forced overtime with 13 seconds remaining in regulation after pulling Uhelski in favor of an extra attacker.

Neither team could convert in overtime, and for the second time in as many days, the U.S. entered a decisive shootout. Muskegon scored once on three attempts, while Team USA converted successfully on its first two tries with Hitchcock clinching the victory on a low wrist shot through Uhelski's five-hole.

Edwin Minney (Wind Gap, Pa.) made 29 saves in the win for Team USA, while Uhelski turned away 37 shots in the loss for the Lumberjacks.

The U.S. National Under-18 Team will turn its focus to the 2014 IIHF Men's Under-18 World Championship, kicking off April 17-27 in Lappeenranta, Finland. Team USA is coming off its 10th straight medal appearance, earning silver in Sochi, Russia last year.

Team USA outshot Muskegon, 40-32 ... The U18s finished with a 21-5-2 (W-L-OTL) record versus USHL squads this season ... Edwin Minney appeared in his 71st career game with USA Hockey's National Team Development Team. That number puts the netminder eighth all-time, moving past Jack Campbell (Port Huron, Mich./2008-10). Minney's final USHL stat line would put him 10th in goals-against average (2.63) and 16th in save percentage (.905) ... With two assists today, Jack Eichel registered his fourth straight multi-point game. The forward has one goal and seven assists in those four games ... Alex Tuch extended his point streak to four games. He has six helpers in those contests dating back to March 22 ... Louie Belpedio finished the USHL regular season with goals in three of games. The blueliner also added an assist for a two-point effort on March 15 ... Sonny Milano had five points (3-2) in his final two USHL bouts ... Follow the NTDP on Twitter and Instagram and like us on Facebook ... Download the Sport Ngin Mobile App for Apple iOS and Android devices and follow the U.S. National Under-17 and Under-18 Teams. Fans, parents, athletes, and coaches now have unprecedented access to scores, stats, schedules, photos, and more. The app is free and allows users to track scores and news updates from one team. Those wishing to follow more than one team can make a simple in-app purchase of $1.99. Click here to download the app.