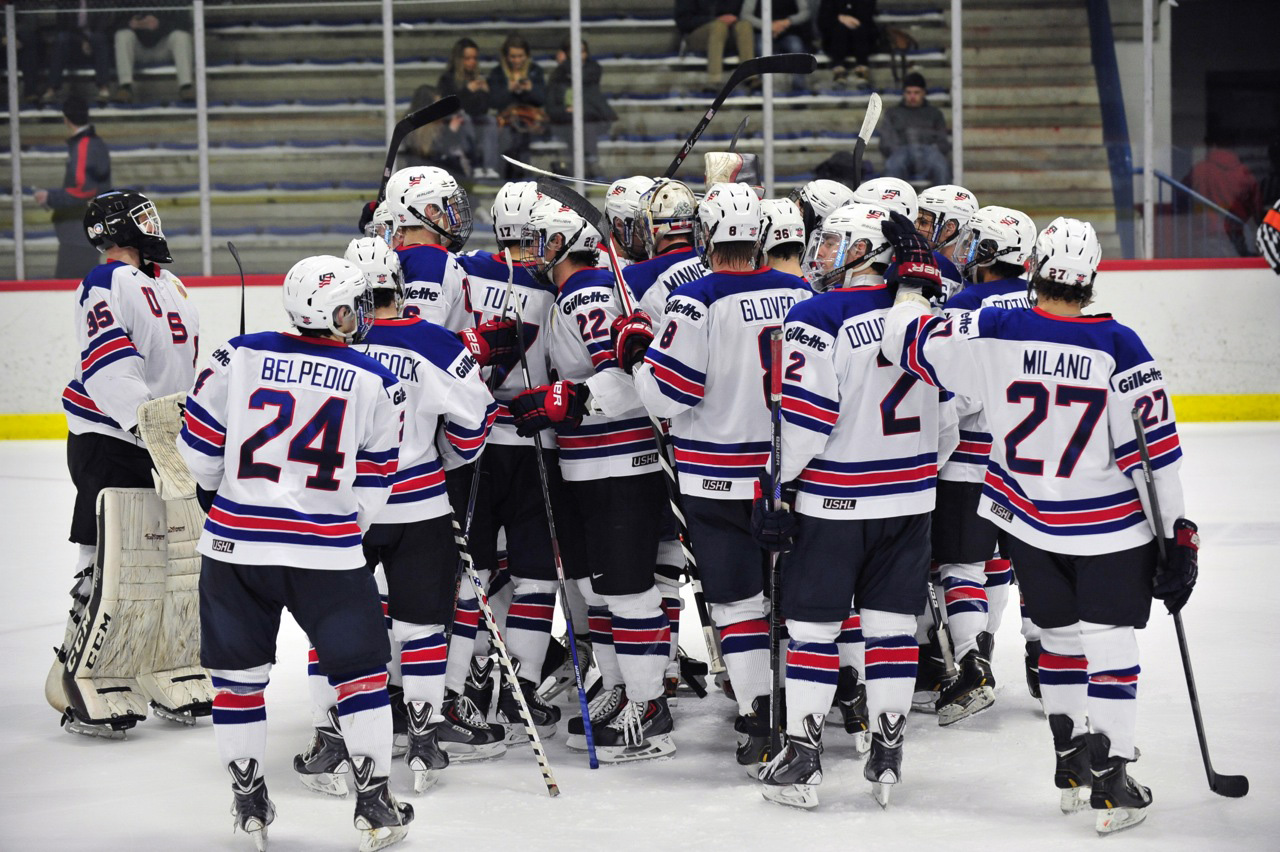 Shane Gersich (Chaska, Minn.) scored the first goal of the game for Team USA at 9:20 of the opening period. After Auston Matthews (Scottsdale, Ariz.) won a faceoff into the right corner in Omaha's zone, he collected the loose puck and attempted to stuff a wraparound through Hayden Hawkey's pads. Gersich picked up the rebound for the score. Eichel doubled the U.S. lead with a power-play marker at 17:55. Alex Tuch (Baldwinsville, N.Y.) unleashed a wrist shot that sailed high over the net, but bounced off the glass and into the slot where a scramble ensued. Sonny Milano (Massapequa, N.Y.) managed to swat the puck to Eichel who buried a shot through traffic. Omaha struck back with a power-play tally of its own with just 25 seconds remaining to cut the deficit to one goal.

Eichel had a chance to extend the U.S. back to two goals with a breakaway opportunity at 6:50 but was denied by Hawkey. The Lancers knotted the game at two goals apiece at the 9:34 mark before scoring late at 19:34 to take their first lead of the game, 3-2.

Team USA scored back-to-back goals at 11:16 and 12:58 of the final frame to restake a 4-3 lead over Omaha. Milano pulled the U.S. even at three. Eichel stole a pass after a delayed off-sides call and sent a sharp-angle shot that redirected off Milano and through Hawkey's pads. Larkin gave Team USA the lead with a backhanded shot from the middle of the left faceoff circle. Ryan Hitchcock (Manhasset, N.Y.) assisted on the play, feeding Larkin from behind the Omaha goal line. Anders Bjork (Mequon, Wis.) added a secondary helper. The Lancers scored with 5:08 remaining on the clock to force overtime.

Neither team could convert in the extra period, sending the game into a decisive shootout. Ultimately, Team USA managed three goals in the shootout to Omaha's two, with Larkin securing the win in the seventh round.

The U.S. National Under-18 Team concludes its 2013-14 home schedule tomorrow afternoon (March 30) when it takes on the Muskegon Lumberjacks at the Ann Arbor Ice Cube. The contest will open with a special tribute to the Under-18 Team as part of  "Senior Night". Puck drop is scheduled for 3:30 p.m. EDT.

Team USA outshot Omaha, 42-24 ... The U18s are 20-5-2 (W-L-OTL) this season versus teams in the USHL ... Edwin Minney appeared in his 70th career game with USA Hockey's National Team Development Team. That places the netminder tied for eighth all-time with Jack Campbell (Port Huron, Mich./2008-10) ... Jack Eichel is riding a three-game point streak, scoring one goal and adding five assists over that span ... Dylan Larkin is on a four-game scoring streak dating back to March 15. The forward has six goals in that span ... Ryan Hitchcock now has five points (1-4) in his past three games ... Auston Matthews registered one helper to add to his three-game point streak (2-1) ... Follow the NTDP on Twitter and Instagram and like us on Facebook ... Download the Sport Ngin Mobile App for Apple iOS and Android devices and follow the U.S. National Under-17 and Under-18 Teams. Fans, parents, athletes, and coaches now have unprecedented access to scores, stats, schedules, photos, and more. The app is free and allows users to track scores and news updates from one team. Those wishing to follow more than one team can make a simple in-app purchase of $1.99. Click here to download the app.