Under-17 Team Rallies to Defeat East-Leading Indiana in OT 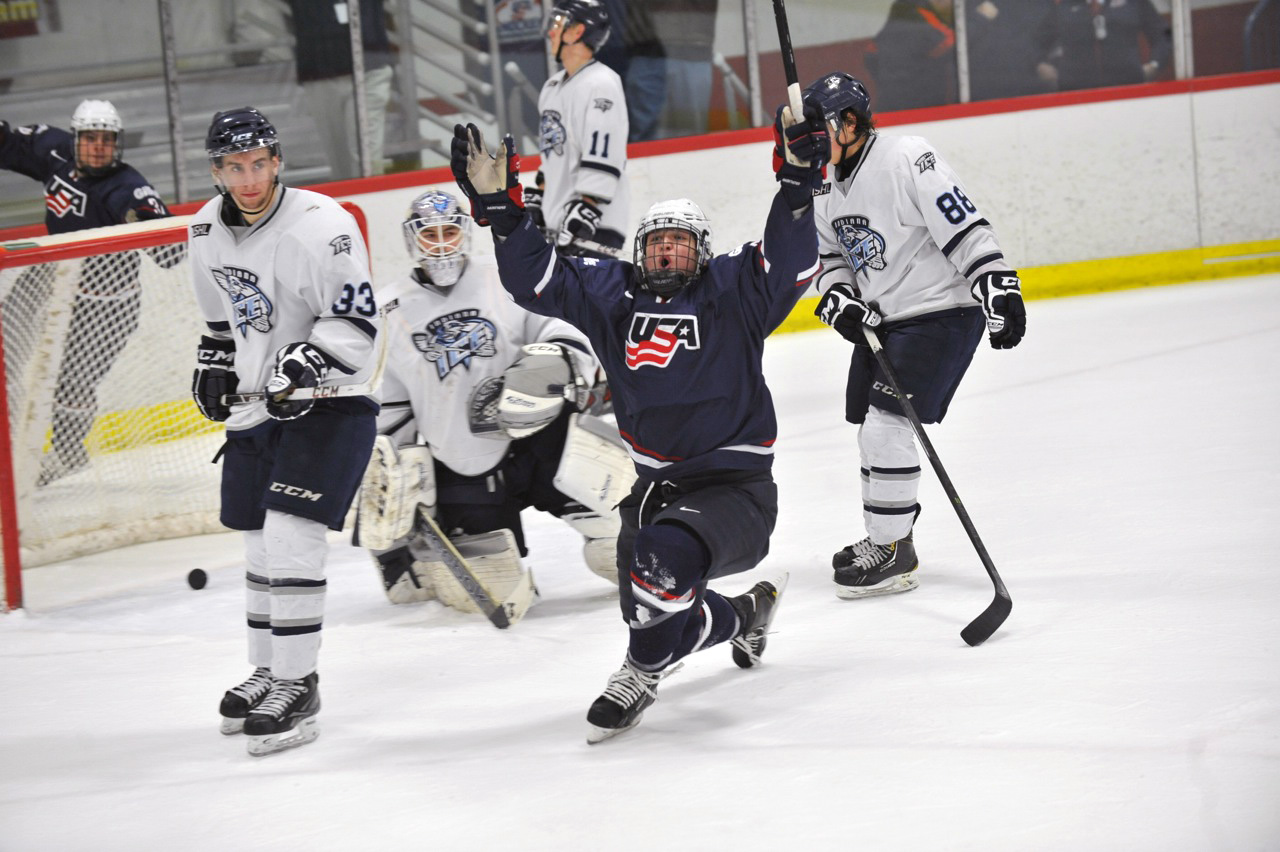 ANN ARBOR, Mich. - Christian Fischer (Wayne, Ill.) scored two goals, including the overtime winner, as the U.S. National Under-17 Team rallied to defeat the Indiana Ice, 6-5, here today at the Ann Arbor Ice Cube. This was the second overtime game in two days for the Under-17 Team.

Indiana opened the scoring at 3:37 of the first period. Team USA put 11 shots on net in the frame, but couldn't find the equalizer.

Matthew Tkachuk (St. Louis, Mo.) pulled the U.S. even at 1:34 of the second stanza. Jeremy Bracco (Freeport, N.Y.) put a shot off the stick of Indiana goaltender Jason Pawloski. The puck bounced to Tkachuk in the low slot and the forward dove and swatted it into the net.

Team USA took its first lead of the game 7:19 into the second period off the stick of Fischer. Auston Matthews (Scottsdale, Ariz.) zipped a pass to Fischer in the slot while falling down. Fischer deked around Pawloski and deposited the puck in the net. Indiana knotted the game at 8:13 and reclaimed their lead seven seconds into a power play at 14:28.

Indiana pushed its lead to 4-2 at 4:34 of the final frame. Matthews sliced the Ice lead in half with a five-on-three power-play goal. Two quick passes from Colin White (Hanover, Mass.) and Noah Hanifin (Norwood, Mass.) helped set up the play. Michael Floodstrand (Hinsdale, Ill.) tied the game once again with a short-handed marker at 16:18. After Brendan Warren (Carleton, Mich.) fed Floodstrand from behind Pawloski’s net, Floodstrand picked up his own rebound and deked around the goaltender to make it a 4-4 game. Indiana responded 1:42 later, but Luke Kunin (Chesterfield, Mo.) jammed home a wrap around with 21 seconds left to force overtime.

Fischer secured the 6-5 victory 1:07 into the extra stanza, lifting a drop pass from Matthews over Pawloski’s glove from the high slot. Charles McAvoy (Long Beach, N.Y.) also collected a helper on the play.

Michael Lackey (Washington, D.C.) had 26 saves in the win for Team USA, while Pawloski made 30 stops for Indiana in the loss.

The U.S. National Uner-17 Team will participate in the North American Hockey League's Top Prospects Tournament on Tuesday in Troy, Mich. Team USA will skate against the 18U Selects at the Troy Sports Center. Puck drop is scheduled fro 6 p.m. EST.

Team USA outshot Indiana, 36-31 ... Auston Matthews is riding a three-game point streak within the USHL dating back to Jan. 30. The forward has one goal and five assists over that span ... Follow the NTDP on Twitter and like us on Facebook ... Download the Sport Ngin Mobile App for Apple iOS and Android devices and follow the U.S. National Under-17 and Under-18 Teams. Fans, parents, athletes, and coaches now have unprecedented access to scores, stats, schedules, photos, and more. The app is free and allows users to track scores and news updates from one team. Those wishing to follow more than one team can make a simple in-app purchase of $1.99. Click here to download the app.