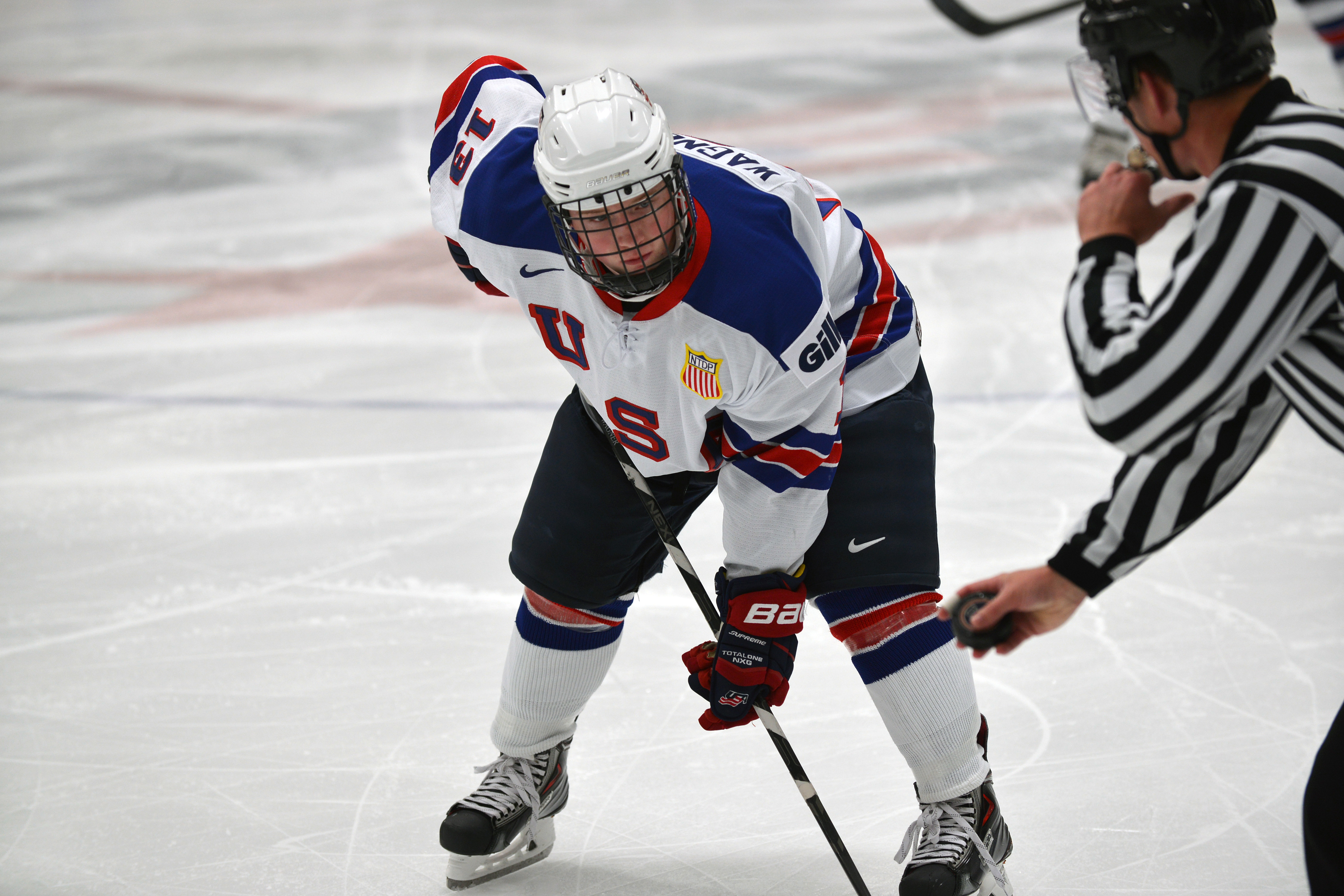 Ryan Wagner lines up to take a faceoff in USHL action. Photo by Tom Sorensen.

It’s the day when Wagner and his Team USA cohorts face the University of Minnesota-Duluth on the road. More importantly for Wagner, the game marks a family rivalry in which Wagner faces off against his older cousin, Austin Farley.

“My cousins, who lived about five minutes away from me, got into hockey,” explained Wagner, who grew up in Park Ridge, Ill. and started skating when he was 3. “They had a rink in their backyard, and I was just skating every single day I could. I was basically their eighth brother.

“My cousin, Austin, has been a huge role model for me. I have always watched him and learned from him. I would always go to watch his games, and he would always give me pointers. Every time I was over at his house, he would show me how to shoot the puck or how to stride.”

It should be no surprise that one of the first phone calls Wagner received after committing to USA Hockey's National Team Development Program was from Farley.

“I think he was a little jealous, but he was extremely happy for me,” Wagner said. “He called me as soon as he saw it. He was so happy for me, plus I get to play against him this year. With all the help he has give me, he was basically my coach growing up.”

Wagner, who spent the past two seasons with the Chicago Mission Midget Minor program, joined the NTDP for the Under-18 season. It can be a difficult transition coming in as a one-year player, but Wagner said his teammates have made him feel right at home.

“It’s a tough transition, but the team has been nice and welcoming,” the 5-foot-8, 173-pound forward said. “They have explained the rules and given me pointers at school, at the rink and during workouts. It’s everything to help me get ahead of my game. It’s a big jump from AAA, but they are really supportive. Practice makes me better every day.”

Wagner knew some of his NTDP teammates before coming into Ann Arbor, having played with Louis Belpedio for three years and Anders Bjork for two in the youth ranks. Wagner also had the advantage of having played for the U.S. Under-18 Select Team that placed second at the Ivan Hlinka Memorial Tournament in early August in the Czech Republic and Slovakia. Wagner notched one goal in five games and also was able to work with NTDP assistant coach John Gruden.

“It’s helped with game experience,” Wagner said. “Coming from AAA, it would have been a huge jump to the USHL. The tournament helped me a lot to improve on key little details. It was a lot faster than I was used to. It was good to jump into it and play against some high draft picks. It was good to see the competition ahead of me.

“It was great having Coach Gruden out there. He ran a lot of drills in the practice, and it’s basically the same thing. He’s a great coach and messes around with us. Once it comes game time, he is serious but still very helpful.”

Plus Wagner was able to step out onto the ice wearing a USA sweater.

“I got a little taste with the Hlinka tournament,” he said. “It’s a true honor to put it on. Not a lot of kids get to say they have worn a USA jersey. I’m just excited.”

Wagner will take his game to the University of Wisconsin following his only season with the red, white and blue. It was an easy decision for him to join the Badgers.

“Going to Wisconsin, it’s about two hours from home,” he said. “I know about five guys who have already committed there. I’m a shy kid, so it’s nice knowing that once you get there, I will already know guys and feel comfortable already.

For now, Wagner is settled on making the most of his only season with the NTDP. 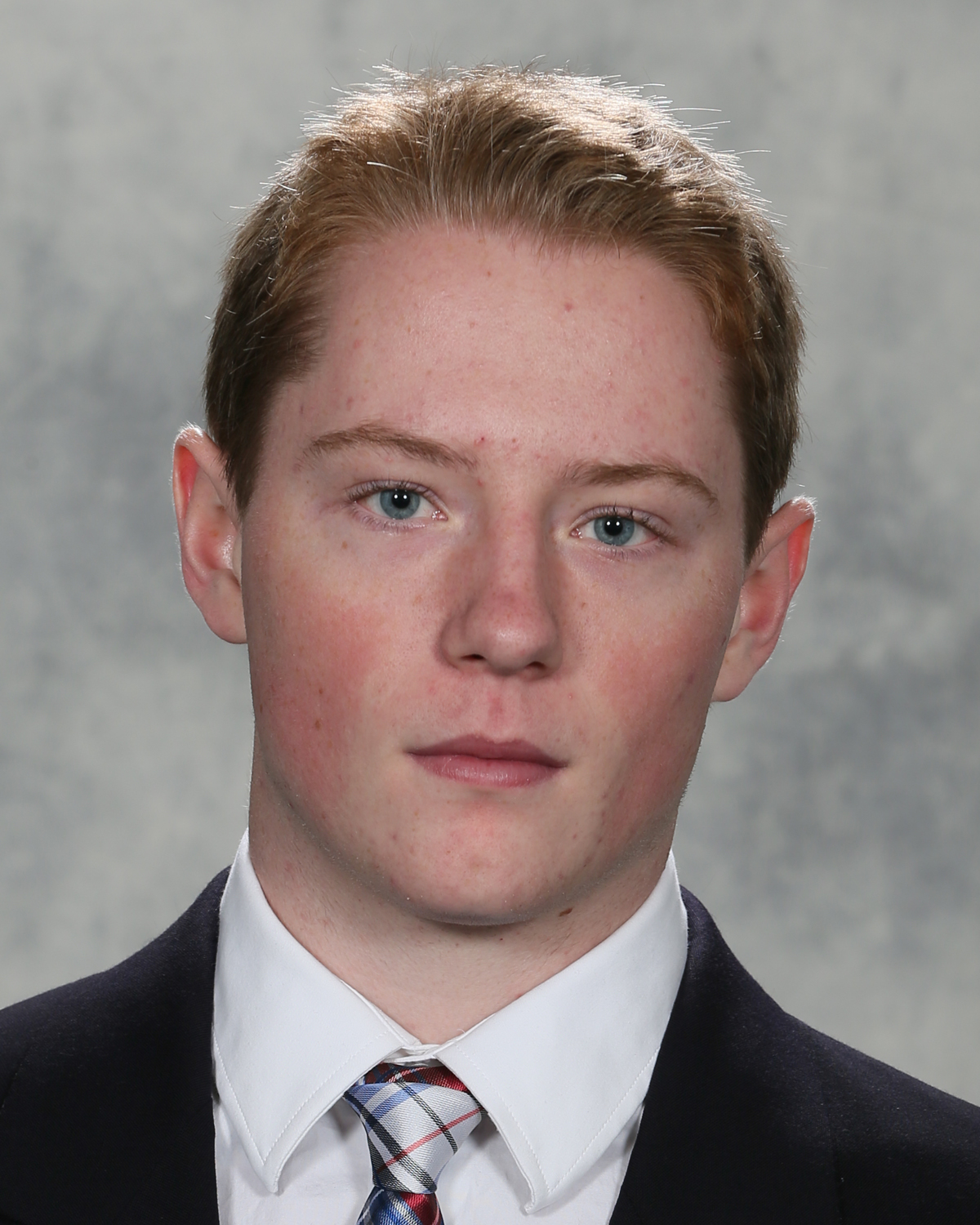 Favorite Sport (Outside of Hockey)
Soccer