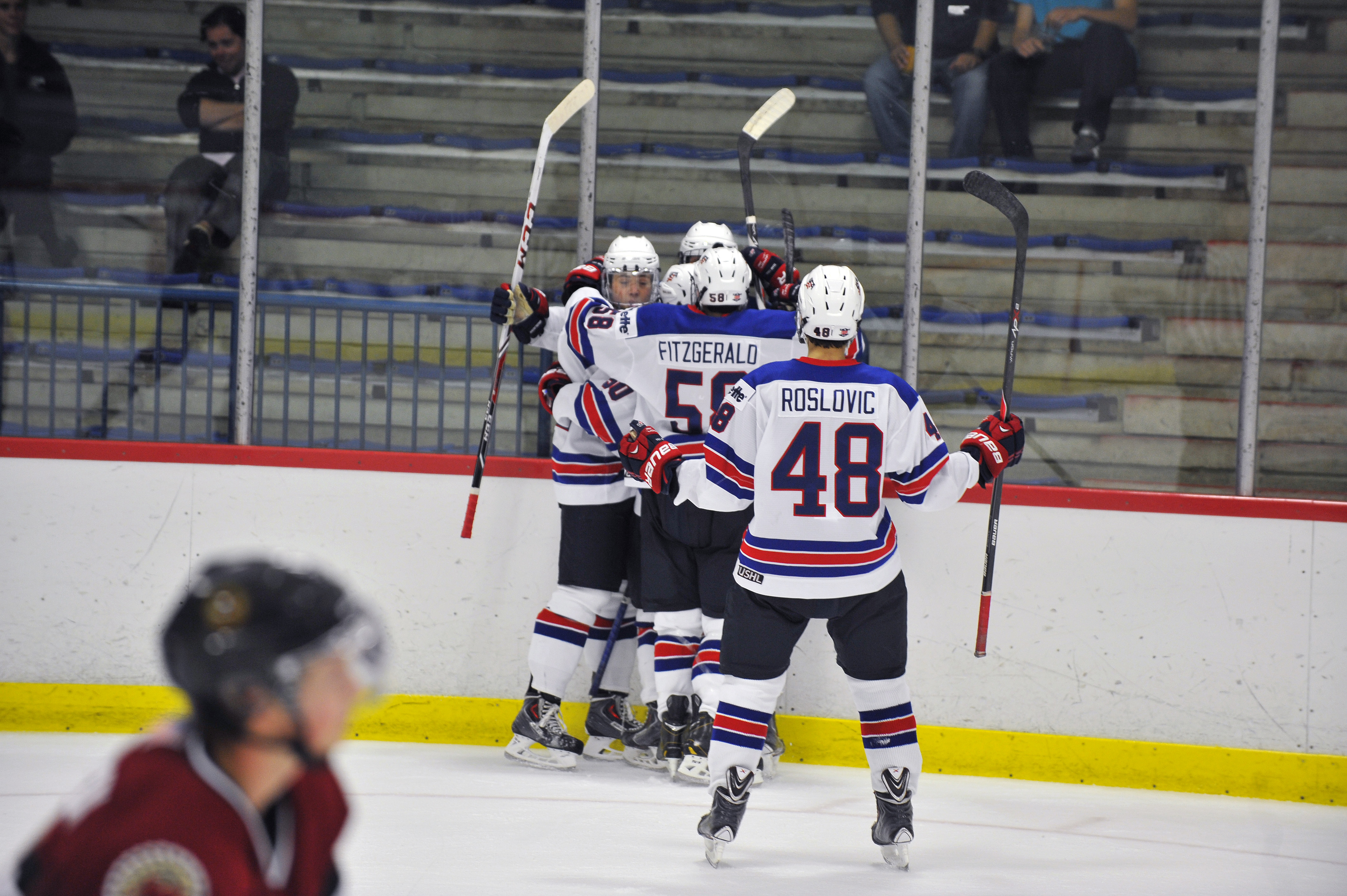 Jack Roslovic skates to join his teammates in celebration after a goal versus Muskegon. Photo by Tom Sorensen.

He is a local hero in the Columbus (Ohio) Hockey Association and someone future players will look to for guidance. After all, Jack Roslovic enters the season as the first player born and raised in central Ohio to play for USA Hockey’s National Team Development Program.

He can only thank his next-door neighbors for his start in hockey.

“My neighbors got me interested in hockey,” explained Roslovic, who was born in 1997. “Their kids were close to me. Their family was amazing. They had two kids [born in 1993 and in 1995]. We played in their backyard for countless hours. I think I went over to their house for at least 20 minutes a day for a year.

“I remember just playing out there. It would be 4 p.m. when I strapped on the Rollerblades, and when it got to 7, my mom would be furious. They had a gated area and it was street hockey, and I would be out there until 11 [when I could]. My mom would have to come over and scream at us. From her bedroom window, she could see and hear us. She could hear us having fun and hear if someone got hurt. She noticed everything.”

The backyard games turned into official games on the ice rink, and Roslovic spent the last five seasons playing in the Ohio Blue Jackets organization. He received the call to join the NTDP following the tryout camp this past April. As soon as he received the call, his emotions were running wild.

“I was thinking about all the things that I came through, where I started and where I am now, how I got it,” he said. “The experiences I had, the road that I went through, it really all kicked it. Hopefully this will not be the last spot I am [at in hockey].”

His dad John gave him some words of advice for his hockey career.

On Aug. 26, the 6-foot, 167-pound forward arrived in Ann Arbor, Mich. for his first season with the red, white and blue. His mom Jane provided some words of wisdom before he left home.

“My mom always said it’s like you are going to camp,” he said. “It’s been a while since I left, but I’m so occupied that it has gone by unbelievably fast. You realize how fast it goes by with practice every day, school every day and having fun with the boys. It just flies by.”

Plus, the training, both on and off the ice, keeps him busy. He is learning how to become a more complete player.

“On ice, I have never played any type of hockey like it,” he said. “Columbus is great, but the competition here is what they say it is. It is the best 97s in the country playing for one team.

“I have great speed for the most part. It’s [about learning] patience and slowing down my speed a little bit to make better plays and keep my head up. Defense is just huge. I came in here really strong because my trainer at home, he was a well-educated trainer. The off-ice training is max; it’s just huge.”

One of his early highlights from preseason camp was when former NTDP blueliner and current Columbus Blue Jackets defenseman Jack Johnson (Faribault, Minn./2003-05) came to speak to the team.

“He was talking about loving it here — every single second of it, the ups and downs,” Roslovic recalled. “He said he loved the downs and loved the ups even more. He was really positive and upbeat. He’s an NHLer, so we obviously look up to him, and it was fun to hear his point of view and perspective.”

Nothing could prepare Roslovic for the first time he saw the USA jerseys hanging up in the stalls when he walked into the locker room before the home opener on Sept. 13. As he slipped the sweater over his head, chills just came over him.

“It was just a huge honor,” he said. “Seeing that made me pretty speechless. I was asking my friends — would it be weird to take a picture? You can’t even describe it. It’s the greatest feeling, just looking at it and realizing it’s your own jersey with USA on it.

“When I looked down at it, I had the chills. I had the chills basically from putting it on to the national anthem and throughout the entire game. It was a great atmosphere and I had a lot of friends there.” 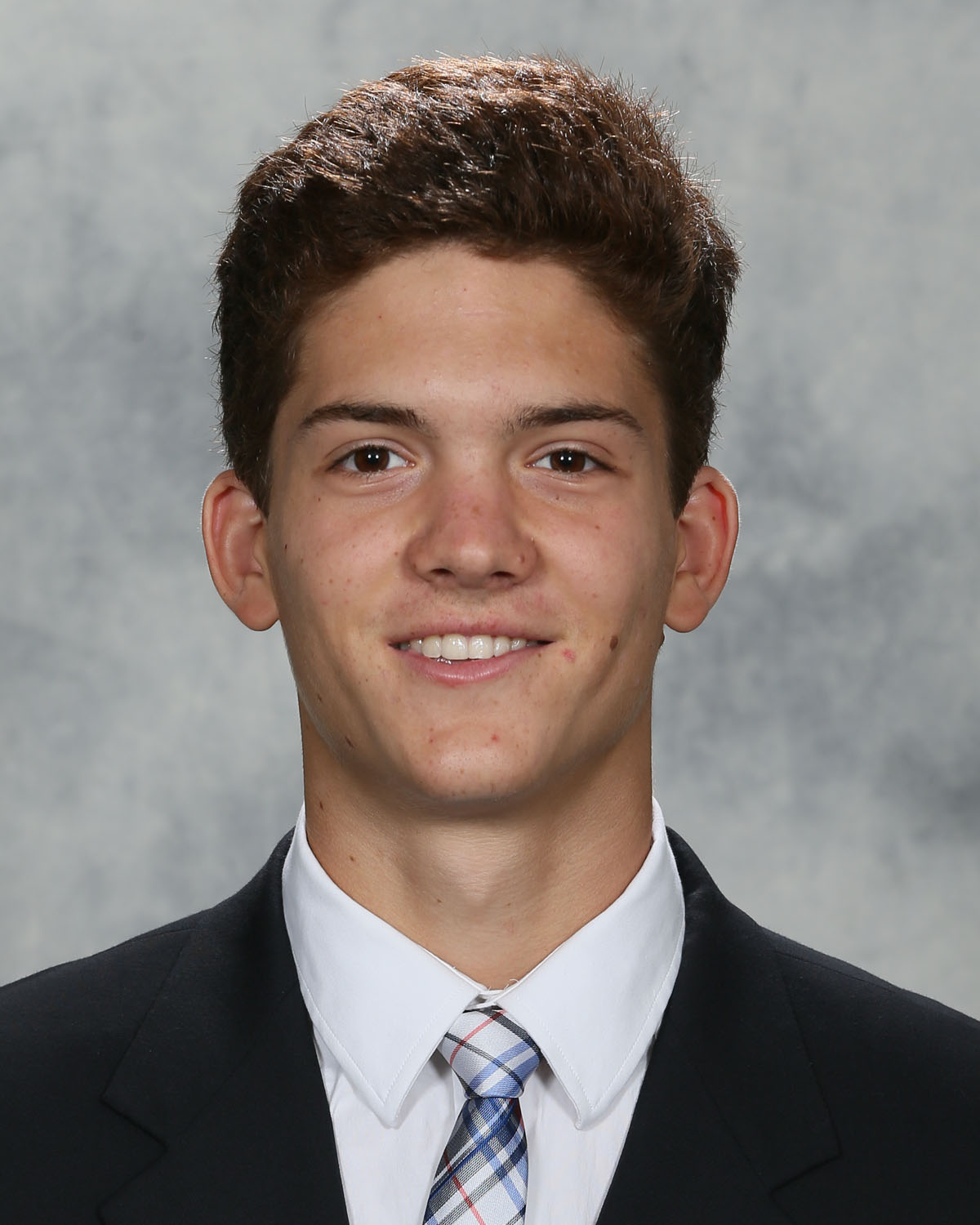 Favorite Book
Catcher in the Rye