Tkachuk Nets Goal in Regulation, Shootout to Lift Under-17 Team Over Janesville, 4-3 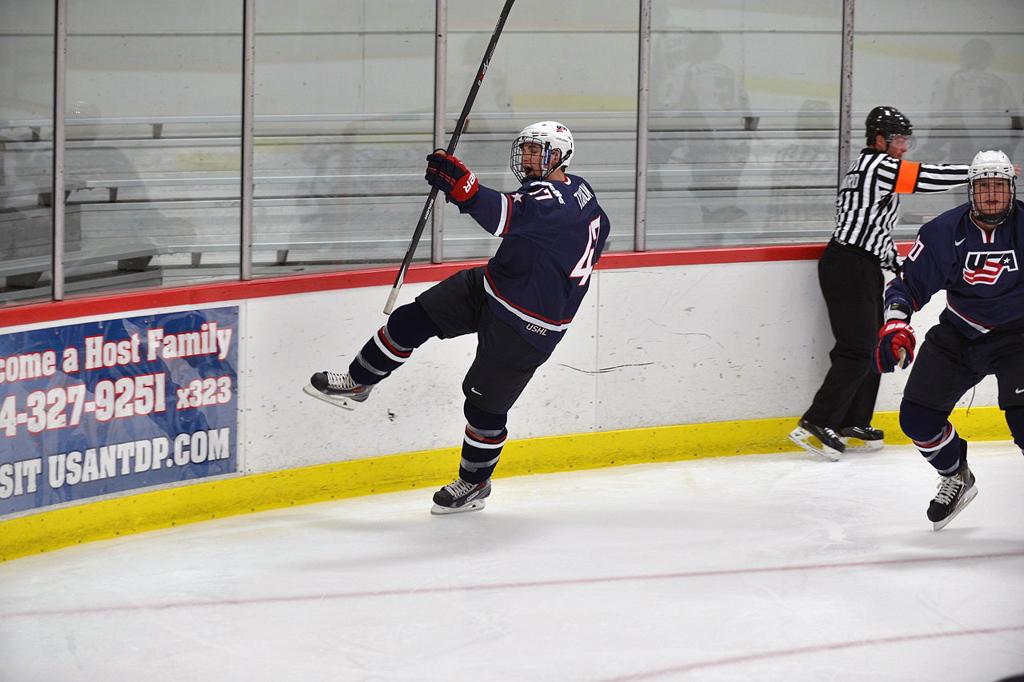 Matthew Tkachuk celebrates after scoring in the second period versus Janesville. Photo by Tom Sorensen.

ANN ARBOR, Mich. – Matthew Tkachuk (St. Louis, Mo.) scored once in regulation and once in the shootout, while Noah Hanifin (Norwood, Mass.) registered two assists and scored the game-winning shootout goal as the U.S. National Under-17 Team clipped the Janesville Jets, 4-3, here tonight at the Ann Arbor Ice Cube.

After an offensive outburst that saw Team USA score 12 times against Janesville last night (Sept. 13), the U.S. once again took an early lead over their North American Hockey League opponent when Brendan Warren (Carelton, Mich.) netted a short-handed goal. After intercepting a pass in the neutral zone, Warren skated down the right boards and fired a shot that beat Janesville goaltender Reed Kinsey high over his glove.

Christian Fischer (Wayne, Ill.) doubled the U.S. lead at 3:50 of the second stanza. Grant Gabriele (Ann Arbor, Mich.) had the initial shot on goal that set-up Fischer with the rebound opportunity. Tkachuk extended the U.S. advantage, 3-0, at the 7:21 mark. Charles McAvoy (Long Beach, N.Y.) slid the puck across the blueline to Hanifin, who blasted a shot low toward the net. Tkachuk picked up the rebound and buried the puck in the wide-open net before Kinsey could recover.

Janesville responded quickly, however, netting their first tally of the night just 38 seconds later. The Jets slashed the U.S. lead to one goal at the 15:36 mark with a wrist shot from the top of the right faceoff circle that rang off the crossbar before falling into the net.

Janesville potted the equalizer 5:21 into the final frame. Both teams saw chances to seize the lead during the remainder of the game, including a Jets breakaway with 29 seconds remaining, but U.S. goaltender Luke Opilka (St. Louis, Mo.) made the stop.

When neither team found the back of the net in overtime, the game was sent to a five-round shootout. Janesville missed the net in its first attempt before Colin White (Hanover, Mass.) backhanded the puck over Kinsey’s blocker, sending the water bottle flying off the net.

After the Jets fired a snapshot over Opilka’s right leg pad to tie the shootout, Tkachuk scored on a highlight-reel move. Skating in slowly toward the net, Tkachuck made several fakes to pull Kinsey to the left. As Kinsey slid to make the save, Tkachuk used a backhand toe-drag to the right to regain the U.S. lead in the shootout.

Opilka poke-checked the next Janesville shooter and Hanifin netted the eventual game winner on a rocket that beat Kinsey on the blocker side. In the fourth round, the Jets shooter banked a shot off the post to beat Opilka before Luke Kirwan (Dewitt, N.Y.) rang his shot off the post and into the boards. Opilka sealed the win for Team USA in the final round, sliding to his right to make a pad save.

The U.S. National Under-17 Team next faces the Youngstown Phantoms on Sept. 21, in its first contest within the United States Hockey League. The game is set for 3:30 p.m. ET at the Ann Arbor Ice Cube. The game will be broadcast live on FASTHockey.com.

Team USA outshot the Jets, 45-33 ... Download the Sport Ngin Mobile App for Apple iOS and Android devices and follow the U.S. National Under-17 and Under-18 Teams. Fans, parents, athletes and coaches now have unprecedented access to scores, stats, schedules, photos and more. The app is free and allows users to track scores and news updates from one team. Those wishing to follow more than one team can make a simple in-app purchase of $1.99. Click here to download the app.

Three Stars of the Game