Player Feature - After Injuries, Weyrick Shines for U17 and U18 Teams 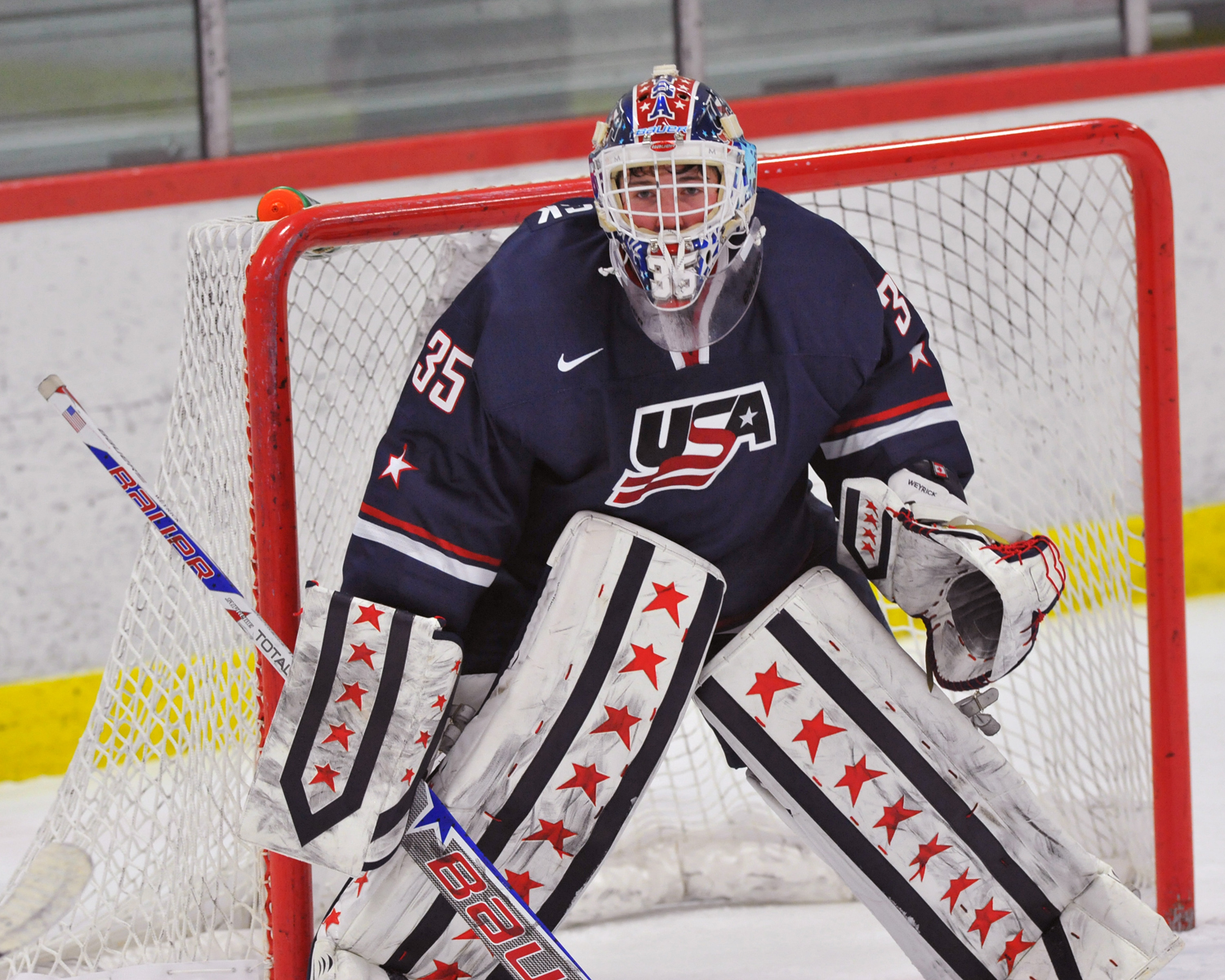 Weyrick battled injury, eventually earning a spot on the U.S. National Under-18 Team that competed in Sochi, Russia. Photo by Tom Sorensen.

Not many kids in Ojai, Calif., were playing hockey when Blake Weyrick was growing up. That never slowed him down.

Weyrick began playing roller hockey at age 8 and ice hockey at age 9, even though the nearest ice rink was 45 minutes away. Eventually Weyrick’s parents, Michael and Mimi, began chauffeuring their son almost two hours each way to Los Angeles so he could play at a higher level.

The dedication paid off when Weyrick, a goaltender, accepted an invitation to join USA Hockey's National Team Development Program in Ann Arbor, Mich. Weyrick just wrapped up his first season in which he played with both the U.S. National Under-17 and Under-18 Teams.

“To wear the USA on your chest is a big thing, and to compete for championships, it is always something that you dream of,” he said. “It all stems from that.”

“When I first started getting into hockey, I think it was a shock to [people in Ojai]. I’m here and doing this, everyone is happy for me and supports me. It’s fun to see them during the summer and talk to them. They are excited for me.”

After beginning his hockey career in Southern California, Weyrick moved to Shattuck-St. Mary’s, a boarding school in Faribault, Minn. that counts players such as Sidney Crosby, Zach Parise and Jonathan Toews as alums. After two years in southern Minnesota, Weyrick moved on to Ann Arbor in 2012.

There was some culture shock moving from Southern California to hockey mad Minnesota and Michigan, not to mention an increased level of competition, but Weyrick got some words of advise from another California NTDP alum — Emerson Etem, who is now with the Anaheim Ducks.

“It was cool to talk to him about the experience he got here and then at World Juniors [for Team USA],” Weyrick said. “He told me what it was all about and the work it takes. It was helpful for me and it really made me want to come here even more.”

Having already lived away from home for two years, the transition to Ann Arbor wasn’t too difficult, Weyrick said. However, missing the first four months of the season due to injury made for a difficult transition on the ice.

“Physically, it was a struggle trying to get back to game shape,” he said. “There was nothing I wanted more than to get back and help the team win. Mentally, I was prepared and ready to go. Obviously, at first, it was weird taking a bunch of time off the ice, but when I came back it was a challenge. In the end, it made me a lot better.”

The highlight of the season, Weyrick said, was having the opportunity to go with Team USA to the 2013 International Ice Hockey Federation Under-18 World Championship.

“It is something you dream of,” Weyrick said. “I was really fortunate they wanted to take me and I’m thankful for that opportunity. It was an unbelievable experience with the ‘95 group. Being part of the team and being with the guys was really special. It was a two-year journey for them and to see what it comes down to and getting to see what it met to them. It was valuable.”

Weyrick also took some time to take in words of advice from fellow California native and U18 netminder Thatcher Demko.

“One of the things he helped me with was to stay calm and don’t get ahead of yourself in situations,” Weyrick said. “He would tell me to breathe and relax. You are confident in your abilities and just go out and play. It was a pretty big point he told me.”

The ups and downs of Weyrick’s first season have helped him set goals for his second season with the NTDP, with winning the U18 World Championship at the top of the list.

“That is the end goal, the end result of our time here,” he said. “It is something I want and something the team wants. We want to prove ourselves in international competition next year and against the NCAA. We are excited for that and to prove what we are capable of. I think it will be fun to play in those games next year; I can’t wait for that.”