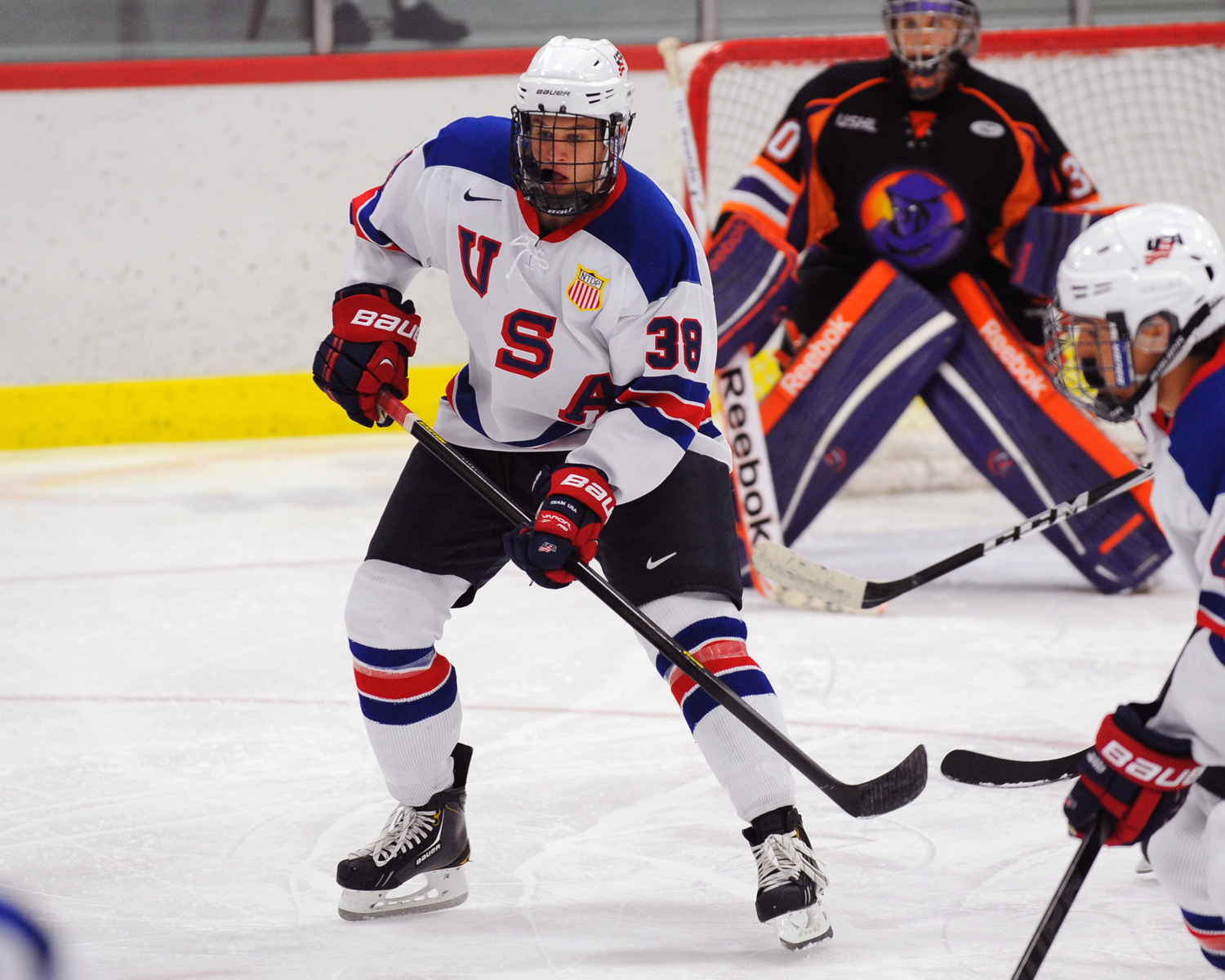 Bjork grew to love the game at an early age, playing pond hockey in Wisconsin. Photo by Tom Sorensen.

Perseverance is something that Anders Bjork takes to heart. After all, it’s something small his dad drilled into him when he was growing up.

“He instilled in me that perseverance is key,” Anders said of his father Kirt, a former Notre Dame player who went on to enjoy a professional hockey career as well. “Even when things are not going your way, you need to keep on going and going and eventually, everything will work out.”

For Anders, that perseverance has led to USA Hockey's National Team Development Program in Ann Arbor, Mich., where the 5-foot-11, 177-pound forward scored 12 goals with 24 points in 56 games in his first season while playing for the U.S. National Under-17 squad.

“It’s unbelievable putting that jersey on,” he said. “You can’t really describe it. Representing your country, it’s an honor every day even in practice and especially in games wearing the jersey is the best feeling I’ve ever had. I’m honored to wear it.”

Bjork’s journey to Ann Arbor began on the frozen ponds in Mequon, Wis. Growing up, hockey was always a part of his family. In addition to Kirt’s college and pro career, Anders’ uncle, Dave Arkeilpane, won an NCAA title with Michigan State and his cousin, Erik Condra, is a right wing for the Ottawa Senators.

Anders started skating around age 4 when his older sister Brinya was on a team and Kirt was her coach.

“I played a lot of pond hockey when I was a kid and I really loved it,” Anders said. “My dad got me into it. Ever since then, my family played, my cousins played and I just loved hockey.”

Kirt coached Anders until his son was a Peewee.

“It was pretty tough,” Anders said. “He was hard on me, but it definitely made me better. He is really the reason I am the player I am today so I’m really thankful.”

As Anders rose through the ranks of youth hockey, he set a goal of one-day playing for the NTDP.

“Some of the guys from the Chicago Mission program where I played came here,” he said. “I wanted to be like them and I looked up to them. I could see how much they succeeded from the program.

“I knew [former players] Ryan Hartman and Thomas Di Pauli, along with current [U18 members] J.T. Compher and Will Butcher. The first weekend, they told me to keep working hard and make the most of it. It goes by fast. I have to work hard every day.”

Plus, Bjork already had a “connection” to U17 coach Danton Cole. Arkeilpane and Cole were teammates at Michigan State as the duo helped the Spartans capture the 1986 NCAA title.

Still, the transition from Midget Minor to playing against United States Hockey League and college competition is never easy.

“Perseverance is really key here,” Bjork said. “Every day you have to keep going and his advice really helped me.”

One of Bjork’s favorite memories from 2012-13 was winning the Four Nations Tournament in November in Switzerland, but more than anything he said he has enjoyed getting to know his teammates this season.

“They are pretty much like family now,” he said. “There are a lot of guys when I first was talking to them and I realized I didn’t know anything about them. We have become all so close and it’s great to be around them.”

Bjork plans to be back in Ann Arbor in 2013-14 to play with the U18 team before moving south to play for Notre Dame, following in the footsteps not only of his father and of Condra, who played on Notre Dame’s 2008 Frozen Four team, but also following his mother and two sisters to South Bend.

“My family has been going to Notre Dame football and hockey games since forever I guess,” he said. “It has always been my dream to go there and play there. They have a great program and it is growing. I am very happy that I have the opportunity to go there.”

And with a little perseverance, don’t count Bjork out for anything.