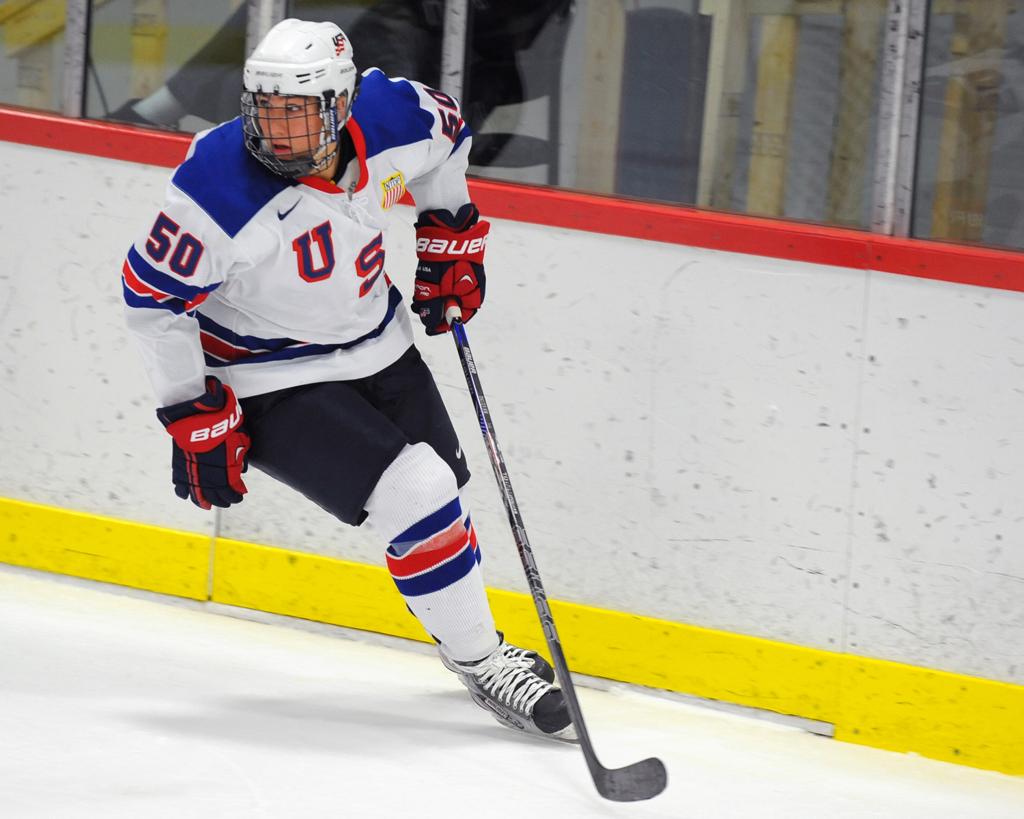 Pavelek plans to train all summer in his hometown of Marysville, Mich. Photo by Tom Sorensen.

Drive past the football field in Dylan Pavelek’s hometown of Marysville, Mich. this summer, and more than likely the National Team Development Program forward will be out there working to improve his game.

“I will be very self-disciplined. I did that last season and plan to have the same dedication this summer,” said Pavelek, who will return to Ann Arbor this fall for his second year with the NTDP. “My quickness and agility: That is the biggest part I will work on this summer, and my decision making. I will keep working on that the best that I can. Sprints and quickness drills on the football field and, of course, in the weight room.”

Pavelek, a 5-foot-11, 180-pound forward, started playing hockey at age 3. It didn’t take long for him to figure it was the sport he wanted to play. 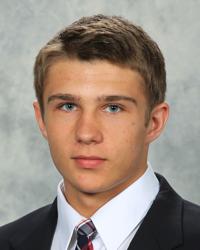 Pavelek wants to take the challenges presented to him last season and learn from them. Photo by Dave Reginek.

“The fact it was such a hard sport to play and [that there are] so many skills that you need to play the sport,” he explained. “I played baseball and soccer for a year to see if I would like them, but I ended up sticking with hockey.”

When he was 14, he heard about the NTDP and set the goal of playing for Team USA someday.

“When I was 14 years old, it was brought up to me,” he recalled. “I looked up to the guys and would be like, ‘Wow, he plays for Team USA.’ I wanted to make it my goal to be here, and it finally came true.

“I knew [former NTDP forward] Rocco Grimaldi. He played for Little Ceasar’s and was around the rink a lot.”

Prior to coming to the NTDP, Pavelek had the experience of suiting up for Team USA as a member of the U.S. Under-17 Select Team that won the Five Nations Tournament in the Czech Republic in August 2012. He netted two goals and finished with five points in five games.

More than anything, the experience helped him with his transition to the NTDP in the fall.

“It was hard at first, but after five or six games I got used to it, especially the physical play and the quick decisions that you have to make,” Pavelek said. “It was as hard as I thought it would be and it was definitely a step up.”

When he looks back on this past year, he remembers the challenges and what he learned about himself. That has helped Pavelek continue to push himself to get better.

“The coaching staff kept pushing me. They kept me positive and keep my confidence up. We had some ups and downs this year, and with the downs, they really pushed me to get better.”

Pavelek said wearing the colors of his country means the world to him, and the honor of wearing the red, white and blue helps keep him motivated to constantly improve and get better.

“Everyone says that words can’t explain,” he said. “It’s an honor. I love doing it everyday and I wouldn’t trade it for anything in the world.”