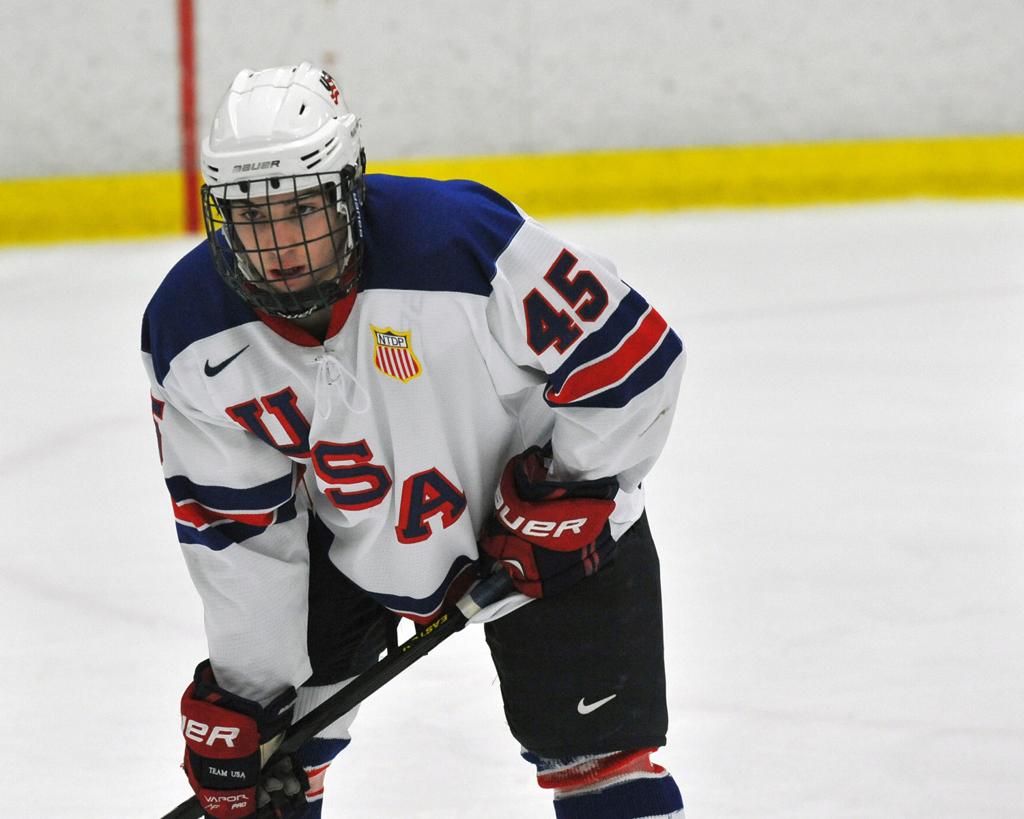 After growing up a coach’s kid, Louis Belpedio still remembers some words of advice his dad, also named Louis, used to emphasize.

“Always work hard and compete,” the younger Belpedio recalled his father saying. “That is one thing I need to do to take pride in my game. I’ll never forget the first time he said that to me, and he still repeats it to this day. I was five when he first said that, but he always told me to work hard and have fun, and it will all be easy for you.”

The Skokie, Ill., native, who just wrapped up his first season with USA Hockey's National Team Development Program in Ann Arbor, Mich., fell in love with hockey from the moment he stepped out onto the ice when he was 3. 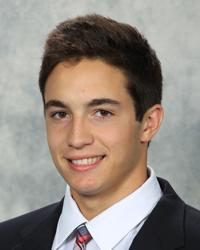 Belpedio lives by words his father told him at an early age. Photo by Dave Reginek.

“It felt more free than other sports,” he said. “The first time I stepped on the ice, I loved it right away.”

Even on the ice, being a coach’s kid had another side. He started out as a defenseman, moved to forward when he was 7 and then went permanently back to the blue line when he was 11.

“I didn’t really have a choice,” he said. “My dad was always an assistant coach on my team when I was growing up. He always coached the defenseman, and he would call me back there and wanted me to stay there.

“At times it was tough having him as a coach. He knew he could get mad at me over other kids. As I grew up, it got easier to take.”

“It was a dream come true,” he said. “It was something I knew I wanted to do since I was a little kid. I worked hard at it every day and it finally paid off.”

Belpedio came into Ann Arbor already knowing U.S. National Under-18 Team players Anthony Louis and J.T. Compher. They gave him a little preview of what he should expect when he arrived.

“Anthony told me to work hard and to not worry about what was going to happen, rather play your game,” Belpedio recalled. “That is really what I did and didn’t try to be anyone else. It worked out in the end. They said it was going to be tough but at the same time, it is going to be fun.”

Belpedio, who played in all 56 games for the U.S. National Under-17 squad and finished with one goal and 12 points, said he learned a lot about himself this past year.

“I think the big thing is to battle through things,” he said. “Playing U16 last year to the USHL was a huge jump for me. It was hard to get used to at first. Getting used to it over time, it seemed to get easier and easier. That is what helps me now, knowing how to battle through certain situations.”

It also helped that the coaching staff worked with him on a daily basis. He credits watching video with assistant coach John Gruden as a big part of his success.

“Whenever I ask him to watch video, the next day he always has it ready for me,” he said. “That is one of the biggest helps for me, sitting with him 1-on-1 and knowing that he takes the time with our D partners too. That always helps to gain chemistry with your partner.”

One of Belpedio’s favorite memories came early in the season at the Four Nations Tournament in Switzerland, when Team USA beat Russia 5-4 in a shootout.

“It was a good game,” he said. “We went down to start the game and we battled back and even had two goals called off. In the end, we won in a shootout. I think it was a good experience for us — we all came together as a team.”

After training this summer, Belpedio is looking forward to next year’s schedule including games against collegiate competition as well as the USHL and international play.