Player Feature - Stevens Takes in a Moment with Stanley 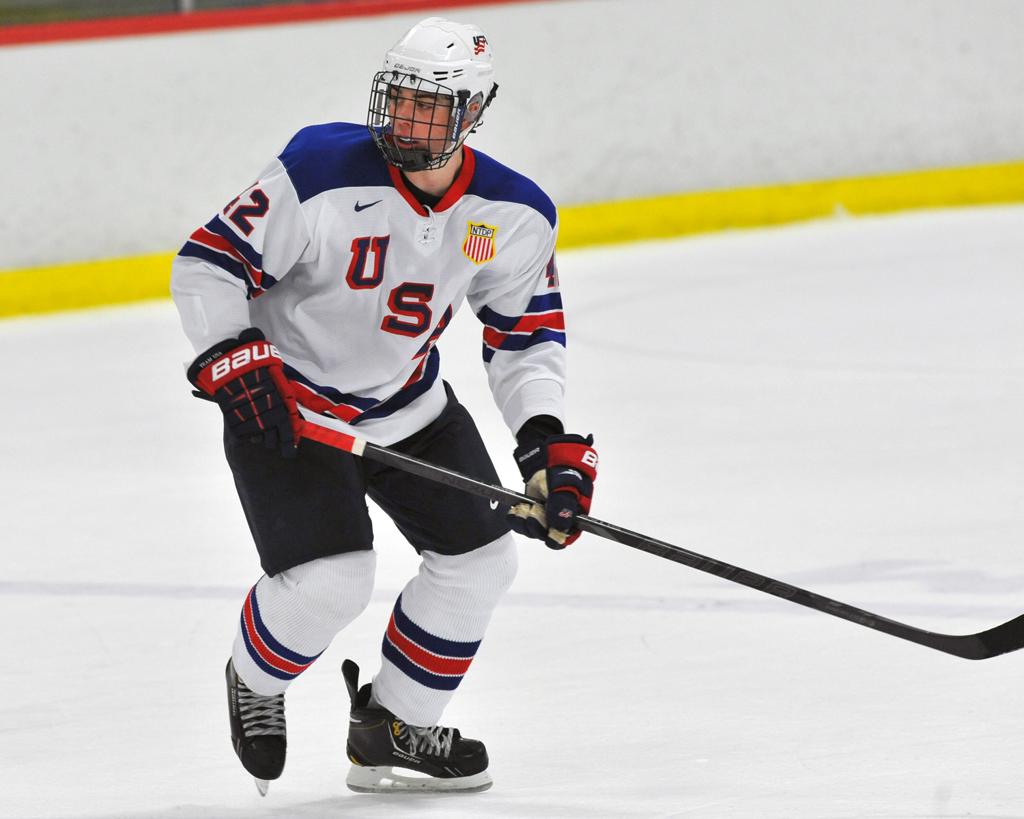 “I went to all the home games and the playoffs,” said Nolan, a Los Angeles Junior Kings alum whose father, John, is an assistant coach with the NHL team. “We were on the ice after and in the locker room, and something like that really opens your eyes. It gets you thinking that could be you one day. You see how hard the guys worked and how happy they were that it has finally happened. It’s special for me and was a privilege to be watching that.

“We had the Cup for a day and a half, and we took it to my dad’s hometown in Turkey Point [Ontario]. It was fun. We took a lot of pictures. It’s something I’ll never forget for sure.” 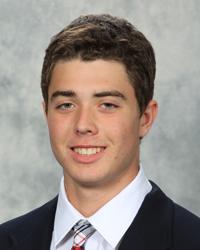 Stevens waited a while to don the red, white and blue. But it was worth the wait. Photo by Dave Reginek.

Nolan, a 6-foot-2, 186-pound forward who just wrapped up his first season with the USA Hockey's National Team Development Program, grew up in a hockey family. His father played 14 seasons in the AHL and NHL and has coached in both leagues. Meanwhile, his older brother, also named John, recently finished his first season with the United States Hockey League’s Dubuque Fighting Saints.

“I was always around it and grew up around it,” Nolan Stevens said. “My whole family plays, including my cousins. It was a big part of our lives growing up. It was something that I could always go back to. Being on the ice is my sanctuary. No matter what kind of day I had, I can go out there, forget everything and have fun.”

Even though John Sr. grew up in Canada, he was supportive of Nolan’s decision to come to the NTDP and continue his hockey career. However, there is still a “little rivalry” in the house.

“My dad grew up around USA Hockey, but when it comes to the Olympics it’s Canada for sure,” Nolan said. “There is a little rivalry.”

Then again, brother John might have some bragging rights this summer after Dubuque won the USHL’s 2013 Anderson Cup (regular season) and Clark Cup (playoffs). The two brothers played against each other a few times later in the season.

“We get along great,” said Nolan, who admits he has always looked up to his older sibling. “We usually train together in the summer. I didn’t say anything during the games, but we would go to dinner after the game.

“He told me that it won’t be as hard as you think it is, just play your game and you will be fine.”

Despite missing part of the season due to injury, Nolan Stevens finished with three goals and eight points in 25 contests. For him, the most special part was finally being able to don the USA sweater.

“It’s special. I didn’t get to partake in that until five months into the year,” he said. “The first time I put it on, I will never forget it. I just remember standing there and looking at the jersey. I just take it in. I know I can’t take it for granted at all since not everyone gets to wear it.”

It also helped Nolan that this dad offered some words of advice that he took to heart while he was waiting to get on the ice this season.

“He told me that the mind is a powerful thing,” Nolan said. “When you are frustrated, you have to keep your spirit up because it will help your team. You need to help your team in anyway you can, don’t let your frustration be contagious to the rest of the guys.”

This helped make the end of the season so special for Stevens as he worked to get his game speed up to snuff. One of his most memorable moments came in the final game of the season, a 3-2 shootout win at Cedar Rapids on April 13.

“The last game at Cedar Rapids was awesome,” he said. “It was sold out and we beat them in a shootout. That was great for us as a team and it was a big step forward as a team to win the last game.”