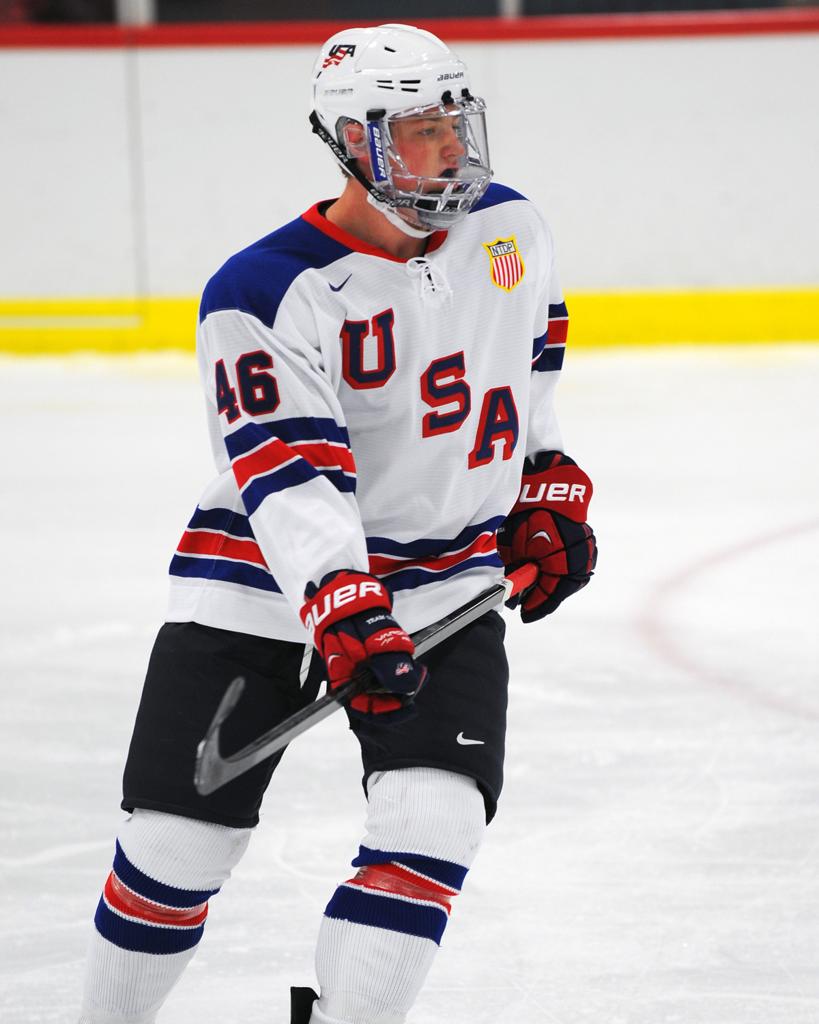 Eichel was awed by his experiences in Russia at the 2013 IIHF Men's World U18 Championship. Photo by Tom Sorensen.

When he was 3 years old, Jack Eichel received one of his most cherished presents — a yellow plastic hockey stick and ball. That gift jump-started his hockey career.

“My mom gave me a little yellow plastic hockey stick, and I would run around the house and play,” Eichel recalled. “I had little mini hockey nets, and I would bring the nets everywhere with me. I was always asking family, friends, uncles, aunts, grandmothers and grandfathers to play with me. I always liked the game and got into it when I was young.” 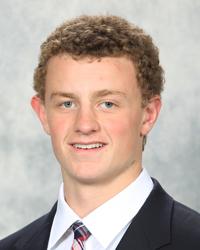 Eichel looks to take his experience playing up with the U18s into next season. Photo by Dave Reginek.

That enthusiasm led to a promising youth career and eventually an invitation to join USA Hockey's National Team Development Program in Ann Arbor, where Eichel just finished up his first season.

“They give you so many resources and tools to be successful,” said Eichel, a 6-foot-1, 190-pound forward from North Chelmsford, Mass. “They tell you to take responsibility for your own development. I think that is a big thing the program does for you. They are going to give you all the tools, and it depends if you are going to take them and use them.”

That transition is never easy, but Eichel understood there would be an adjustment period.

“It was tough. Our whole team went through an adjustment period at the beginning of the year,” he said. “ You come to the program and you are thrown into the USHL. It’s tough. I give credit to the guys on the team, the coaches and the staff — we worked really hard. I’m sure we are still adjusting.

“The USHL is a great league; it’s tough to score goals, especially for someone who likes to score goals. You are not scoring as much as you are used to. You have to keep doing what you used to it.”

Eichel took some advice from his dad that really helped him throughout the season.

“My dad has really been on me about if it’s not working, than you are not working hard enough,” said Eichel, who also played soccer, baseball, lacrosse and basketball before fully committing to hockey. “He always threw that at me during the year when I was scoring. He told me to keep working and you will get your bounces and be happy. I kept working and it was a great season.”

The ups and downs of the season ended on a positive note for Eichel, as he had the opportunity to step up and play with the U.S. National Under-18 squad, including playing at the 2013 International Ice Hockey Federation Men's World Under-18 Championship in Sochi, Russia.

“It was a great experience, not just going to the worlds but being with them on a day-to-day basis,” he said. “They have that experience, and being around them every day, it was all about learning. I got to pick up some habits they have — their work ethic and the way they go about their business. There were so many great players and great kids, and I can take what I learned from them and bring it back to the U17 team. I think we can really use that.”

Eichel’s favorite memory from the World U18 Championship was the team’s 4-3 shootout win in the semifinals over Russia.

“Obviously, USA vs. Russia is a huge rivalry. The crowd was with them and the odds were stacked against us. We hadn’t beaten them in a while. We bounced back from a lot of adversity in that game. We went down with three minutes left in the game and some say we might have panicked but we really didn’t. We won in a shootout. It was probably one of the most memorable games I have ever played in to silence that crowd. After the game, we were all speechless in the locker room.”

That feeling is just one reason why wearing the USA sweater means so much to Eichel.

“Every day, you get the opportunity to put the USA logo on, it’s a huge privilege,” he said. “There are so many people that would love to be in our position and they don’t get the chance too. We are so lucky, especially when we are playing other countries. The pride goes up because they are wearing their country’s sweater and you are wearing yours. You want to represent your program well; you are not just representing the program, you are representing the entire country.”