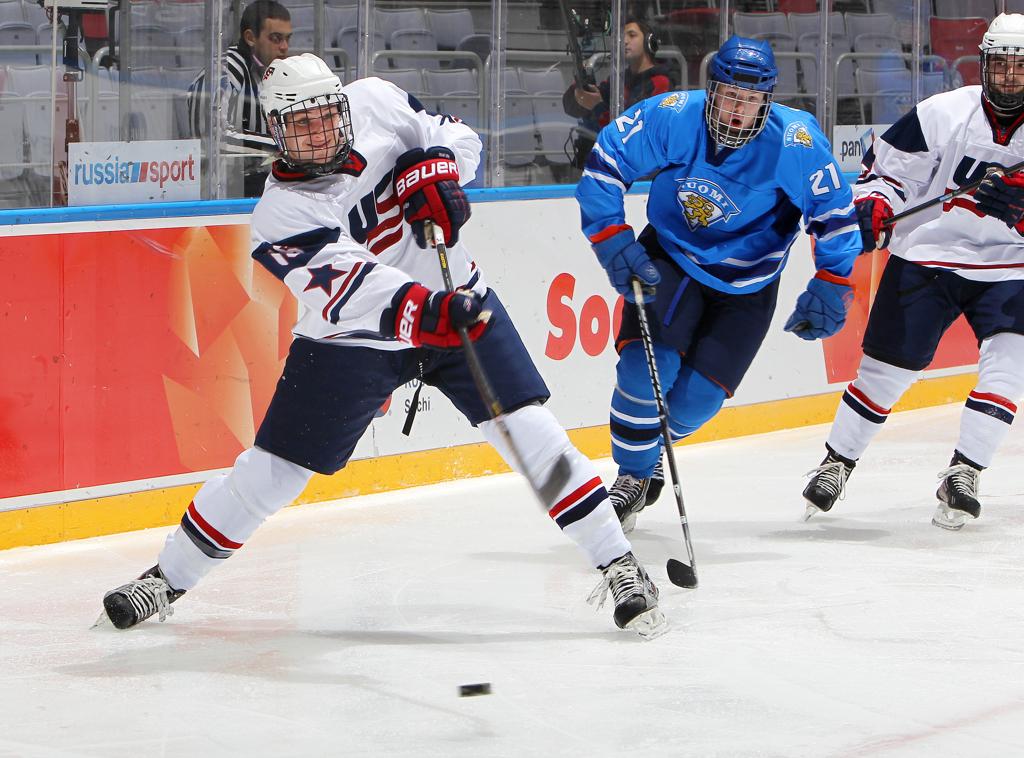 Santini was an impressive +8 for Team USA in seven games at the 2013 World Under-18 Championship in Russia. Photo courtesy of HHOF-IIHF Images.

Steven Santini’s defensive play at the 2013 International Ice Hockey Federation World Under-18 Championship earned him a special honor — the directorate award as the tournament's best defenseman.

“To win best defenseman at the tournament was a great honor,” said Santini, who just wrapped up his second and final season with the National Team Development Program. “I was definitely happy that I won it, but I didn’t train to win that award for two years. Our goal as a team was to win a gold medal, and we just fell short.” 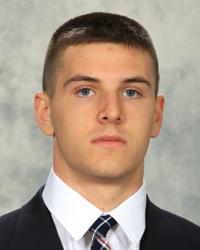 Santini will skate for Boston College next season. Photo by Dave Reginek.

Team USA claimed the silver medal, falling to Canada 4-3 in the championship game.

Santini, a 6-foot-1, 208-pounder from Mahopac, N.Y., has always been a defensive stalwart. He thrives on his ability to shut down the opponents’ top line, including at the World U18 Championship, where Santini and his teammates held opponents to just 22.7 shots per game.

“I play a responsible game and try to limit my mistakes,” he said. “I always work hard and do whatever it takes to help my team win. I may not be putting up points or scoring goals, but I always play against other team’s top lines. You have to work hard and compete against them. I have to be tough and stick up for myself and my teammates.”

Santini began his youth hockey career as a forward. But with his father Steve serving as Steven’s head coach, the younger Santini didn’t exactly have a choice one season when the team needed another defenseman.

“We didn’t have enough kids who wanted to play defense or who could skate backwards,” Steven recalled. “My dad was the coach of the team and he said, ‘Sorry, you are going to play defense.’ I fell in love with it, and it has taken me a long way.”

In his two years with the NTDP, Santini tallied two goals and 25 points in 121 games. He credits the program with helping him become a better player.

“The NTDP has helped me tremendously,” he said. “I came here as a tall, lanky guy. My skating has gotten much better, thanks to Carrie [Keil, the skating coach] and my attention to detail with Coach [Don] Granato. He has shown me a lot of details via video that helped me on the ice the last two years. We have watched plenty of video together.”

More than anything, that growth has translated into memories of representing his country.

“Playing in the U18 Worlds [is one of my best memories],” he said. “I also don’t think I’ll forget our U17 year, when we went to Russia and won the Four Nations in November. We beat Russia twice to win that championship.”

Santini said it has been special an honor to represent the United States.

“It’s such a great honor to represent the country. The tradition at the NTDP, it’s so hard to explain. So many good players and teams come through here. Each time I put the jersey and helmet on, I tried to make everyone proud who have come here before me.”

In the fall, Santini will slip on a different jersey, wearing the colors of Boston College.

“It was a good fit,” he said of picking BC. “When I was being recruited, I wanted to play on the East Coast and be closer to home. I loved everything about it: the rink, the campus, and the coaches. It was a good academic school and a perfect fit for me.”

Will there be a Hockey East rivalry between father, who was a forward at the University of Maine, and son?

“No,” Steven said laughing. “My dad supported my decision. However, my mom’s grandparents still live in Maine and they tease me about it.

“My grandpa, Leith Wadleigh, owns a restaurant five minutes from campus — called the Governors Restaurant — he was a little upset when I chose BC.  He will probably tease me about it until the day he dies that I didn’t go to Maine.”

If Santini continues to play his game, than that teasing might just have to end.