Even before Hudson Fasching began playing hockey at age 7, his two most noticeable traits — competitiveness and intensity — were evident.

“I would play a card game with my grandparents every time they came up from Tennessee to visit,” said Fasching, a forward on the U.S. National Under-18 Team. “It wasn’t Go Fish; rather it was a complicated card game. I finally figured it out. If I didn’t win that game, I would be crying and freaking out. We would have to keep playing until I won a game.

“People will say, ‘I’m competitive,’ and I’m like, ‘No, no you are not competitive.’ I’m intense and I hate to lose. I’ve grown up with it and my parents instilled that in me. I think that’s where it comes from.”

It should come as no surprise that Fasching is just as competitive on the ice, which is what he hopes people remember about him after he leaves Ann Arbor to play for the Minnesota Golden Gophers next season. 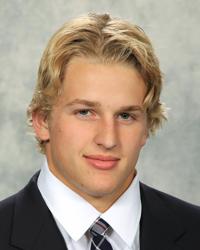 Fasching is outgrowing his nickname of "Big Baby". Photo by Dave Reginek.

“I want to be remembered as hard working, and I gave everything I had when I was here,” he said. “I didn’t slack off at all. I wanted to do my best and gave it my all when I was here. I don’t have any regrets.”

One of his favorite memories from this year was the Oct. 26, 2012, trip to the University of Minnesota, where Fasching and his teammates skated to a 2-2 overtime tie. Despite missing the third period due to an injury, it was a special moment for him.

“I had tons of friends and family there to support me,” said Fasching, who is from Burnsville, Minn. “I had so many tweets and texts of friends who came to check out the game. It was a really fun experience to play in the building I am going to play in next year. I didn’t realize how big the building was in general. It was really cool. There was a great turnout of fans and a great atmosphere. It was a lot of fun.

“I went on my official visit that Sunday [following the game]. The guy who hit me came over and gave me a hug and said sorry man. It was cool to meet the guys. It was a fun weekend.”

Fasching grew up rooting for the Golden Gophers. After all, it’s the dream of many Minnesota hockey players to someday play for the “U”.

“Growing up for me, it was watching a Gophers game,” he said. “I was 6, and a buddy of my dad’s had season tickets and we would go to the games. They were always out of town and we would get to go. It was so much fun growing up and watching them. It was Gopher games on Friday and on Saturday nights. The Gopher-Sioux rivalry, which I’m sad to say is over, was awesome to grow up in that environment and see.

“Coming out here [to Ann Arbor], to be able to come back home and go to the school I have been dreaming about, it’s really special.”

These days Fasching has grown into a 6-foot-2, 214-pound forward. He credits the National Team Development Program for helping him “develop” his body.

“My strength in general [is where I have grown the most],” he said. “I was kind of a scrawny kid coming in here. I was tall and skinny. I put on a lot of weight. I just recently realized I’ve gotten a lot stronger and bigger physically and matured in a lot of different ways. The program has definitely helped me in this area.”

Despite the added strength, his nickname “Big Baby” still sticks with him.

“It’s still tossed around. I’m starting to grow a little facial hair so it’s starting to fade down, but I still have it,” he said laughing. “Every once in a while, the guys like to throw it around.”

As Fasching and his U18 teammates gear up for the final event of the season, the International Ice Hockey Federation World Under-18 Championship in Sochi, Russia, Fasching said he is realizing just how special the last two years have been, especially when it came to wearing the colors of Team USA.

“It’s really weird. I’ll be sitting in the locker room and I’m used to putting the jersey on and it’s like wow. It’s really cool that I’ve been able to wear it,” he said. “Time is running short, and then I won’t get too wear it too much longer.

“Hopefully, I’ll be able to wear it at World Juniors down the road and maybe even the Olympics. Being able to represent your country and going overseas, you understand how much it means to wear it and represent the country.”