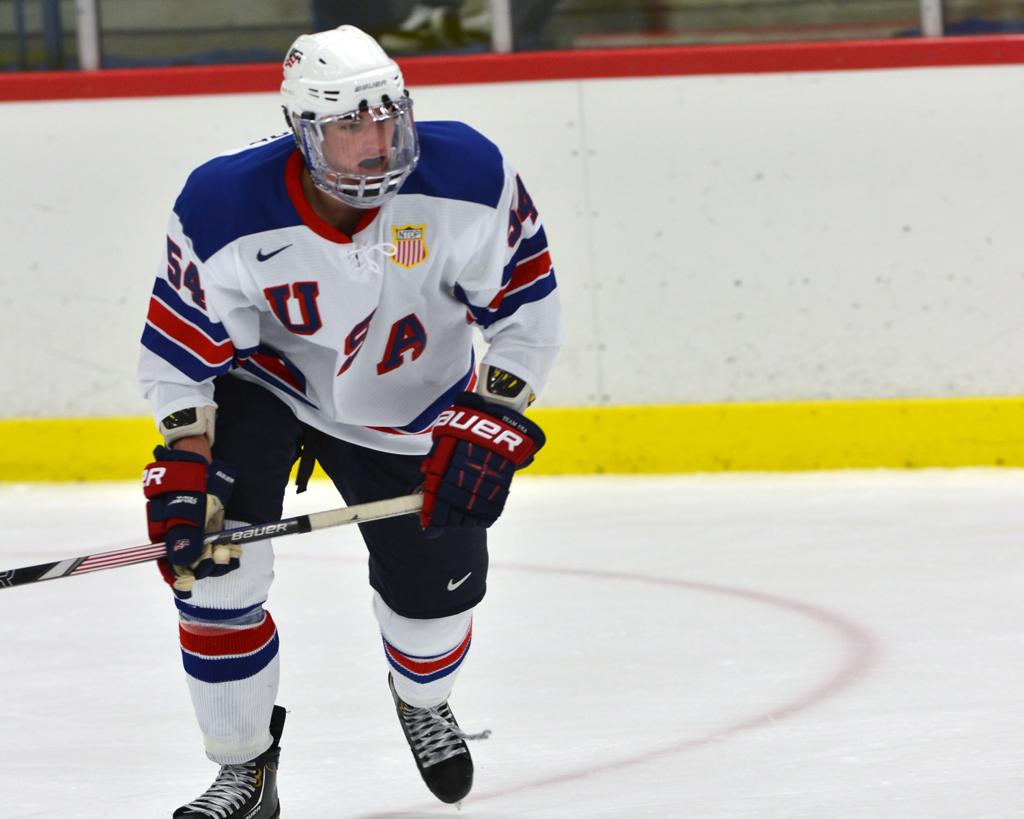 MacLeod's ultimate goal is to play for Boston University and hopefully move on to the NHL someday. Photo by Tom Sorensen.

The rivalry was quite intense in the MacLeod household between Johnathan and his older brother Chris. Whether it was pretending to be Boston College vs. Boston University in street hockey or playing games in the living room, the goal was always the same for the younger brother: to be better than Chris.

“I always looked up to him and wanted to be better than he was,” said Johnathan, who is four years younger than Chris and a huge BU fan. “We would play games in the living room and always battle.

“Even when we were younger, we were BC vs. BU. We would watch the Beanpot and wear each [respective team’s] jersey. It was pretty intense.”

The garage windows were not safe from the MacLeod brothers when they started playing hockey in the driveway. 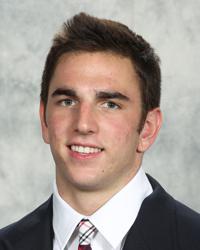 “We were breaking garage windows,” said Johnathan, now a defenseman on the U.S. National Under-17 Team. “We had to get new garage doors with no windows so we wouldn’t break them. We probably broke at least eight or nine prior to that.”

All joking aside, it was Chris who had the biggest influence on Johnathan when it came to hockey.

“My whole family played — my dad, my uncles and my brother. My brother was a big influence,” said Johnathan, who started skating when he was 3. “My goal was always to be better than him. Once he slowed down and I started to get ahead of him, he was starting to get mad.

“He played in high school, but he really didn’t want to pursue it in college so he stopped. He’s a sophomore at St. Lawrence now.”

Meanwhile, MacLeod has grown into a 6-foot-1, 178-pound defenseman, still patrolling the blue line — his “home” position since he was 7 years old.

“I started at forward, and it was different,” he said. “My coach asked me to go on D one game and he kept me there. I started to like it better. I was able to get up in the play but still protect the goalie. It was kind of the best of both worlds.”

The Dracut, Mass., native was very excited to join the National Team Development Program and continue to pursue his hockey goal.

“I really didn’t know what to say,” he said of getting the call to join the team. “I was at school and walking in between classes. I really didn’t know what to think, but my parents were really excited. I was so excited to be known as one of the top kids for my age group. That was really exciting. I kind of knew I wanted to take it and I just did.

“[The NTDP’s] history and how they get guys to where they want to be, which is college and then, pro. They develop kids, which is ultimately what you want. That was important to me and my parents.”

“It’s a real honor,” he said. “To be able to put the logo on every day, whether it’s a t-shirt at school, the dress sweats or the jersey. You know in the back of your head, you are representing your country and you need to make smart decisions and play your hardest every day.”

Plus, MacLeod has built a special relationship with assistant coach John Gruden. Gruden, a former pro player and All-American defenseman at Ferris State, has spent plenty of time mentoring MacLeod so he can reach his ultimate dream — college hockey at Boston University and then a pro career.

“We have developed a great personal relationship with each other, not just hockey but outside of hockey; we can talk stuff,” MacLeod said. “Having that relationship is really good. We can speak to each other on a personal level, whether it is on the ice or off. He explains a drill to me and I have upmost respect for him since he is my coach. When he tells me to do something, I make sure to do it.”

And for MacLeod, that intensity he displays on the ice still hasn’t changed.