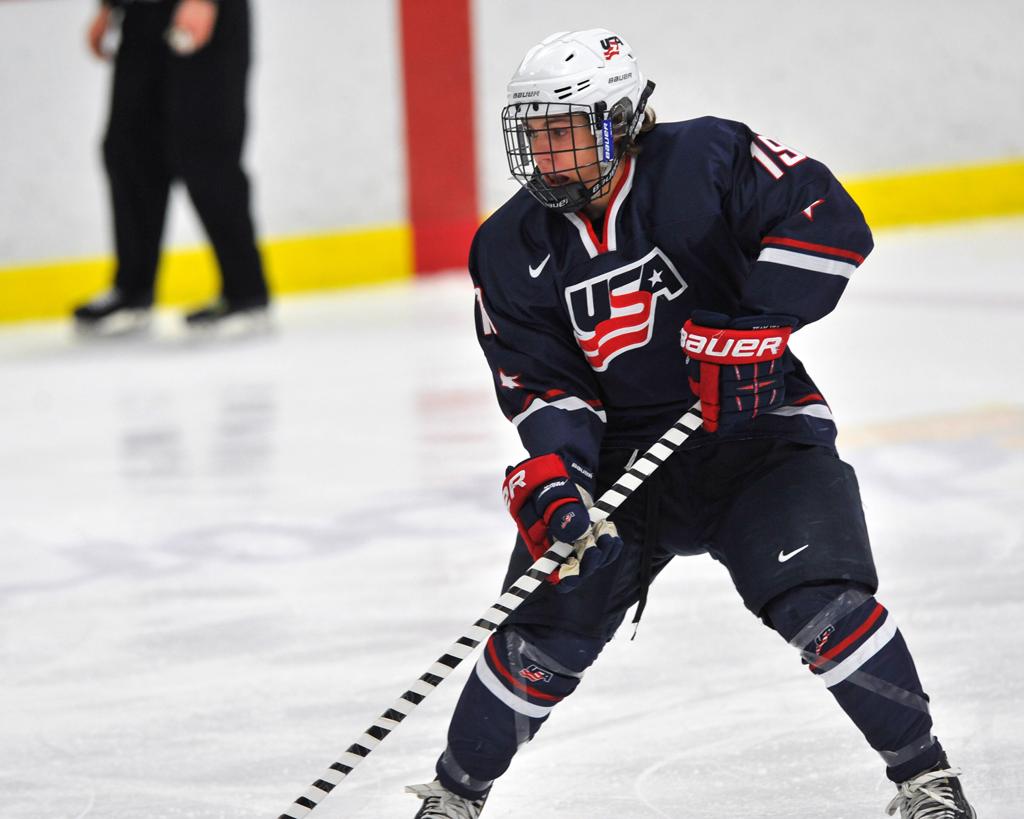 Kelleher is looking to pull off a rare feat: lead his team in points in both U17 and U18 seasons. Photo by Tom Sorensen.

Some important words of advice will be passed from older brother to younger brother this week, when Charlie Kelleher takes part in the 2013 U.S. National Team Development Program Evaluation Camp.

“I will definitely give him words of advice before he gets here,” said older brother Tyler Kelleher, a 5-foot-6, 154-pound forward who leads the U.S. National Under-18 Team with 24 goals and 48 points. “I was really pumped when he told me that he was going to tryout camp.

“He came out here last year by himself to visit for about a week. He got to see everything, so it was pretty cool. He came to watch our practices and was able to take everything in. His goal is to definitely be here.” 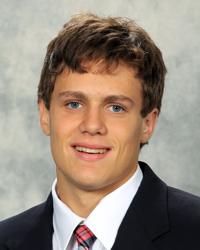 Kelleher enjoyed playing in front of family at UNH earlier this season. Photo by Dave Reginek.

One thing both Charlie and Tyler share are supportive parents.

“They taught me to never give up,” Tyler said. “I have always been a smaller player and, obviously, some people think it could be a disadvantage, but I don’t think it is a disadvantage. My dad always told me to not listen to them and never give up. I have used that as motivation.”

After all, the Longmeadow, Mass. native paced the U17s in scoring with 25 goals and 48 points last year and is again the top scorer this year.

“I never thought coming in I would be able to do that,” he said. “It didn’t really cross my mind. I have had a lot of help from my teammates. It would be cool to do that two years in a row [lead the team in scoring], but my main goal is to win the U18 World Championship right now.”

Kelleher knows he has some big skates to fill in order to reach that goal. He watched last year’s group capture the gold medal, and those players have been an inspiration to him.

“It would be unbelievable,” he said on winning the gold. “The 18s last year put their heart and soul into it to win it. It gave me confidence to see they could win it through all the hard work they put into it last year. I saw them. To be able to copy what they did and put all the hard work into it would be special. We have been dreaming about it for two years. It would be unreal.”

Kelleher said he has taken advantage of the coaching staff to help his game grow so he can reach that final dream.

“Coach Granato and Coach Fohr have helped me so much here, even on things I never thought I could learn,” he said. “I have learned how to use teammates better and learned how to make the game more simple and make simple plays. It helps out a lot. The coaches are always trying to get us better. On international trips, they will pull us in to their hotel rooms and we will watch an NHL clip, if they think it will make us better.”

One of the highlights of this season for Kelleher was a 2-2 tie against his future college squad at the University of New Hampshire on Dec. 9. Manchester is just a short two hours from his home, so his family and friends were able to watch him play.

“My family was there, almost 30 people were there,” he said. “They didn’t get to see me play last year since we didn’t play near there at all. This was the only chance that I got to play in front of my family and friends. It was really cool.

“The hockey atmosphere is unbelievable. I love the campus and coaching staff. I kept looking over at the [home] bench and thinking how I am going to be here next year. When we came out, the student section had a sign that said, ‘Welcome to UNH Kelleher.’ That was really cool. I just can’t wait; it was cool to be welcomed like that.”

For now, Kelleher is slowly counting down the days that he can still pull his USA jersey over his head as he prepares for the final chapter.

“It’s starting to come to an end so every day I’m thinking about it,” he said. “I can’t imagine what it will be like not to suit up next to my brothers every day. I’m trying to make the most of it every day.

“We go to school together. We hang out after practice. I’m with them 24/7. They are really my brothers at this point.”

If things go right this week, however, a different one of Kelleher’s brothers will be in Ann Arbor next year.