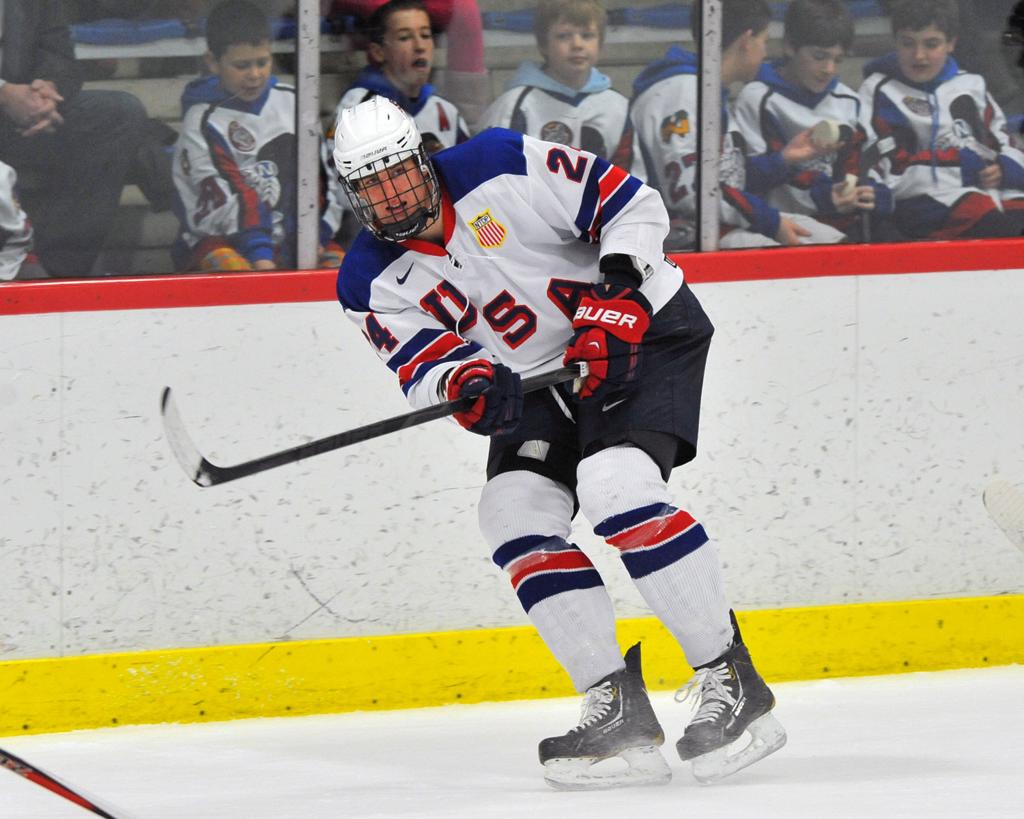 McCarron lost the first battle against brother, John, but is anticipating a potential rematch in the future. Photo by Tom Sorensen.

Bragging rights were on the line when the McCarron brothers appeared on opposite sides of the ice on Oct. 19, 2012.

Older brother John suits up for Cornell University. Younger brother Michael is a forward for the U.S. National Under-18 Team.

Like many bouts with an older brother, though, this one went the way of the elder. 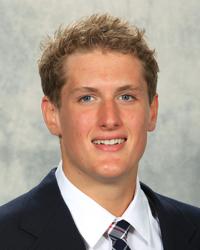 McCarron was impressed by his visit to Western Michigan University. Photo by Dave Reginek.

“I chirped a couple guys on their team. One guy ducked on me when I went to go hit him and I got mad. The student section actually started chanting ‘baby brother,’ and that was kind of funny.”

The younger McCarron expects to endure some ribbing from John.

“I’m sure he will give it to me this summer,” Michael said. “I haven’t hung out with him too much this year with our hockey schedules. He hasn’t chirped me too hard yet, but he will be home this summer.”

The McCarron parents, Dave and Nancy, did their best to stay neutral.

“I think my mom had a Cornell jacket on and USA T-shirt underneath, the same as my dad,” Michael said. “I think they just cheered for whoever scored.  Hopefully, they had a lot of fun.”

The 6-foot-5, 227-pound forward has seen his game grow in his second season with the National Team Development Program. He has 11 goals and 27 points through 44 games this season after posting six goals and 27 points in 53 games as a member of the U.S. National Under-17 Team in 2011-12.

“I’m more mature and have more experience,” McCarron said. “It’s my second year in the USHL and I feel as I have that extra second. As of last year, I didn’t have that extra second. I feel I know where everyone is and I have been playing with the same line [Allen and Tyler Kelleher] for a while now. I know where they are going to be on the ice and I’m the ‘big’ guy out there making room for them.”

McCarron, a native of Macomb, Mich., is all about the physical aspects of the game, which of course, may involve a little chirping. That might explain why he leads the team in penalty minutes with 146.

“I’m the only big guy on the line so I try to create room for them,” he said. “Play physical and get pucks to them and get open for them. I like to chirp a lot; it’s part of my game.”

“It refers to hockey,” he said. “That’s my ultimate goal to make it my profession. It’s one goal I want to reach.”

This is part of why wearing the USA sweater means so much to McCarron.

“You can’t put into words,” he said. “It’s weird since this is the last year, and the last couple times I’m going to be able to put on this jersey, maybe, unless you make the Olympics or World Juniors,” he said. “It’s kind of scary. I love the feeling of playing for my country.

“There are so many guys that could have made this team and they picked me for some reason. I fit into this team, and I feel so lucky to put on that jersey. I keep telling myself, ‘You need to work out now because they could have picked someone else.’”

McCarron has committed to attend Western Michigan University next year after his playing career with the NTDP is over. It’s just the next step in reaching his career goal.

“I went up there; the coaches wanted me to go on a visit. I wasn’t even planning on committing there,” McCarron said. “The coaches really made me feel at home, and that was the biggest reason why I went there. They are professional about everything they do and the campus is pretty nice. It’s close to my house. They asked me at the end of the day, ‘Do you want to do this?’ And I wasn’t even put on the spot because I knew after that day, I knew I wanted to commit there and I was so happy to get it over with. I got into the school so I was happy about it.”

The big question is what will happen if there is a rematch against Cornell?

“I don’t know if we play Cornell next year or not, but I would love to play my brother again,” McCarron said. “I think my parents will have to cheer for both teams and whoever is playing that night.”