Player Feature - Hamilton Scored a Keepsake for His Sister 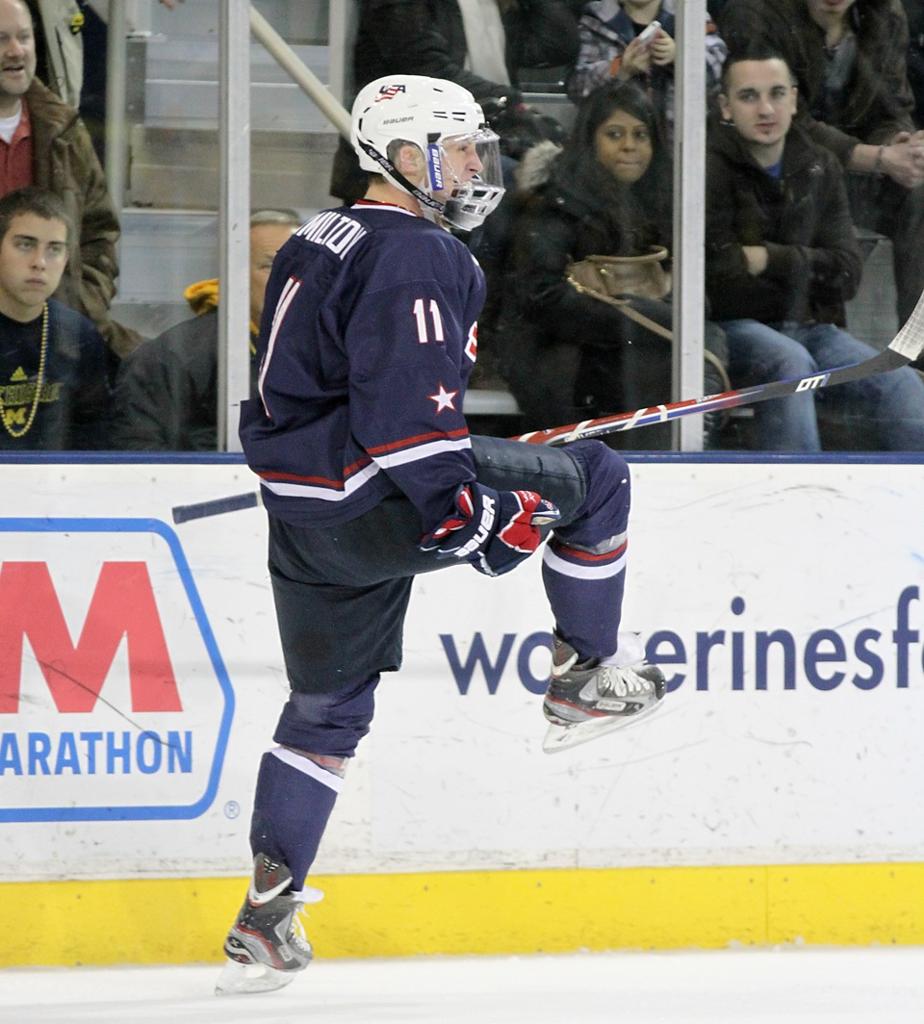 Trevor Hamilton celebrates after scoring against the University of Michigan on Jan. 4, 2013. Photo by Jonathan Knight.

Eight-year-old Morgan Hamilton had a simple request for older brother Trevor Hamilton before the U.S. National Under-18 Team defenseman suited up for Team USA’s game against the University of Michigan earlier this season.

“She told me before the game, ‘If you score, then I get the puck,’” said Hamilton, who indeed scored. “I gave the puck to my sister, and she was excited to get the puck.”

For Hamilton, a native Grosse Pointe Farms, Mich., playing the Wolverines on Jan. 4, was a special treat. And beating Michigan 5-3 — the first time a National Team Development Program squad has beat its Ann Arbor neighbor — made it even sweeter. 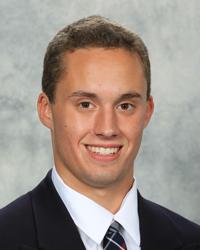 Hamilton notices improvement on his skating ability since joining the NTDP. Photo by Dave Reginek.

The 6-foot, 185-pound defenseman has been known as a defensive defenseman, so it should be no surprise that his defensive game has grown even stronger since joining the NTDP.

“I feel that my skating has improved greatly, getting up and down the ice and getting back for pucks,” he said. “I’m much quicker and faster now. We are playing colleges — they are bigger, stronger and faster. I’m more physical and getting shots through. I feel I’ve become a better player since coming to the program last year.”

When asked what workout has helped his game the most, Hamilton had a quick answer.

“The power skating last year and this summer,” he said. “I really struggled with my skating. I was with the lower levels of skating. I feel my legs have gotten stronger and I’m getting quicker and faster.

“If you want to make something out of hockey, you come here. They push you and push you. It is a non-stop grind, but it’s been great for me so far. It has been a great experience. They know how to train you and push you.”

Hamilton is familiar with being pushed. After all, his dad Michael served as his youth coach growing up.

“My dad pushed me, and I could never say no to him,” Hamilton said. “He was harder on me, but I feel as if it has paid off. He has gotten me to places that I have never imagined. He’s taught me so much about the game and he knows so much about the game. He took one year off from coaching and it was different not to have him back there [when I was young] so he came back the next two years and coached me again.”

That extra “push” has propelled Hamilton into a busy season. It began in September, when he participated in the CCM/USA Hockey All-American Prospects Game.

“It was very special,” he said. “It was different playing some [NTDP teammates] since I was on a team with not as many of our players. It was cool to see, but you also knew what they were going to do since you have played with them for the past year. My parents made the trip and all the fans that came out. It was a great event.”

Then in November he inked a National Letter of Intent to play for the Miami RedHawks next season. The Oxford, Ohio, campus immediately felt like “home” to Hamilton.

“They asked for my whole family to come down so they could meet the family,” he said. “Right when I got there, it struck me how beautiful the campus is, and when I walked in the rink, it’s beautiful. When they took me downstairs, I was in awe. It’s an NHL locker room. I’m very excited to go there. The coaches treat me well and check in to see how I am doing. I feel it is the right fit for me.”

For now, though, Hamilton feels right at home with the NTDP in Ann Arbor.

“It never gets old putting my jersey on,” he said. “Every time I come into the locker room and see the jerseys hanging in the stalls; I get the chills sometimes. It doesn’t matter if we playing Russia or Sweden, or Canada — it’s a great feeling.”

Ask him about his favorite memory and he says it’s easy it was the squad’s first trip to Russia for the Four Nations in November 2011.

“It was our first trip as a team overseas,” he said. “It was a great experience. I had been to Russia before, but I had never been to that part. It was interesting seeing how they deal with everything that goes on over there. It’s pretty exciting to stand on the blue line and sing the national anthem.”