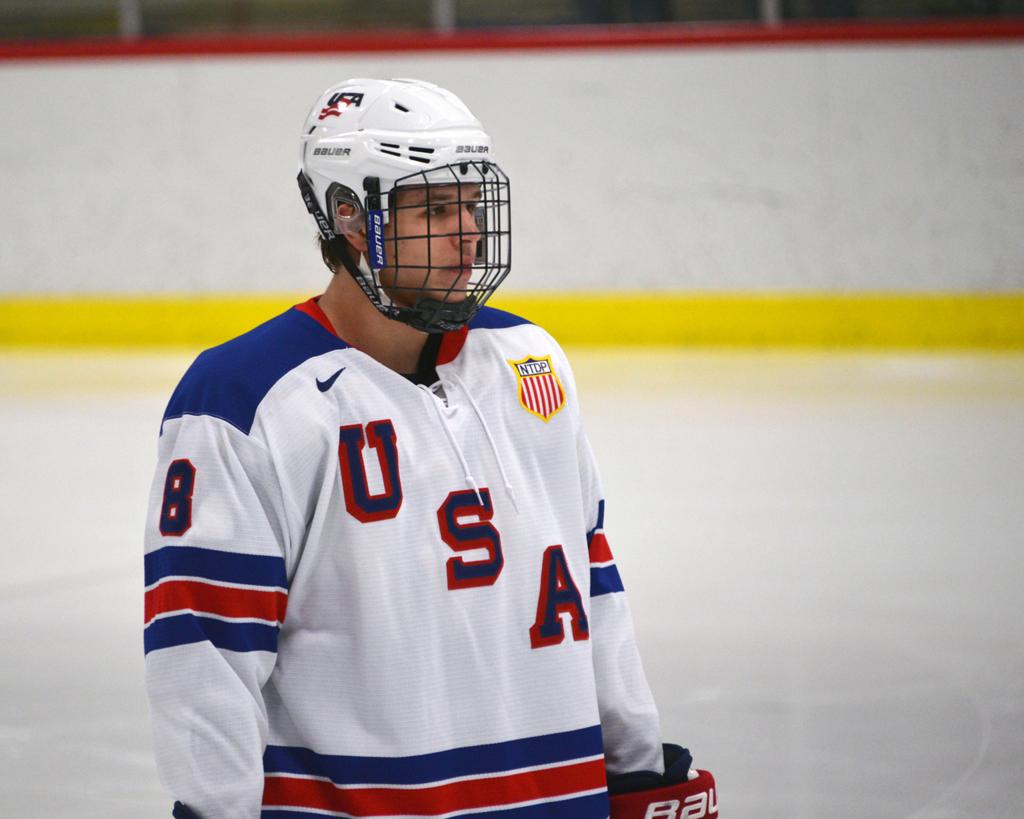 Dawson Cook treats each tournament as a test for the ultimate goal: the World U18 Championship in Russia. Photo by Tom Sorensen.

This week’s trip to Sweden for the Five Nations Tournament will mark the third trip across the Atlantic Ocean for U.S. National Under-18 Team forward Dawson Cook and his teammates.

In the big picture, though, it’s just another step on the way to the ultimate prize: the International Ice Hockey Federation World Men’s Under-18 Championship.

“With every tournament we go into, we want to win and get better and prepare for the U18 World Championship at the end of the year,” Cook said. “Coach says its practice games for the real tournament.”

With each trip across the pond, Cook has learned some valuable lessons that he can take with him, no matter the circumstances. 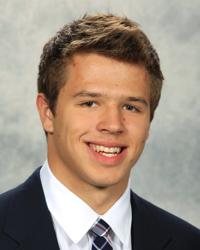 Cook points to the first international tournament win in Russia as most memorable. Photo by Dave Reginek.

“You learn what you have for sure,” he said. “When you go over there, it’s different. For instance, Russia was different [in November 2011]. It’s hard to get used to at first, but now when you go, you know what to expect and can prepare before you go. Playing on a different soil is amazing.”

Plus, he says nothing compares to wearing the USA sweater, especially in international competition.

“It’s hard to explain [what it’s like to put on the sweater],” Cook said. “It’s something to represent your country, and I have pride in my country. I take it to heart.”

The 6-1, 197-pound forward played in all 55 games with the U17s last season, posting two goals and 12 points. Despite missing eight games this season with an injury, Cook has posted three goals and eights points in 32 contests. He realizes how much that one-year difference can make.

“This year, you come back and know what to expect school wise, billet families and workout wise,” he said. “I think I have more confidence in the game and that’s the biggest difference. When you work out all summer, you definitely train and are more prepared to come back.

“Last year, coming in, you don’t realize how you will come together, but going to school and after the Kirk [Culik workout] sessions, you come together to support each other. When you go home over the summer, you are like, ‘Wow, I miss them so much.’ And every day I can’t wait to get back for the guys. At the end of the year, it’s going to be tough.”

In the meantime, Cook has a few goals he hopes to accomplish before leaving Ann Arbor and joining the Notre Dame hockey team. And it should not come to any surprise that the final goal is winning the U18 World Championship, which takes place April 7-22 in Sochi, Russia.

Cook and his teammates are determined to extend Team USA’s winning streak to five consecutive championships.

“Be sure to keep the streak going and prove to everyone we can still do it,” Cook said of his goals. “There is pressure on us — with the tournament in Russia, and Russia is the team to beat. I think we will be ready for it.

“The first time we were in Russia, it was a shell-shock. It’s so different. You couldn’t eat the food because it was washed in the water. The water was orange. You just didn’t know what to expect. Now we are going to a nicer area. We will know what to do and are more acclimated to it.”

Nothing would be more special for Cook than closing out his National Team Development Program standing on the blue line with his teammates, singing the American national anthem. After all, Cook counts his experience doing just that the last time he was in Russia as his favorite moment so far with the NTDP.

“If I had to count it down to one, probably the first trip to Russia when we won and were standing at the blueline, singing together,” he said on his best memory. “It was special and something I will remember for a long time.”

And that’s how much international play means to Cook.