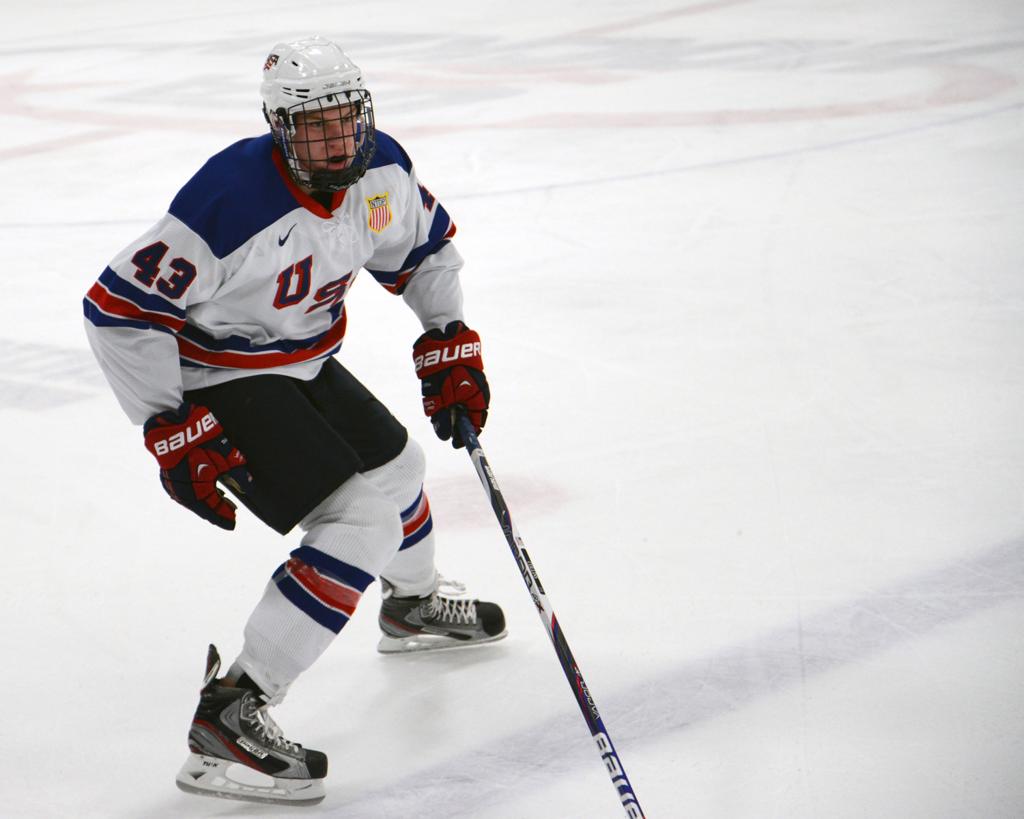 For some players, hockey just runs in the family. That couldn’t be truer for U.S. National Under-17 Team defenseman Ryan Collins.

Collins, of Bloomington, Minn., fell in love with the sport from the get go thanks to his father Dan, a former player for Connecticut College.

“My dad always played hockey,” said Collins, who began playing organized hockey when he was 6. “He put me into it right away, skating on the frozen lakes in Minnesota. He got me going, and I loved it from there.

“He had a lot of influence [in playing hockey] and he still does. He’s been there for me throughout all of it, giving me tips and keeping me going when I was down.”

Dan Collins served as his son’s coach through Squirts. Ryan Collins remembers a few things from his dad’s coaching, but more than anything, he looks back at the life lessons his father taught him. 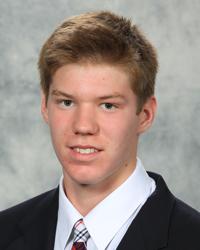 Collins was featured on the blue line at Benilde-St. Margaret's prior to his time at the NTDP. Photo by Dave Reginek.

“I don’t remember it too much because I was young, but he was intense,” Ryan recalled. “He was really hard on me in a good way.

“There are a lot of lessons he taught me. I would say work ethic, how to carry myself as a person and an athlete, and the fundamentals.”

Collins’ dad was a forward, but defense seemed to come naturally for the youngster.

“I saw video of me in Mites and I was a really defensive player,” Ryan Collins said. “From the start, I always wanted to play D, and I was in position to do that, so they just put me on defense. I stuck with it.”

Just one year removed from helping his Benilde-St. Margaret’s team capture the 2012 Minnesota Class AA high school championship, Collins has noticed some differences between the Minnesota juggernaut and the National Team Development Program.

“The professionalism of the [NTDP], they way they go about preparing for things. They prepare a lot more seriously than in high school,” Collins said of the differences. “It’s a lot different, strength and speed-wise. Fundamental-wise, we see teams playing more systems and you have to make the adjustment since teams are stronger and faster. We are still working on it, but we have come a long way since the beginning of the season.”

The 6-foot-4, 203-pound blueliner has appeared in 38 games this season, posting two goals and five points. One key in Collins’ transition has been working with NTDP assistant coach John Gruden, a former All-American and professional defenseman who provides all kinds of advice for Collins.

“It has been great,” Collins said of working with Gruden. “He is always there for us, especially any specific things. He is always giving us tips, or we can go to him and ask him questions about our game that we want to work on or watch film on. It’s a lot more personalized with him.”

One of Collins’ favorite experiences this season was the World Under-17 Challenge in Quebec. The U.S. placed third, beating Team Quebec 4-3 on Jan. 24, to close out the tournament.

“It was an amazing experience,” Collins said of the tournament. “It was great to see all the talent around the world. There are so many talented players in one place at the tournament. That was fun. It really brought our team together, being able to play seven games in eight days. It is constant hockey and it’s great to beat Canada, five times. It doesn’t get old.”

As Collins and his teammates gear up for their final international tournament of the season, the Five Nations Tournament in Finland, which runs Feb. 6-10, he said they have a few more goals to achieve still this season.

“We want to come back in the Five Nations and beat Russia and win that tournament,” he said. “We want to show that we can beat Sweden, who won the U17 Challenge, and take back Russia. We beat them the first time [in November], but then they won the second time [at the U17 Challenge]. We want to finish off the year with a win over them.

“We want to make a push in the USHL, trying to win games regularly and make the playoffs.”

As with any hockey player, nothing means more to Collins than wearing the jersey, especially when it’s the colors of his country.

“It’s special,” he said. “Its something that I always dreamed of, just hearing about the program for the first time, I wanted to play on it. I finally was able to get here and to wear that jersey, especially in international play, no matter how many times you do it — it never gets old.”