Player Feature - Victory Over Michigan Meant Much More for Allen 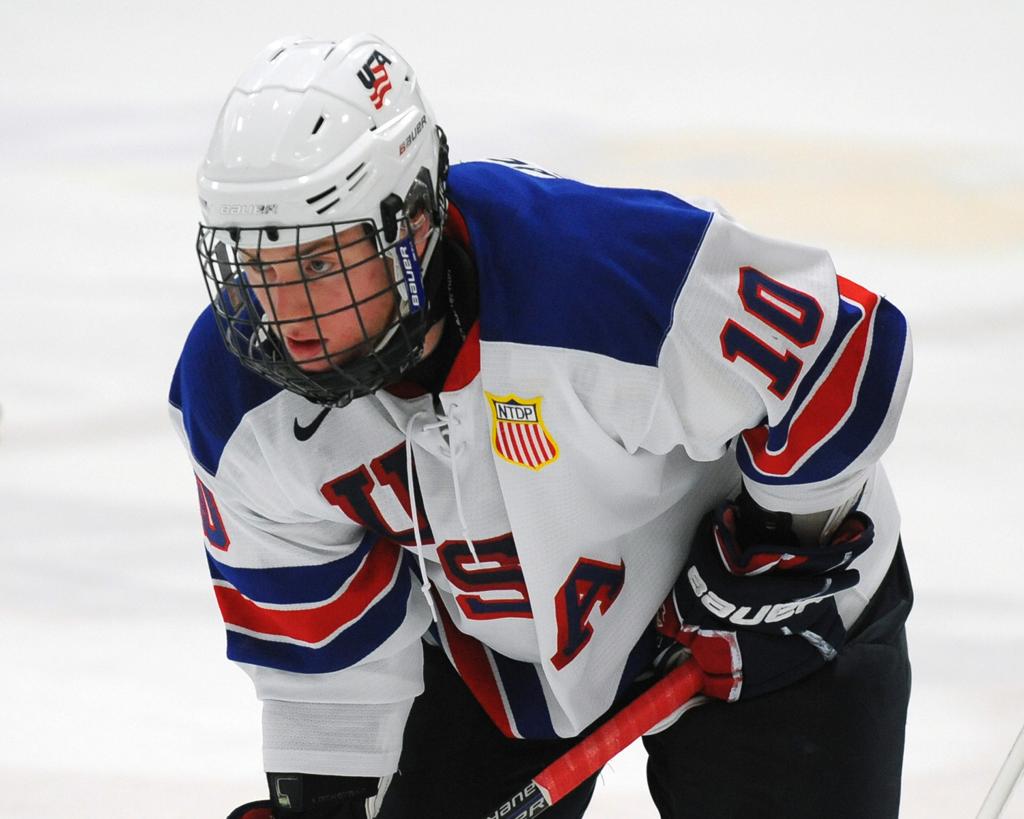 Evan Allen is one of three players committed to playing for the Michigan Wolverines. Photo by Tom Sorensen.

Ask U.S. National Under-18 Team forward Evan Allen about his memories from the Jan. 4 game at Michigan — a 5-3 win for the red, white and blue — and a big smile spreads across his face.

With the win, Team USA recorded its first-ever victory in 12 attempts against the Wolverines.

It was a little sweeter for Allen, too. After all, the 5-foot-10, 195-pounder plans to wear Michigan’s maize and blue sweater next fall after his playing days at the National Team Development Program are over. 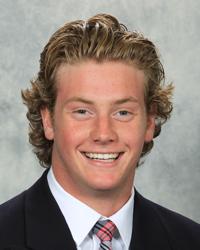 “That was amazing,” Allen said of the victory. “Going into it, I knew it would be a sweet game with the crowd, even without the students [who were on break]. The game was packed and playing against the guys and [coach] Red Berenson was the best. I had a meeting with Coach the week before and we discussed my role for next year. It was good to play against him and show him what I can do.

“Playing in Yost made me look around and say, ‘Wow, I’ll be playing here for the next four years.’ It was loud [especially when we scored]. It was cool. Being on the ice for a few goals was awesome.”

The Sterling Heights, Mich., native actually had his own “little” cheering section at Yost Ice Arena. And with the game on local television, other friends and family members were able to watch as well.

Allen, who picked up an assist on the squad’s fifth goal, also got a little chippy with some of his future teammates during the game.

“Since its hockey, there was some stuff said,” he said. “After the game, a few of the old guys such as [A.J.] Treais said to us good luck at Worlds. That was really nice of them.”

The other big event in Allen’s season this year was the 2012 CCM/USA Hockey All-American Prospects game on Sept. 29, in Buffalo, N.Y. Allen scored a pair of goals for Team Housley, whose squad fell 5-2 to Team McClanahan.

“It was awesome,” Allen said on playing in the game. “Knowing the NHL scouts and teams were there. [NTDP U-18] Coach [Don] Granato told us about it and told us to bring it up another level. That game was high intensity; it was like playing one of the better college teams. It was the best players out there playing in an NHL rink. Plus, getting two goals was great.”

One other item stood out to Allen, and that was coach Phil Housley.

“He was really cool. He was out there laughing and teaching us individually,” Allen said of the U.S. Olympian turned coach. “Coach Housley told us in the locker room not to take days off and to keep working hard, work harder than the guy next to you and be a good teammate to everyone. It goes a long way.”

Allen understands the importance of hard work. After all, he set a goal when he was 11 years old to play for the NTDP.

“When I was 11, I knew about it and thought it would be cool,” he said. “I never thought I would get the opportunity but now, being here, it’s amazing. I wouldn’t change it for the world. I love it.”

After putting up 36 points (17 goals, 19 assists) in 52 games one year ago, Allen has 13 goals and 25 points heading into this week’s action. There are two things that he credits for feeling more comfortable on the ice this season — familiarity and the workouts.

“Our teamwork, since coach Granato has the lines pretty well set, and knowing that we are a year into the workouts and practices,” he said. “I feel as if coach has gained confidence in us, so that helps too.

“I feel stronger and faster on the ice. The workouts including Kirk [Culik] with the cross training; it was worth it. With Darryl [Nelson, strength & conditioning], he helps out. On the ice, it’s the repetition every day. We are definitely improving.”

Which takes Allen to final few months of his NTDP career. He has some specific goals before he leaves Ann Arbor and the program.

“The international tournaments are the most important to us — the Five Nations in Sweden [in February] and the U18 World Championships at the end in April, that is No. 1,” he said. “Playing as a team, every single game. In the USHL, we have been playing all right, but we want to dominate and come together more as a team, both on and off the ice and finish it out strong.”