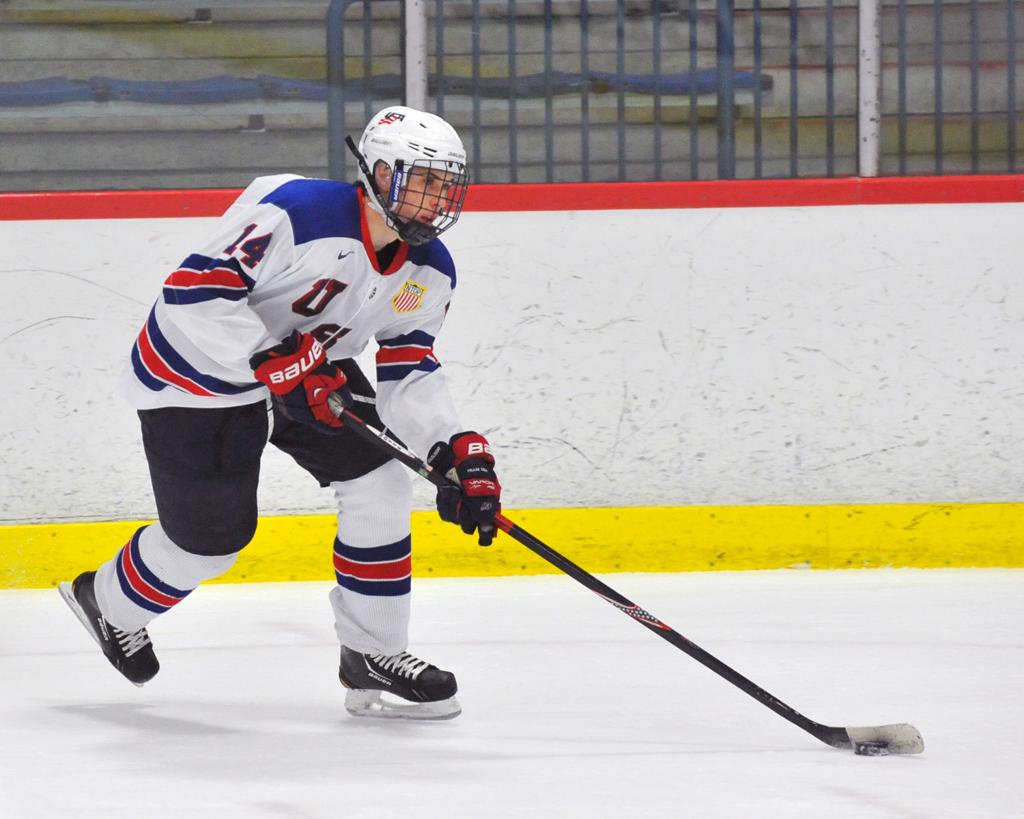 There might have been some nerves as Tyler Motte stepped onto the ice at Yost Ice Arena with his U.S. National Under-18 teammates Friday. But they hardly showed as Motte helped his current team beat his future team, the Michigan Wolverines, 5-3. It was the first time the National Team Development Program has won at the University of Michigan.

“There were some chills going on for sure,” Motte said of playing at Yost. “It was a big crowd even with the students gone, but the band was good and got the crowd going. There is definitely a lot to look forward to next year. 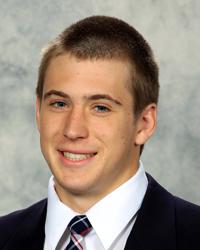 Motte draws his hockey inspiration from his brother, CJ. Photo by Dave Reginek.

That is exactly what Motte did. He registered a pair of goals against the Wolverines, including a first-period tally to even the score at two before giving the U18s a 3-2 lead just 45 seconds into the third period.

“It felt great, especially to put our team up in the third period,” he said. “It was big for our team overall, but it also felt great to get some momentum going and get some confidence for myself. I think it helps our team out.”

The St. Clair, Mich., native has posted 12 goals and 22 points in 20 games this season. When asked about the biggest difference between last year and this year, Motte listed two things: size and speed.

“Darryl [Nelson, the strength and conditioning coach] has a good program for us up in the weight room to help with speed and strength,” Motte said. “On the ice, it’s about confidence. We are playing some [NCAA] Division I teams, and it will help as we get ready to go into worlds [in April].”

When asked what his best memory so far this season, Motte answered without hesitation: the Four Nations Tournament in November at the Ann Arbor Ice Cube. And more specifically, Motte referenced the contest against Sweden. The game, a 5-3 victory by Team USA, helped Motte and his teammates capture the tournament title before a home crowd.

“The tournament here was great. The Sweden crowd was fabulous. I think we broke 1,000 fans, and it was nice to see the Cube packed for once and behind us. It was a great feeling,” he said.

The Motte family might have conflicted allegiances again sometime soon. After all, Tyler’s brother CJ is a sophomore goalie for Ferris State University.

“I’m sure my parents don’t like that too much, but it will be fun,” Tyler Motte said. “They will probably sit neutral, in between Michigan and Ferris State fans. I’m sure my dad will be crying but my mom will be into it.

“I got into hockey because of my brother. I wanted to be just like him. He has played a big leadership role and going ahead, I hope one day we will get to play each other. I love the kid to death. He has been gone since his junior year, my freshman year of high school, so it was a little tough, but it definitely has strengthened our relationship. We don’t get to talk as much but we send good-luck texts. When we get to talk, it means a lot more to us.”

As Tyler Motte and his teammates gear up for a double-header at Penn State University this weekend, the upcoming Five Nations Tournament in Sweden in February and the year-end tournament, the International Ice Hockey Federation World Under-18 Championship in Russia, a few things come to his mind.

“As a team, I think we need to take it one game at a time and hopefully win as many games as possible and see what happens,” he said. “We have the tournament in Sweden coming up in February. Obviously, we want to win and that’s a big step. No one can look past the Worlds. There is a big, big target on our chest since we are going for a five-peat.”

For now, Motte is just living in the moment and wearing the colors of his country.

“[It’s an] unbelievable feeling,” he said. “I still remember walking into the first day last year and seeing it. I took a picture of it and it will be something that I will remember forever.”