Tuch is Finding His Way Through Hockey 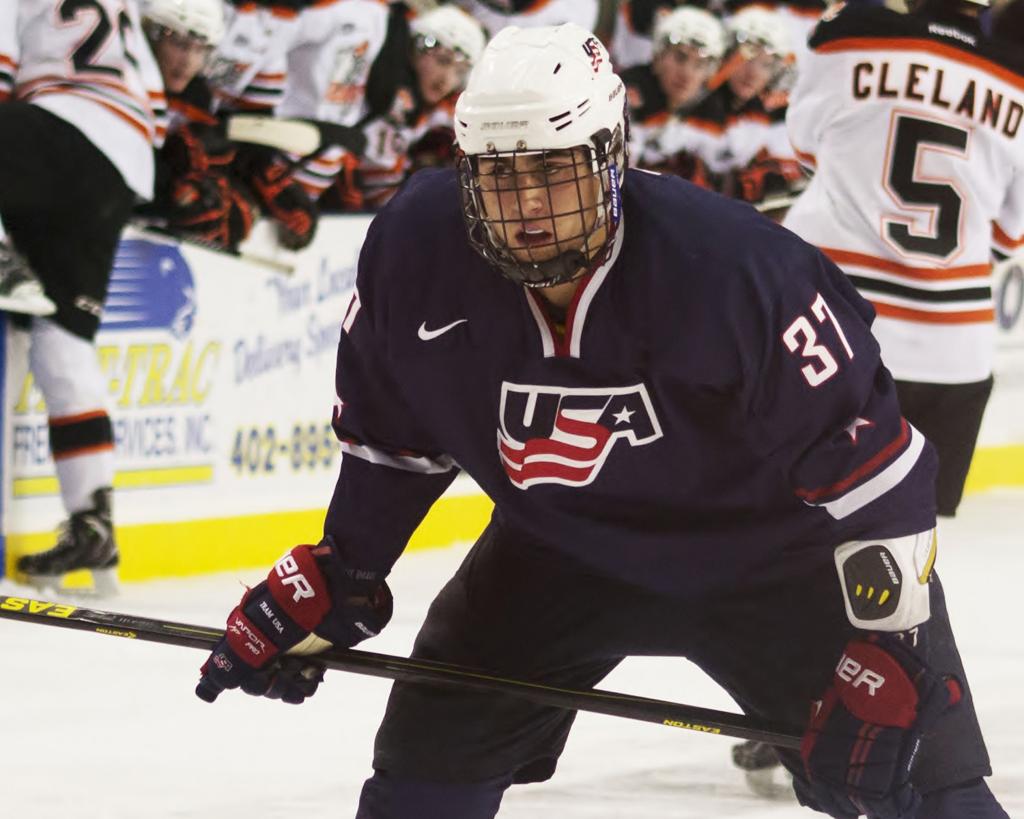 Tuch points to his time at the Four Nations Tournament in Switzerland as most memorable moment so far this season. Photo by Allan Gardner.

Alex Tuch didn’t have dreams of grandeur when he got involved with hockey.

“My family doesn’t really have a hockey background, but my dad thought it would be a good way to teach me life skills,” explained Tuch, now a forward on the U.S. National Under-17 Team who started playing when he was 3 years old. “My dad fell in love with the sport since he had some friends whose kids played hockey.

“Hockey has been my life since I was younger. There has been ups and downs, but it has motivated me in all aspects of life and school.”

Hockey also has done one other thing in the Tuch household, which includes his parents, Carl and Sharon, and 10-year-old twins, Luke and Leah.

“It brought my family together,” Alex Tuch said. “I have a little brother that plays as well. He looks up to me and wants to be like me.

“My family is really close-knit. We traveled everywhere together from orientation to coming out here and staying with me for a weekend. It was tough, but it has been fun.” 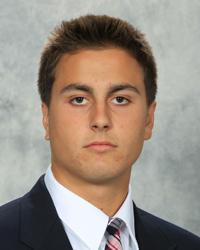 Tuch follows in the footsteps of other NTDP players from the Syracuse area. Photo by Dave Reginek.

Growing up in Baldwinsville, N.Y., Tuch never dreamed of having opportunities like those in Ann Arbor (Mich.) with the National Team Development Program. He just tried to stay focused and work on the task at hand.

“I didn’t think it was possible until a couple years ago,” he said. “I really focused on right then and there. I didn’t look too far ahead. When I was growing up, I heard a little bit about the NTDP. There were a couple kids from the Syracuse area that went through the program — the Morins [Chad, 2003-05; Jeremy, 2007-09) and D’Amigo [Jerry, 2007-09). It was a huge opportunity, and I decided to take it.

“I always watched the Olympics and the World Juniors. I have always been a fan. Putting on the jersey and representing your country and even your family, it’s a complete honor. It means the world.”

After playing for the Syracuse Stars Junior B team last year, the 6-3, 219-pound forward has made the adjustment of playing with new teammates and in the United States Hockey League.

“I played in a junior league back home [last year] and they could be up to 20 years old as well,” he said. “I did play against some men last year, but the skill and the speed has increased a lot. The physical aspect: the USHL is two steps above.”

For Tuch, his most memorable experience so far has been winning the Four Nations Tournament in Switzerland in early November.

“It was unbelievable,” he said. “I had the best time in my life. The Swiss Alps were beautiful. They treated us very well. The competition was very good. The highlight was probably beating Russia in the shootout and then standing on the blue line with the other guys and signing the national anthem. We actually made them put it on and stood there arm-in-arm.

“Words can’t even describe it. It was hard because in the Russia game we lost three players to injury. Having them there and our entire team, we had gone through so much adversity — including an eight-game losing streak [prior to the tournament], and to win four in a row was unbelievable.”

Upon returning from Switzerland, Tuch realized that he is fitting right in with Team USA. In particular, he said he has seen his defensive game grow.

“I have gotten better at faceoffs,” he added. “And Coach [Danton] Cole has helped me with defensive zone coverage.”

This all leads into the goals that Tuch has set for himself for the upcoming few weeks.

“I really want to expand my game in the USHL,” he said. “I got off to a slow start. Coming into the Four Nations Tournament, I was doing a little better, and I want to keep that pace up. Team-wise, I want to win the World Under-17 Challenge. That’s our next big tournament.”