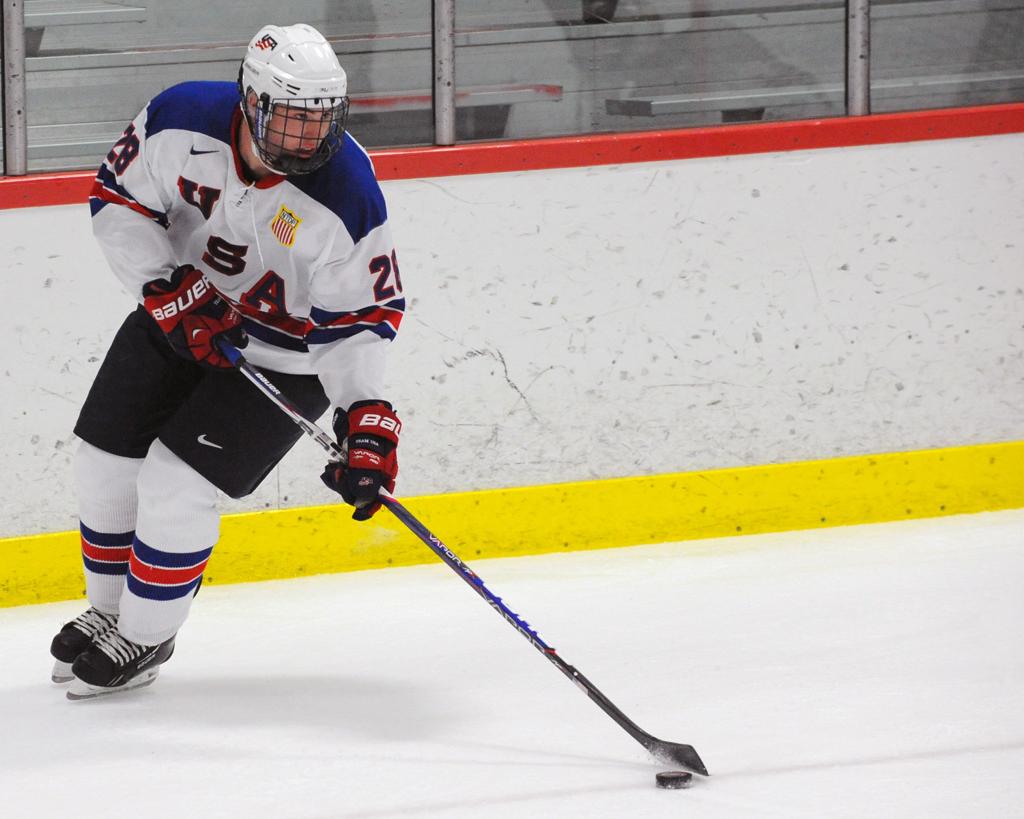 Eiserman will suit up against his future team (New Hampshire) this weekend. Photo by Tom Sorensen.

Growing up, there was one team that Shane Eiserman dreamed of playing hockey for: the University of New Hampshire Wildcats.

“Growing up, at a very young age, it was UNH, UNH and UNH,” recalled the U.S. National Under-18 Team forward. “My Christmas gift from my godmother would be UNH tickets and a UNH jersey. At first, I think I liked the Wildcat and how it sounded. Plus, playing street hockey, we would pretend we were UNH vs. Boston University.”

So it shouldn’t surprise anyone that Eiserman is looking forward to this Sunday’s game at New Hampshire in Durham. The West Newbury, Mass., native has committed to play there once he finishes high school. Eiserman, a high school junior, will play in the United States Hockey League during his senior season. National Team Development Program teammate Tyler Kelleher has also committed to UNH.

“It’s one of those things that I’ll probably look back on and say, ‘Wow that’s awesome,’” he said. “That was my favorite team growing up, and playing them — it’s going to be crazy and a lot of fun. My whole family will be there.

“I fell in love with the school when I visited and said, ‘Dad I want to go there.’”

Understand, the 6-2, 196-pound Eiserman grew up in a hockey-playing family. His father Bill played collegiately at UMass-Lowell, while his brother Billy is currently a sophomore defenseman at that school. Another brother, Chris, is a goalie and post-graduate student at Bridgton Academy in Maine and is looking to play college hockey. Even his 6-year old twin brothers Cole and Caden are into the hockey spirit. 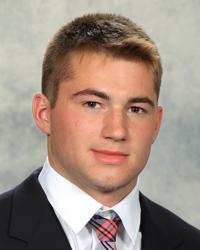 Eiserman's dream was to play for the NTDP. Photo by Dave Reginek.

“It’s been in my family for a long time — my brothers, my dad and all my cousins have played,” Shane Eiserman said. “I was forced to basically play, but from day one I loved it. My brothers and I would battle it out usually.”

So when Eiserman got the call to play for another team — the NTDP — he jumped at that opportunity as well.

“It’s always been a dream of mine to play here, and when I got the opportunity I snapped it up. No questions asked,” he said. “Playing for my country and the level of play is second to none. It’s awesome playing college teams. Where else can you do that?”

Plus, he says of wearing the red, white and blue: “There are no words that can describe it. There is just something when you put it on; it’s awesome.”

Eiserman’s first taste of international play was at the Four Nations Tournament in early November at the Ann Arbor (Mich.) Ice Cube. He said he will never forget the feeling of standing on the ice and singing the national anthem with his teammates after beating Sweden in the championship game.

“Playing another country is an awesome feeling, and especially beating them and winning the thing, it was a great feeling,” he said. “I get goose bumps thinking about it, probably at the blue line with the team and signing the national anthem and in the locker room with the boys afterwards. I won’t forget that; it was my favorite memory from the event and something I will always have.”