Patriotic helmet another way for Demko to honor United States 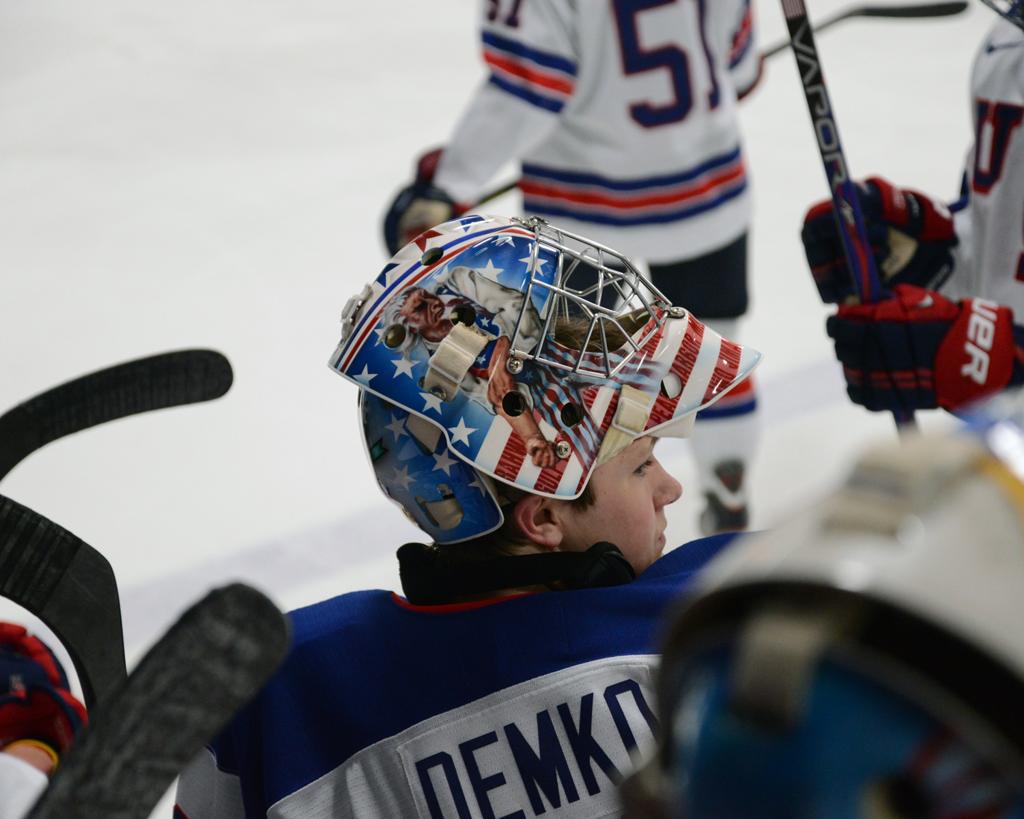 As member of the U.S. National Under-18 Team, Thatcher Demko gets to represent his country through hockey.

And as a goalie on that team, Demko has an opportunity to take that patriotism one step further: through his helmet.

“On one side, I have Uncle Sam; he is just rolling up his sleeve about to punch someone,” Demko said. “It represents the hard work of the country.”

The other side of the helmet is especially dear to Demko’s heart.

“The other side is the symbol for a fallen soldier,” he said. “It has M16 between the two boots with the soldier’s helmet on top. I have pride for all the soldiers that have fallen for this country. It takes a lot, and I’m honored to represent the country, obviously, in a different way than they did. I still like to give them a lot of credit. That was a big part for me and was my first idea for the helmet.

“I also have the support our troops ribbon in yellow.”

The back plate is reserved for a special purpose.

“In the bottom, there are red and white stripes,” he said. “You can’t really see it from far away, but if you get close up you can see there are names of big battles that our troops have won for our country inside the red stripes.

“On the back, I have a tribute to Ian Jenkins [another 1995 goalie who died last year]. Below that, there are two small gold medals with McCartan and Craig on it — those are the two goalies that have won gold medals for the U.S. at the Olympics. I tried to honor them as well since we are going for gold too [at the Under-18 Men's World Championship].”

Demko said his dad helped in the design. He also got some input from a Marine.

“This summer, I worked with a goalie coach in Kansas City and his assistant is a Marine,” he said. “I went to him and asked for ideas about some of the biggest things I could put on to support the troops. He gave me some ideas as well.”

Demko said he wanted to recognize those American heroes because he understands what it means to represent the United States, albeit in a much different capacity. 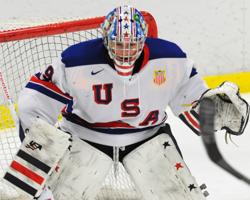 “Walking into the locker room every day and you have the USA on your chest, not everyone gets to do that,” he said. “We are the only kids in the country who do that every day and it is really something special. Before every game, you have to realize who you are playing for and what you are representing.”

The 6-3, 190-pounder’s journey in hockey began when he was four years old, back home in San Diego.

“My entire dad’s side of the family is from Canada,” he said. “My dad has always been a fan and he never played, but when I was born, he had hockey on the TV always and I was watching games growing up.

“To be honest, I don’t really remember [why I wanted to be a goalie]. Everyone is telling me that when you’re at a younger age and playing hockey, every week it’s a different guy playing goal. I guess one week it was my turn and the next week, I was just begging to keep playing. Eventually, they let me keep playing and playing, and that’s how it started.”

Demko had his first taste of international hockey in 2011, when he played on the U.S. Under-17 Select Team. He has also played on the 2012 Under-18 Select Team and the U.S. National Under-17 squad that placed second at the 2012 World Under-17 Hockey Challenge in Windsor, Ont. One of his best memories was stopping 22 shots in a 2-1 shootout victory over Sweden in the semifinals.

“That was a fun one. There was a lot of pressure and, looking back at it, during the game I didn’t understand the severity of the game,” he said. “Now that I look back, there was pressure on that game and it was a lot of fun.”

So it should be no surprise that for Demko and the rest of his Under-18 teammates, the greatest moment from this past weekend’s Four Nations Tournament was standing at the blue line and singing the National Anthem after Saturday’s title game.

“There is no better feeling. You can’t really describe it,” he said. “Standing there with your teammates — I’m getting chills just thinking about it. Even before the game, to hear your anthem, especially playing against the countries. That song is your song; there are no other countries that have it. You are playing for your country right there and by playing that song, it is awesome.”

That’s why honoring his country and the sacrifices that others made is so important to Demko.