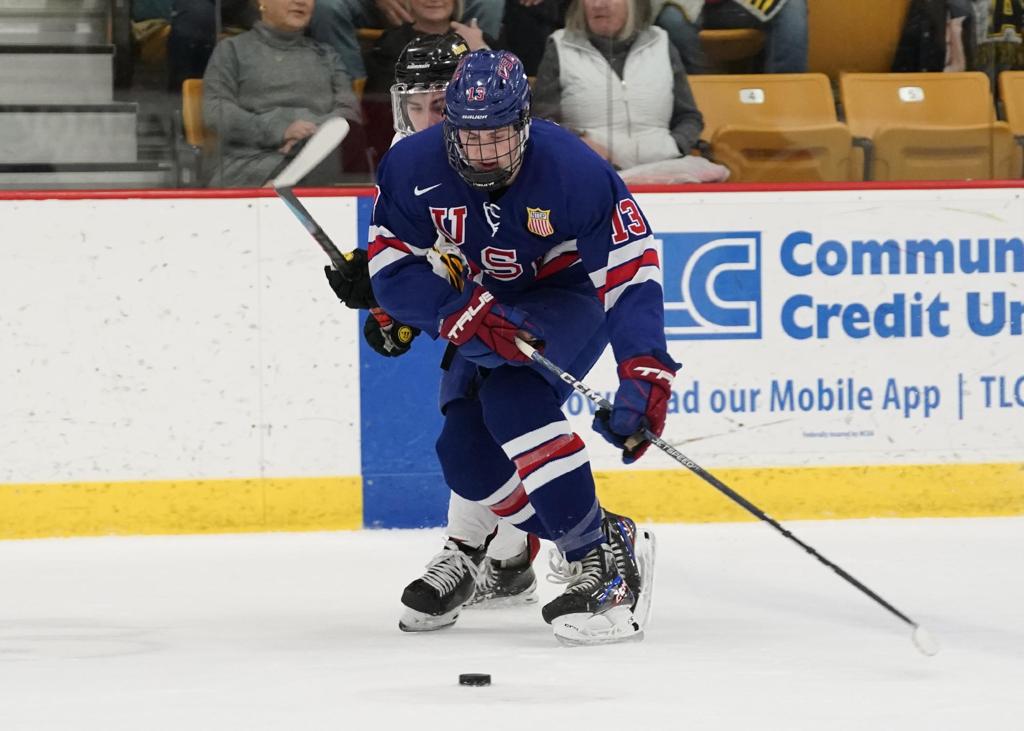 ADRIAN, Mich. - The U.S. National Under-18 Team fought back to tie the game in the third period, but could not retake the lead in a 5-4 loss to the Adrian Bulldogs Tuesday night at Arrington Ice Arena.

After both sides had high-quality chances in the opening minute of play, Team USA grabbed an early lead on Gabe Perreault's 34th of the season. Will Smith (Lexington, Mass.) thwarted an Adrian clearing attempt, drove the net and dropped a pass for Perreault to bang home at 1:22.

The Bulldogs answered quickly and took a 2-1 lead with a pair of goals in a little more than three minutes. Matus Spodniak took a lengthy pass off the right-wing boards and worked a backhand shot through the five-hole of Michael Chambre (Fort Myers, Fla.) to even the game at 3:52. Alessio Luciani followed shortly after as he broke behind the U.S. defense and roofed a quick wrister with 13:54 to play in the first.

The Under-18 Team's top line earned another in the top half of the opening frame to even the score at two apiece. Perreault bodied a defender to win a puck battle behind the Adrian cage and slid the puck out front. Ryan Leonard (Amherst, Mass.) got a stick on the puck and worked it back to Smith in the slot who wired his 24th score of the season.

The home side regained the advantage with 5:04 to play in the first. John Kaljian stepped into a slap-shot from the left circle and found the top corner for a 3-2 Bulldogs lead.

Adrian netted first in the middle period, a power-play goal near the halfway mark from Ryan Pitoschia to make it a 4-2 game.

The U18s narrowed the lead back to one just over a minute later off a great tip-in from Alex Weiermair (Los Angeles, Calif.). Charlie Cerrato (Fallston, Md.) worked the puck through the offensive zone and put a shot on net that Weiermair deflected in. Zach Schulz (South Lyon, Mich.) worked the puck into the attacking zone to pick up a helper.

It was Cerrato who brought the game to its fourth tie with a spinning wrister at 7:10 of the final period. Drew Fortescue (Pearl River, N.Y.) worked the puck out of the defensive zone to Carter Slaggert (South Bend, Ind.). He punched the puck up ice that Cerrato found, spun and found the net for his third goal of the year to even the score.

Adrian retook the lead on a Mathew Rehding chip shot out in front of the crease with 8:31 to play in regulation and that 5-4 score held for the rest of the game.

The Under-18 Team laces them up next Friday night when they travel to Bowling Green State University. Puck drop between Team USA and the Falcons is scheduled for 7:00 p.m. from Slater Family Ice Arena.