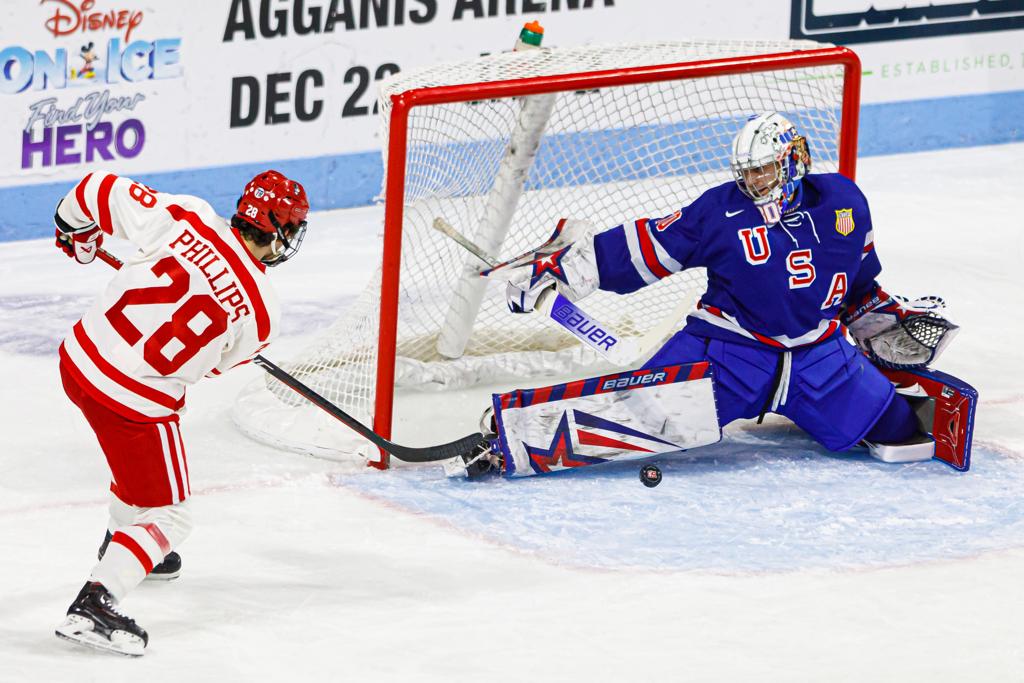 BOSTON - Oliver Moore (Mounds View, Minn.) scored the first and last goals of the game, including the game-winner in overtime, as the U.S. National Under-18 Team topped the Boston University Terriers by a 6-5 final Saturday afternoon at Agganis Arena.

Team USA was on a 4-on-3 power play in the overtime session when Paul Fischer (River Forest, Ill.) corralled his own rebound and dropped for Moore at the right point. The forward shimmied a defender and launched a frozen rope from the right hashmarks for his second of the afternoon and a 6-5 win for the Under-18 Team.

Moore put the U18s on the board just 61 seconds into the game with his 13th marker of the season. From the defensive zone, Fischer chipped a puck down the ice that Moore won the race to. Down the left wing, he sent a quick wrist-shot through the five-hole of Vinny Duplessis for an early 1-0 lead.

The Terriers tied the game on a 5-on-3 advantage at 8:20 of the first. Jeremy Wilmer sent a cross-crease pass to Ethan Phillips, who was denied by Michael Chambre (Fort Myers, Fla.) on the first shot, but got his own rebound and tied the game.

On the ensuing power play, Team USA took advantage of a BU defensive-zone turnover to regain the lead while shorthanded. Will Vote (Arlington, Mass.) grabbed the loose puck and dropped it to Ryan Leonard (Amherst, Mass.) who rocketed a wrister past Duplessis to make it 2-1.

Alex Weiermair (Los Angeles, Calif.) doubled the USA lead to 3-1 after a well-executed 2-on-1 break. Austin Burnevik (Blaine, Minn.) drew two defenders but dropped the puck to spring Weiermair and Carter Slaggert (South Bend, Ind.) into the attacking zone. After the defender covered Slaggert, Weiermair picked the top corner for his third score of the season.

After some fortunate puck luck late in the period, Gabe Perreault (Hinsdale, Ill.) got the goal that gave the U.S. a 4-1 lead into the first intermission. Leonard drove the net and found Will Smith (Lexington, Mass.) at the doorstep. He shoved the puck across the crease and Perreault found a stick on it to make it three scores in a row for the visitors.

The Terriers cut into the lead with the first goal of the middle frame off some good puck luck. Sam Stevens attempted to center the puck from the left wing, but it deflected twice off a U.S. defenseman's stick and over the shoulder of a sprawling Chambre.

After an impressively patient offensive-zone possession, Perreault connected on his second of the afternoon to make it a 5-2 game with a little more than five minutes to play. After a lengthy cycle, Fischer left the puck for Smith who penetrated the Terriers defense. He weaved between two players in white and centered a pass for Perreault, who made no mistake for his seventh multi-goal game of the season.

BU's Matt Brown used a power move to get to the hashmarks and score with 10 seconds left in the period to make it 5-3 after 40 minutes.

The home team added a pair more in the first two minutes of the third to bring the game to a 5-5 tie. Wilmer Skoog netted the first and NTDP alum Lane Hutson made a nice play behind the net before finishing at the scramble in front to make the game even.

Team USA nearly took the lead on a late power play but Vote's one-timer from the bottom of the circle was robbed by Duplessis.

BU's Hutson took a penalty late in regulation that carried into overtime before Moore won the game for the U18s.

Trey Augustine (South Lyon, Mich.), who entered the net in relief of Chambre in the third, made 12 saves as he picked up his 12th win of the campaign.

The U18s head to Connecticut where they will take on Yale University in a Sunday matinee tomorrow at Ingalls Ice Rink. Puck drop is set for 4:00 p.m. ET tomorrow in New Haven, Conn. The game can be streamed on ESPN+.