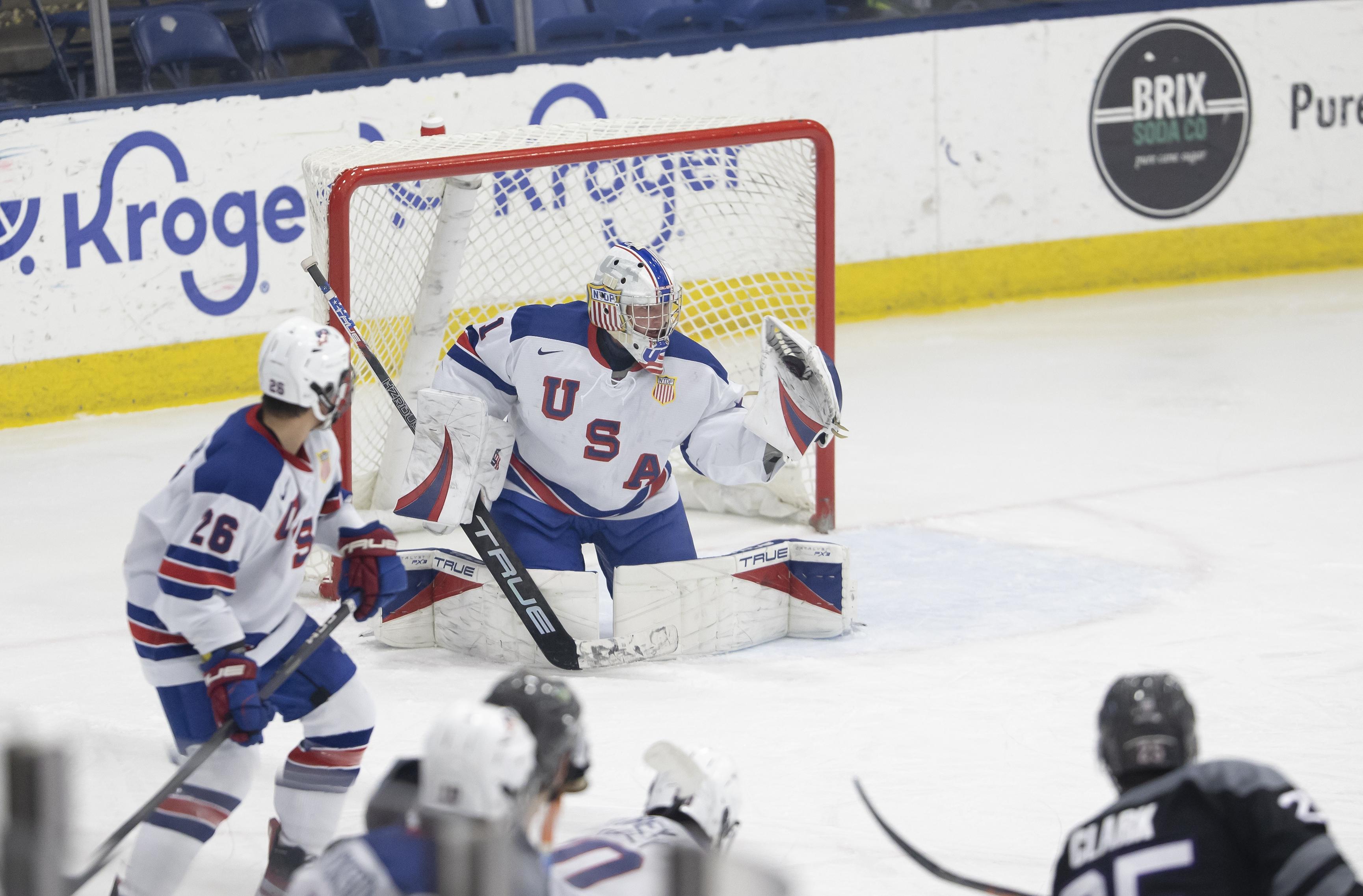 The U18s got on the board at 3:01 of the first after an excellent job from Zeev Buium (San Diego, Calif.) to keep the puck in the offensive zone. After extending the U.S. possession, the defenseman found Will Vote (Arlington, Mass.) at the left faceoff dot where he used a head fake and dropped a pass to Danny Nelson (Maple Grove, Minn.) in the slot. The University of Notre Dame commit one-timed it home to give him double digits in goals this season and Team USA a 1-0 lead.

Team USA used a power-play score 10 minutes later to double the lead. Austin Burnevik (Blaine, Minn.) went dot-to-dot with Fine, who set up Paul Fischer (River Forest, Ill.) on a tee at the slot. The defenseman stepped into a one-timer for his second score of the season.

With just three seconds to play in the opening frame, Moore gave the U18s a 3-0 lead into the intermission. In the offensive zone, Fine started a quick zig-zag passing attack as he found Aram Minnetian (Woodcliff Lake, N.J.) at the blue line. The defenseman found Moore quickly in the slot and he flicked his wrister past Jacob Fowler for his 12th of the season.

Augustine made saves on all five shots he saw in a scoreless middle period.

The Under-18 Team was first to the scoreboard in the final period of regulation as they netted a shorthanded marker at 6:44. Moore intercepted a Phantoms pass in the defensive zone and charged down the ice with Salvatore Guzzo (Old Tappan, N.J.) for a 2-on-0 break. Moore made a quick deke with the puck in front of the cage and left a cross-crease pass that Guzzo slammed home for his fourth of the campaign and a 4-0 advantage.

The Phantoms got on the board with 5:57 to play as Kenta Isogai broke in alone and slid a shot through the five-hole of Augustine as the game ended in the 4-1 final.

Augustine, with a pair of highlight-reel saves in the opening frame, turned aside 23 of 24 Phantoms shots as he picked up his 11th win of the season.

The Under-18 Team hits the ice this weekend on the East Coast in their return to the 2022-23 Kroger College Series. The team squares up with Boston University of Saturday afternoon and finishes the weekend with a Sunday matinee at Yale University. Both of those games can be streamed on ESPN+.