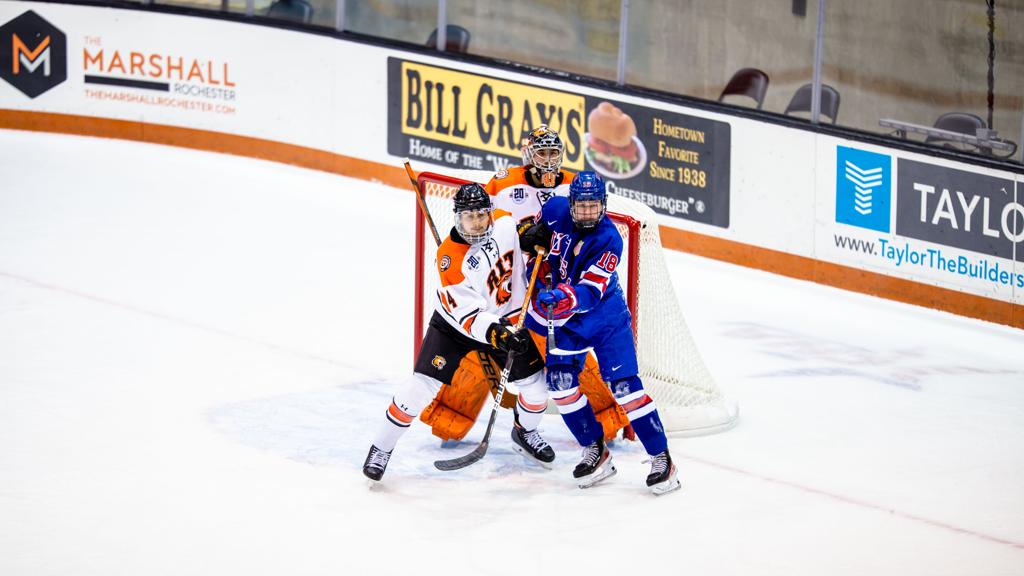 HENRIETTA, N.Y. - The U.S. National Under-18 Team used 23 saves from Trey Augustine (South Lyon, Mich.) and a pair of scores from Gabe Perreault (Hinsdale, Ill.) to skate past the RIT Tigers by a 4-1 final Saturday evening at the Gene Polisseni Center in Western New York.

The home team found the back of the net first at 10:45 while shorthanded. Kobe Walker raced the length of the ice and stole the puck off of Augustine's stick behind the net. He wheeled in front and flipped a backhand into the empty cage for a 1-0 Tigers lead.

The U18s answered less than four minutes later with Ryan Fine's (Center Moriches, N.Y.) eighth score of the season. Fine's initial shot was stopped but he scooped the puck out of the crease to Charlie Cerrato (Fallston, Md.) along the right wing. He sent it back for a slap-shot from Aram Minnetian (Woodcliff Lake, N.J.) that was stopped, but Fine was on the doorstep for the rebound goal to tie the game.

After plenty of back-and-forth action to begin the middle period, the U.S. broke the tie with less than five minutes remaining on a tic-tac-toe passing sequence off a 4-on-3 opportunity. Will Smith (Lexington, Mass.) circled the top of the zone and left a pass for Zeev Buium (San Diego, Calif.) at the left circle. He one-touched it to Perreault, stationed between the hashmarks, where he ripped a one-timer into the bottom corner for a 2-1 lead.

Smith and Perreault teamed up again with 1:05 remaining in the period to give Team USA a 3-1 lead into the second intermission. After Perreault's shot was stopped, Smith picked the pocket of a Tigers skater, showcased his hands as he dangled between two defenders and backhanded a back-door pass for Perreault to bang home from the bottom of the right circle. The goals were the 17th and 18th of the season for Perreault, while Smith's pair of helpers extended his NTDP-record point streak to 21 consecutive games to begin a season.

The U18s made it four in a row with a power-play marker in the last five minutes of regulation. The defenseman entered the offensive zone and found Austin Burnevik (Blaine, Minn.) for a shot from the slot. After the puck was padded away, Janviriya was first to the rebound and fired in on the second chance for his third score of the season.

Augustine was a rock in net all night for the U18s as he turned aside 23 of 24 Tigers shots. After RIT found the back of the net on its fifth shot of the night, Augustine made 19 consecutive saves to pick up his 10th win of the season.

The Under-18 Team returns home to Michigan and to USHL action for a Thanksgiving Eve contest against the Youngstown Phantoms. Puck drop is slated for 7:00 p.m. from USA Hockey Arena on Wednesday evening and tickets can be purchased by calling 734-453-8400 or visiting USAHockeyNTDP.com/tix.