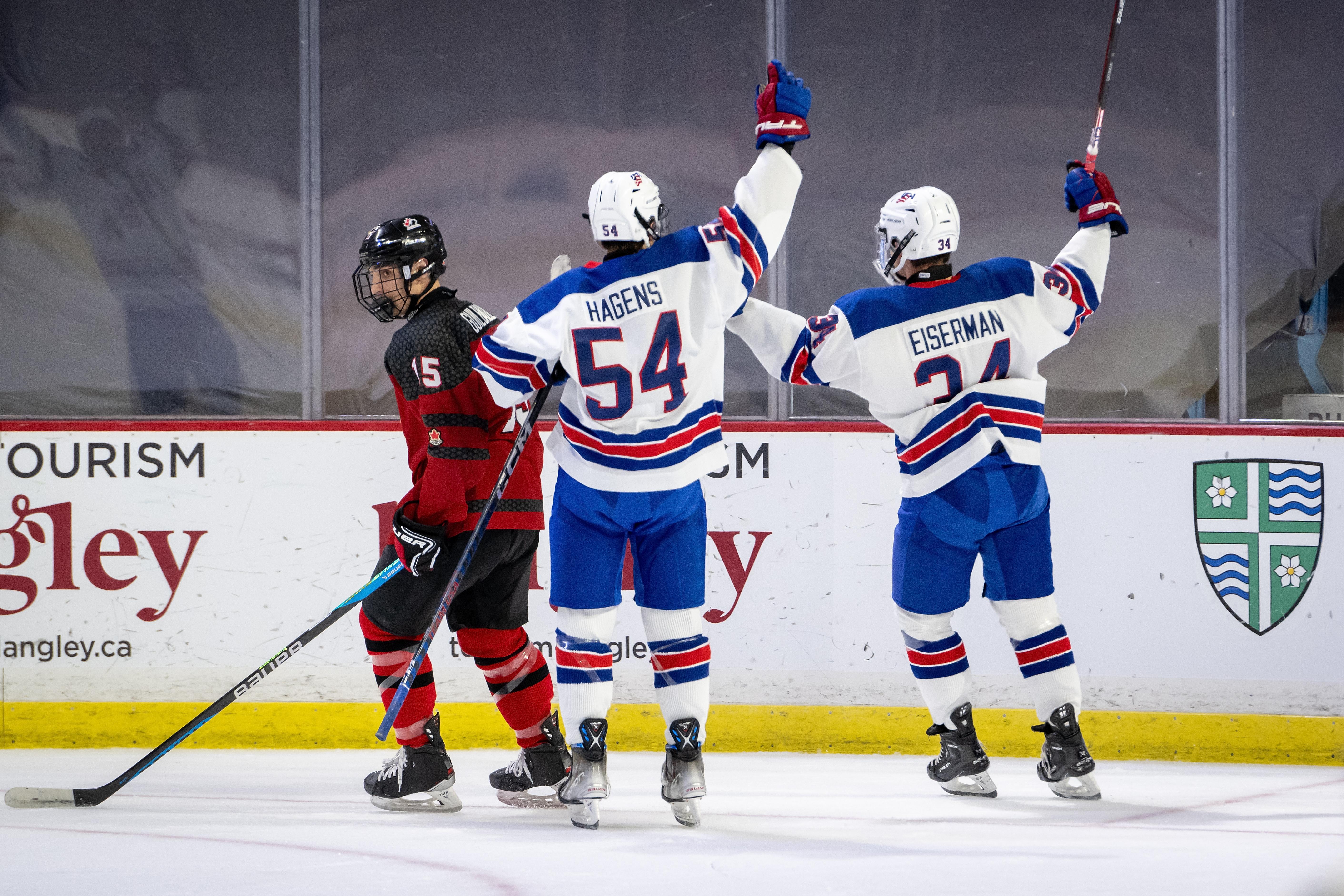 The U.S. quickly put pressure on Canada Red in the first after John Whipple (Minnetonka, Minn.) sent a blast from the point and gave up a rebound for Shane Vansaghi (St. Louis, Mo.) to take a few swings at it but couldn't convert. On the other end, Canada Red felt their presence know near the midway point during their first power play. U.S. starting netminder Nick Kempf (Morton Grove, Ill.) was challenged and stretched out to make a pair of tough saves to keep it knotted at zero.

However, it was the U.S. and Hagens who tallied the first of three in the second half of the opening period. After a Canadian Red defender fanned on an up-ice pass in the defensive zone, Eiserman picked up the loose puck and backhanded a pass to Hagens. Hagens skated towards the crease and ripped home a shot for the lead.

It only took :34 seconds before the U.S. increased their lead to a pair, this time off the tape of Lucas Van Vliet (Livonia, Mich.). Kristian Epperson (Mequon, Wis.) sent a stretch pass from the d-zone to Teddy Stiga (Sudbury, Mass.) at the opposing blue line with Van Vliet trailing. Stiga left a drop pass for Van Vliet to fire one past starting Canadian netminder Gabriel D’Aigle.

Team USA kept it rolling with their third goal in a span of 2:15 as Eiserman got in on the action. Will Skahan (Woodbury, Minn.) collected the puck at the point and quickly read the ice before sending one towards the net. What appeared to be a shot on net turned to a pass to Eiserman dashing across the crease to collect the puck. A quick move opened up space for Eiserman to cash in on his 10th goal of the tournament, tying the U.S. record for goals scored at the World U17 Hockey Challenge. Canada Red had one final attack at the end of the first but good positioning by Kempf kept it 3-0 after one.

The U.S. picked up where it left off in the second as Charlie Pardue (Winnetka, Ill.) potted one 1:28 into the middle frame. Hagens forced a turnover behind the net along the boards where Eiserman pick it up. A speedy feed found the blade of Pardue in the slot to bury Team USA's fourth unanswered. With his assist, Hagens broke the World U17 Hockey Challenge all-time points record, set by former U.S. National Under-17 Team Skater Colin White (2014), with his 19th point of the night.

Canada Red closed the gap to two with back-to-back goals 2:16 apart. A tip in on the power play, followed by converting off a rebound, put the game in reach for them. However, Vansaghi restored the three-goal lead following a blocked shot that got turned aside to Christian Humphreys (Pittsburgh, Pa.) in the neutral zone. Vansaghi joined the rush for a 2-on-1 chance before Humphreys fed him the puck and finished backhand.

The U.S. tallied once more in the second, coming on the power play, after Brodie Ziemer (Hutchinson, Minn.) was on the receiving end of a backhand feed from Eiserman with 4:16 to go.

Canada Red looked to gain momentum with a goal :11 seconds into the third to cut the lead to 6-3, but Brendan McMorrow (Lakeville, Minn.), Epperson and Hagens all scored in a span of 1:23 to put the game at 9-3. McMorrow and Epperson's tally came :14 seconds apart from each other.

Eiserman recorded his fifth point of the night with his tournament leading 11th goal which gave him sole possession as the all-time U.S. goal scorer at the World U17 Hockey Challenge. Hagens picked up another assist on the night, extending his record-breaking point total to 20. Eiserman capped off the hat trick with in the third and tied Alex Ovechkin's all-time goal record at the tournament with 12. The U.S. didn't let up the rest of the way and skated to the 11-3 final.

Kempf started in net for Team USA and stopped 33 shots for his fourth win of the tournament.