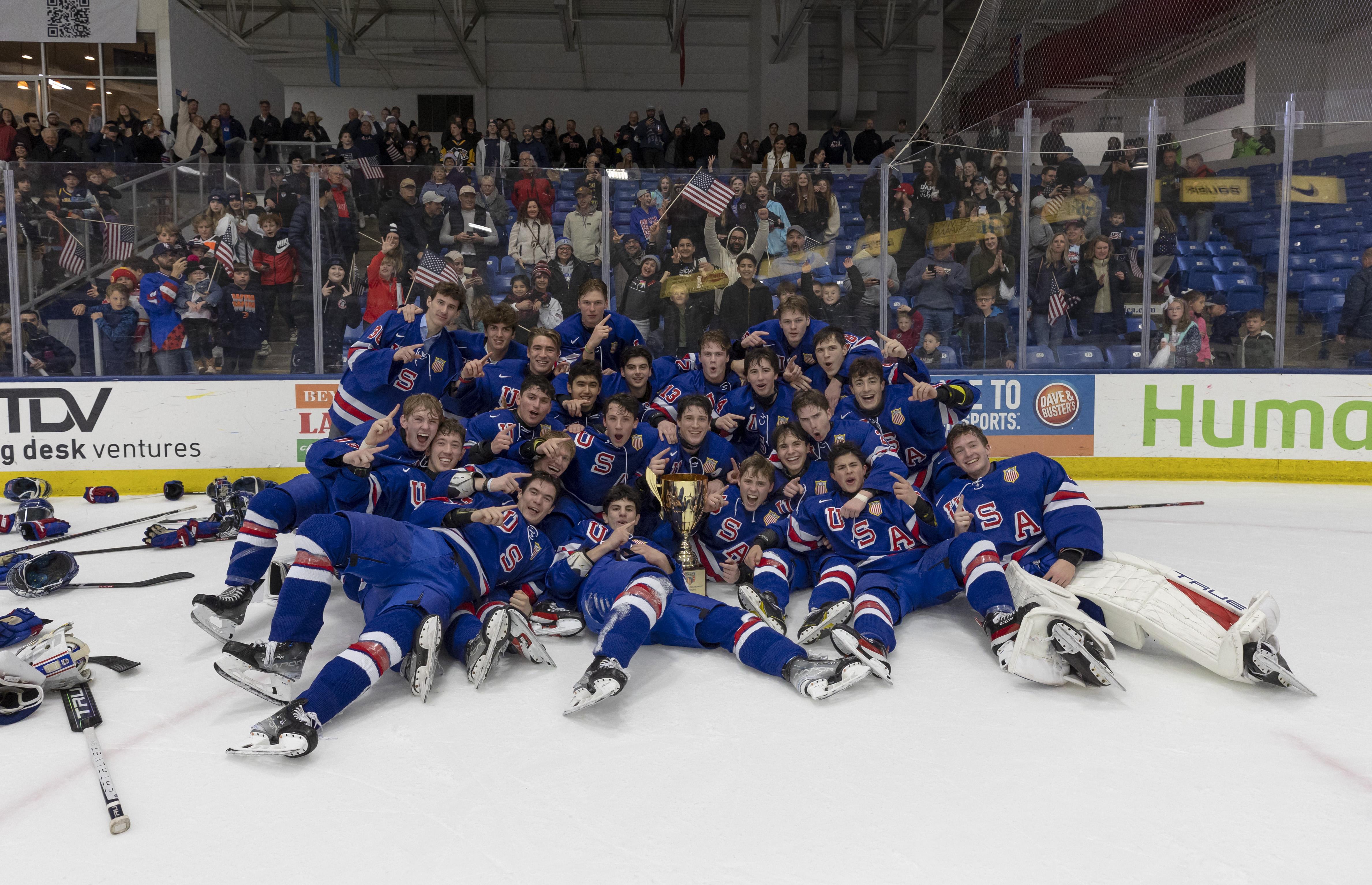 PLYMOUTH, Mich. - The U.S. National Under-18 Team used a pair of goals from Will Smith (Lexington, Mass.) and 29 saves from Trey Augustine (South Lyon, Mich.) to beat Sweden, 5-1, and capture the Five Nations Championship at USA Hockey Arena.

After Sweden's Otto Stenberg netted first with a shot through the five-hole of USA netminder Trey Augustine (South Lyon, Mich.), Team USA responded to even the score after 20 minutes. Zach Schulz (South Lyon, Mich.) started the play shifting the puck off the boards to Will Smith (Lexington, Mass.) along the left wing. He found Gabe Perreault (Hinsdale, Ill.) at the other side of the ice who quickly returned the puck to Smith. His shot beat Melker Thelin over the left pad to tie the game.

The U.S. connected for three goals in the second that started with a Ryan Fine (Center Moriches, N.Y.) score off a goalmouth scramble. Aram Minnetian (Woodcliff Lake, N.J.) pushed the puck off the boards and directed it in front, where Danny Nelson (Maple Grove, Minn.) fished it to Fine in front of the net to sound the horn at 2:36.

Ryan Leonard (Amherst, Mass.) made it 3-1 as he broke in alone in the offensive zone, skated through the crease and snuck the puck behind the sprawling goaltender's left skate. Leonard’s goal at 10:59 was set up from Perreault and Drew Fortescue (Pearl River, N.Y.).

Less than two minutes later, Beckett Hendrickson (Minnetonka, Minn.) wristed a shot to find the back of the net and give Team USA four straight scores. After Fine entered the offensive zone, he dropped a pass for Charlie Cerrato (Fallston, Md.) who left it for Hendrickson at the blue line. He side-stepped a defender, skated to the hashmarks and fired for his fourth point in two nights.

Smith connected again in the third period for the game's final goal. He took a stretch pass from Zeev Buium (San Diego, Calif.) down the left wing and used nice stick skill to cut towards the center slot before he roofed his wrister for his 17th score of the season.

Augustine finished with 29 saves as he picked up his second win of the tournament and ninth of the season.

Team USA outscored its opponents by a combined 29-8 margin over the four games this week.

The win marked the second straight U18 Five Nations victory after last year's team won its lone tournament of the season in Monthey, Switzerland.