Team faces Sweden tomorrow night with championship on the line 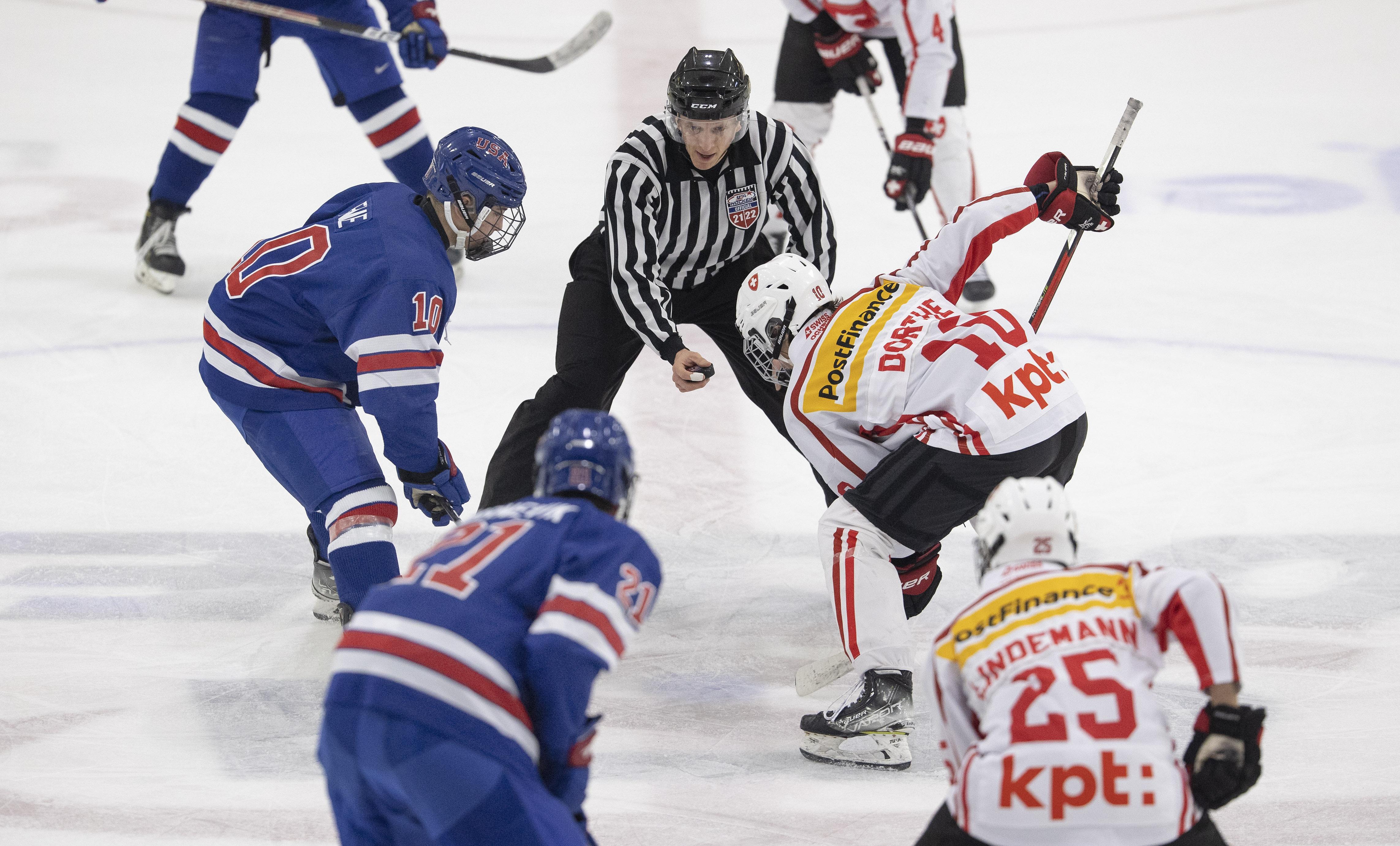 PLYMOUTH, Mich. - The U.S. National Under-18 Team defeated Switzerland, 11-1, Friday night in their third game of the Five Nations Tournament inside USA Hockey Arena. Team USA enters their final game of round robin play 3-0-0-0 and will face off against Sweden, who is also 3-0-0-0, for the championship.

Team USA used four goals in just over five minutes to take a commanding lead after 20 minutes. Danny Nelson (Maple Grove, Minn.) kicked off the game's scoring with a great redirection in front of the cage. Defenseman Zeev Buium (San Diego, Calif.) and Aram Minnetian (Woodcliff Lake, N.J.) criss-crossed at the blueline before Minnetian snapped a wrister that Nelson got a piece of for the lead.

Will Smith (Lexington, Mass.) doubled the U18 lead off a pretty move as he dangled the puck past his opponent and capitalized on a snipe from the slot that beat Diego Simeoni over his left shoulder. Ryan Leonard (Amherst, Mass.) made a nice hustle play to knock the puck back to Nathan Tobey (Lantana, Texas) at the right point, who fed Smith for the 2-0 lead.

Team USA extended the lead after Will Vote (Arlington, Mass.) netted a shorthanded goal. Nelson sped the puck into the offensive zone after a takeaway on the blue line and found Vote, who crashed the slot area to put the U18s up unanswered by three.

Gabe Perreault (Hinsdale, Ill.) made connected on a centering feed from Smith to make it 4-0 after 20 minutes. After a hard forecheck caused a Swiss turnover, Smith collected, turned and fed Perreault for a one-timer from the slot.

Switzerland's Nino Niedermann put them on the board in the second, but Team USA responded with the next four goals of the period. Smith earned his second of the game with a one-timer on the power play off a set-up from Leonard at 7:19 of the second.

The Under-18 Team then used three goals in 34 seconds to take an 8-1 advantage. Ryan Fine (Center Moriches, N.Y.) scored from the left wing off a great defensive-zone exit from Charlie Cerrato (Fallston, Md.) and a cross-ice feed from Beckett Hendrickson (Minnetonka, Minn.).

After Brady Cleveland (Wausau, Wis.) played the puck across the ice to Minnetian, the defenseman fired a stretch pass to Perreault who broke through the middle of the ice and toe-dragged two defenders before he finished for his second of the night.

Sixteen seconds later, Fine intercepted a pass at center ice, broke in alone and finished five-hole for his first multi-goal game at the NTDP.

On a late power play, Zach Schulz (South Lyon, Mich.) found Oliver Moore (Mounds View, Minn.) who changed his angle with a drag before firing in for a 9-1 U.S. lead after 40 minutes.

Hendrickson and Guzzo tallied in the third period to give Team USA the 11-1 win.

Carsen Musser (Sherburn, Minn.) made 16 stops on the evening to pick up the win for the Under-18 Team.