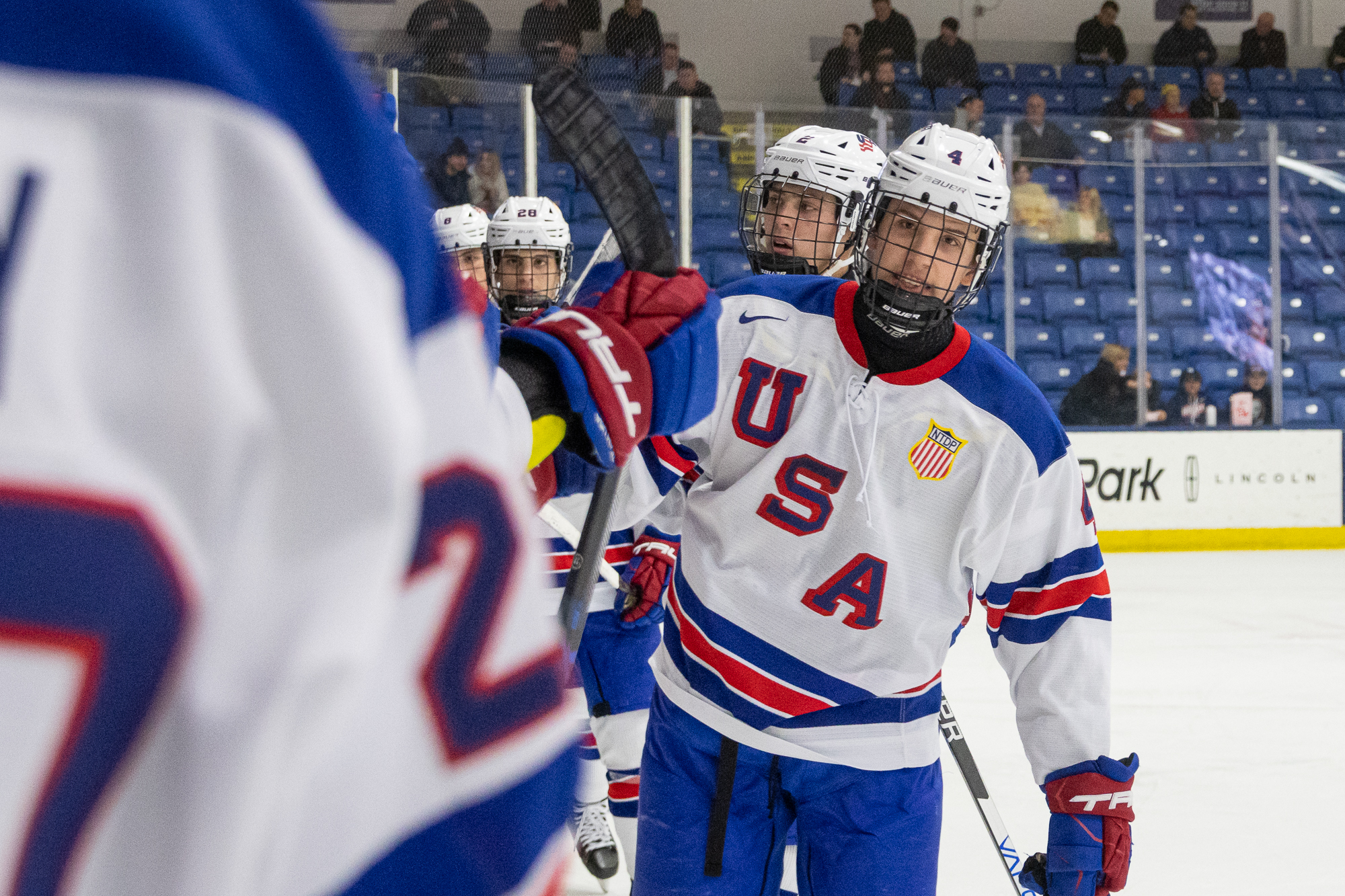 Finland jumped out to a 1-0 lead halfway through the first period on Jesse Nurmi’s second goal of the tournament. Jesse Kiiskinen won a battle along the boards and quickly got it to Nurmi in the slot who fired it into the back of the net.

Team USA went on to reel off six consecutive goals, two of them coming before the close of the opening period.

Will Smith (Lexington, Mass.) answered first for Team USA three minutes later. A Finland shot missed the net and wrapped around the boards all the way out to center ice where Perreault picked it up and used his speed to create a 2-on-1 with Smith. Perreault fired a shot off the goalie's left pad and Smith cleaned up the rebound to extend his point streak to 17 games to start the season.

The U18s took the lead later in the period on another odd-man rush started by Perreault. The Boston College commit carried the puck into the zone and cut to the middle where he dropped a pass back to Leonard who quickly slid the puck over to Aram Minnetian (Woodcliff Lake, N.J.) for a backhand shot. Perreault was there for the rebound and passed along to Leonard who sent it into a wide open net for a 2-1 lead.

Moore scored his first of back-to-back goals at 2:17 of the middle frame on a sweet wraparound goal. Minnetian fed the speedster down the left wing and Moore took it behind the cage and tucked his shot for a 3-1 lead.

Set up by Moore and Danny Nelson (Maple Grove, Minn.), Moore connected for his second of the night just over two minutes later. He took the pass from the defenseman, took a stride to the hashmarks and wripped a wrist-shot into the top corner.

Leonard netted the goal of the tournament while shorthanded to extend the U.S. lead to 5-1 at 6:29 of the period. After taking a pass from Moore in the defensive zone, Leonard broke out and dangled and weaved his way between three Finnish defenders before finishing with a nifty backhand shot for his 15th score of the season.

Perreault made it six in a row for the red, white and blue after he smacked home a quick shot from the left circle off nice passes from Smith and Zeev Buium (San Diego, Calif.).

Kiiskinen made a nice side-step move to get behind the U.S. defense and used a quick wrister to stop the scoring stretch and make it a 6-2 game after 40 minutes.

Finland connected again in the first five minutes of the third to cut the lead to 6-3, but Perreault answered with his second of the night to restore the four-goal lead. Smith earned a helper to on the score to give him a three-point night.

Finland's Tuomas Uronen and Janne Peltonen found the back of the net in the final five minutes of regulation to make it a 7-5 final.

Michael Chambre (Fort Myers, Fla.) went the distance in net for Team USA and earned his second win of the season in three appearances.

The U.S. is off tomorrow evening before returning to the ice Friday night to host Switzerland for a 'White Out'. Tickets are available by visiting the USA Hockey Arena box office or calling 734-453-8400.