Five players earn a pair of points in USA win 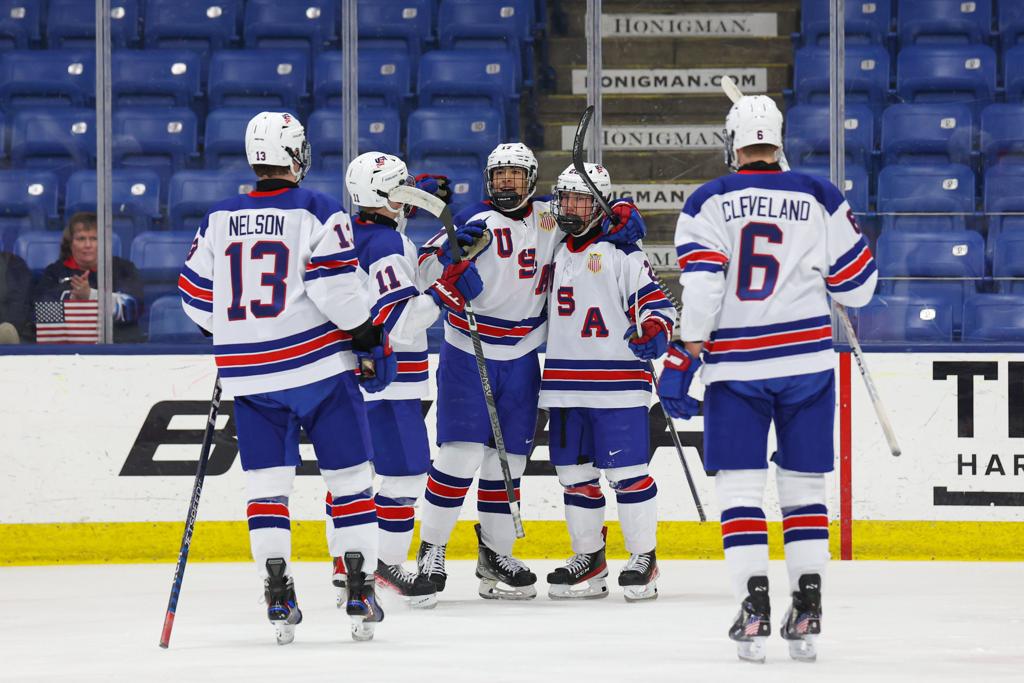 Team USA opened up its first game of international play with a dominating first period as they outshot Czechia 11-4, but couldn’t convert any chances.

Zach Schulz (South Lyon, Mich.) had the first major scoring opportunity of the night with a slap shot that rang off the post. Later on the power play, Gabe Perrault (Hinsdale, Ill.) took a centering pass but his shot flew over the outstretched glove of Czechia goaltender Adam Dybal.

Fifty seconds into the second, Ryan Fine (Center Moriches N.Y.) kicked the scoring off with a wrist shot from the right point. Off a faceoff win by Oliver Moore (Mounds View, Minn.), Aram Minnetian (Woodcliff Lake, N.J) collected the puck and found Fine who fired for his fourth goal of the year.

Later in the period, Moore notched his second point of the game with a shorthanded goal on the breakaway. Ryan Leonard (Ahmerst, Mass.) stole the puck from a Czech defender and sent a lengthy pass behind the Czech defense to send Moore in alone for the score.

Minnetian made it three in a row with a wrist shot from the left faceoff circle. After a show went wide from Danny Nelson (Maple Grove, Minn.) Will Vote (Arlington Mass.) circled the offensive zone and found the defenseman with a back-door feed for his third score of the season.

Team USA picked up its fourth consecutive goal as Will Smith (Lexington, Mass.) extended his point streak to 16 games with his 11th goal of the season. The play began in the defensive zone as Leonard stole the puck off the Czech offensive attack. He found Drew Fortescue (Pearl River, N.Y.) along the left wing, who sent the puck to Smith for a breakaway score.

Czechia stopped the U.S. scoring run with 3:22 left in the period with a goal from Samuel Fiala to make it 4-1 at the end of two.

Kai Janviriya (Bloomfield Hills, Mich.) notched his second of the year to make the score 5-1. Alex Weiermair (Los Angeles, Calif.) weaved his way into the offensive zone and centered a pass to Austin Burnevik (Blaine, Minn.). The puck deflected off Burnevik's stick to Janviriya, whose shot deflected off Dybal and trickled in.

Burnevik netted his third goal of the season from Weiermair to give both two points and make it a 6-1 final.

Team USA's hits the ice again tomorrow evening as they take on Finland. Puck drop is 7:00 p.m. from USA Hockey Arena and will be streamed live on USAHockeyNTDP.com/watchfivenations.