U.S. maintain perfect 5-0-0-0 record with one preliminary round game to play 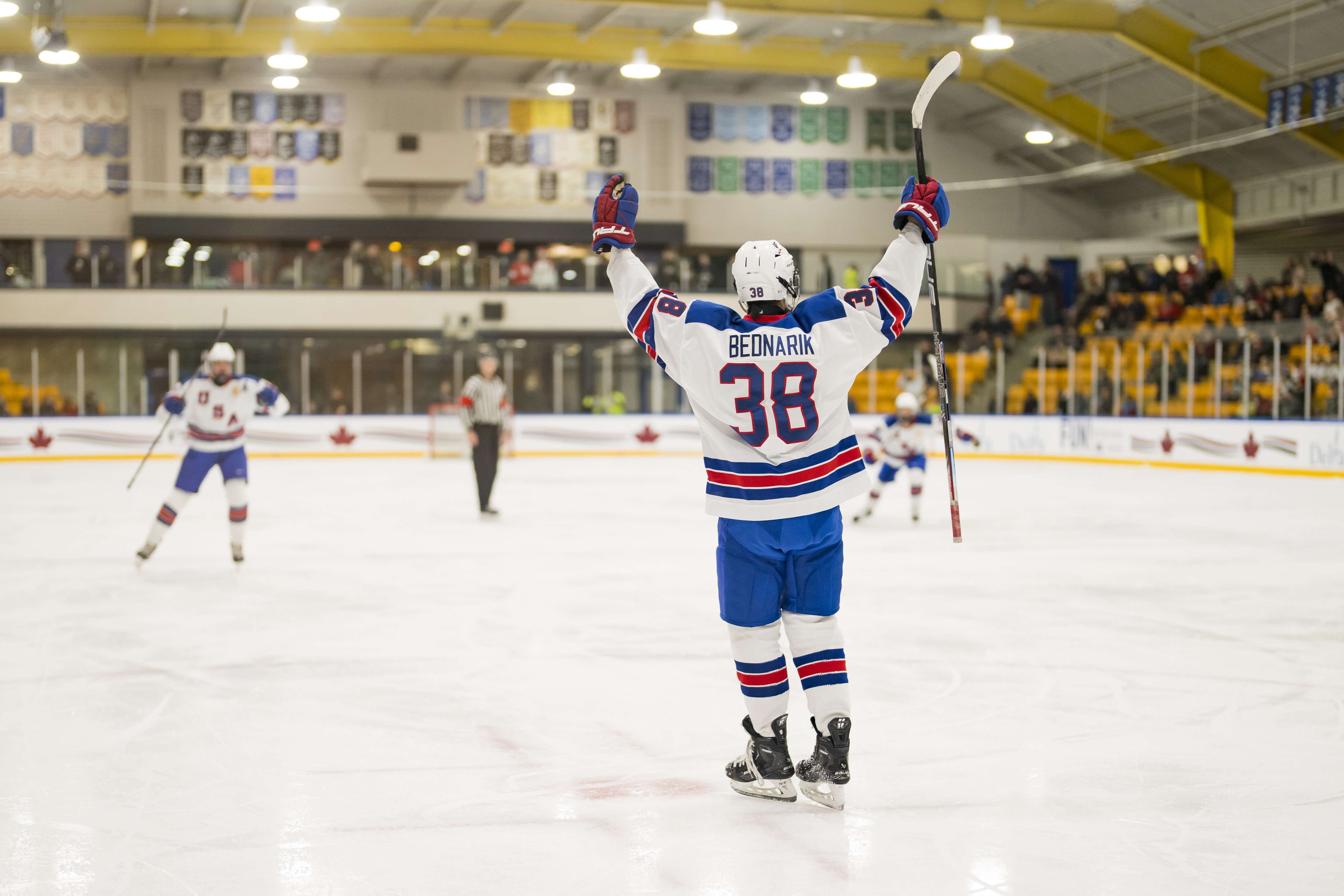 DELTA, British Columbia – With one more game to play (Nov. 10), the U.S. National Under-17 Team punched their ticket to Saturday's gold medal game after they defeated Canada Black, 6-1, Tuesday night inside the Sungod Arena at the 2022 World U-17 Hockey Challenge. James Hagens (Hauppauge, N.Y.) tallied a pair of goals to bring his tournament point total to 14 (5G, 9A) while Teddy Stiga (Sudbury, Mass.) netted the eventual game-winning goal in the first.

Team USA nearly put one through in the opening 1:30 of the period as Hagens split the Canadian defense and found Cole Eiserman (Newburyport, Mass.) on the wing but Canada Black’s starting netminder Ryerson Leenders blocked it aside.

While shorthanded, a bad offensive-zone pass from Canada Black pushed the puck towards the neutral zone boards. Brodie Ziemer (Hutchinson, Minn.) raced towards it and chipped it into the zone where Kamil Bednarik (Elmhurst, Ill.) followed. Although Canada gained possession of the puck, Bednarik forced the turnover and executed a wrap around for the early lead, 3:27 in.

The U.S. extended its lead to a pair with 6:14 to go after a tip-in from Stiga. Max Plante (Hermantown, Minn.) snapped it to John Whipple (Minnetonka, Minn.) who side-stepped along the blue line before rifling a shot on net. The shooting lane was packed as Stiga got his stick on it for the tip-in.

A failed Canadian dump off was intercepted by Eiserman who made a no-look, backwards pass to Hagens all alone. Hagens twirled right-side towards the goalie and pushed the puck through, 7:32 into the second, for his fourth of the tournament and 13th point in five games. Alongside Hagens, Eiserman picked up his 12th point of the tournament.

The U.S. continued to up the pressure on Canada Black and continued to push through to try and secure their spot in Saturday's gold-medal game with a game to spare. Lucas Van Vliet (Livonia, Mich.) gave the team more of a cushion with his first of the tournament and extending the lead to 4-0. As time was expiring, with less than two minutes to go, Kristian Epperson (Mequon, Wis.) sent a stretch pass to Van Vliet at center ice. Van Vliet turned on the jets across the blue line and turned the Canadian defense around before some stick handles in front of the net which led to the eventual goal.

Canada Black kept the puck in its offensive zone for nearly two minutes before Thomas Desruisseaux opened the scoring for the team with 13:05 remaining.

Ziemer answered back five minutes later to regain the four-goal lead for his second of the tournament. Plante poke checked the puck away for an offensive zone turnover before saucing the puck over two Canadians stretching their sticks along the ice. Ziemer quickly got ahold of the puck and snapped it into the back of the net. Hagens tallied one final goal of the game, with the helper going to Eiserman and Stiga, with 1:32 left to play to secure the 6-1 win.

The Under-17 Team wraps up preliminary round play Thursday (Nov. 10) against Canada White before the gold medal game Saturday (Nov. 12) at 8:00 p.m. ET. Puck drop for Thursday's game is set for 10:00 p.m. ET and can be streamed live here.