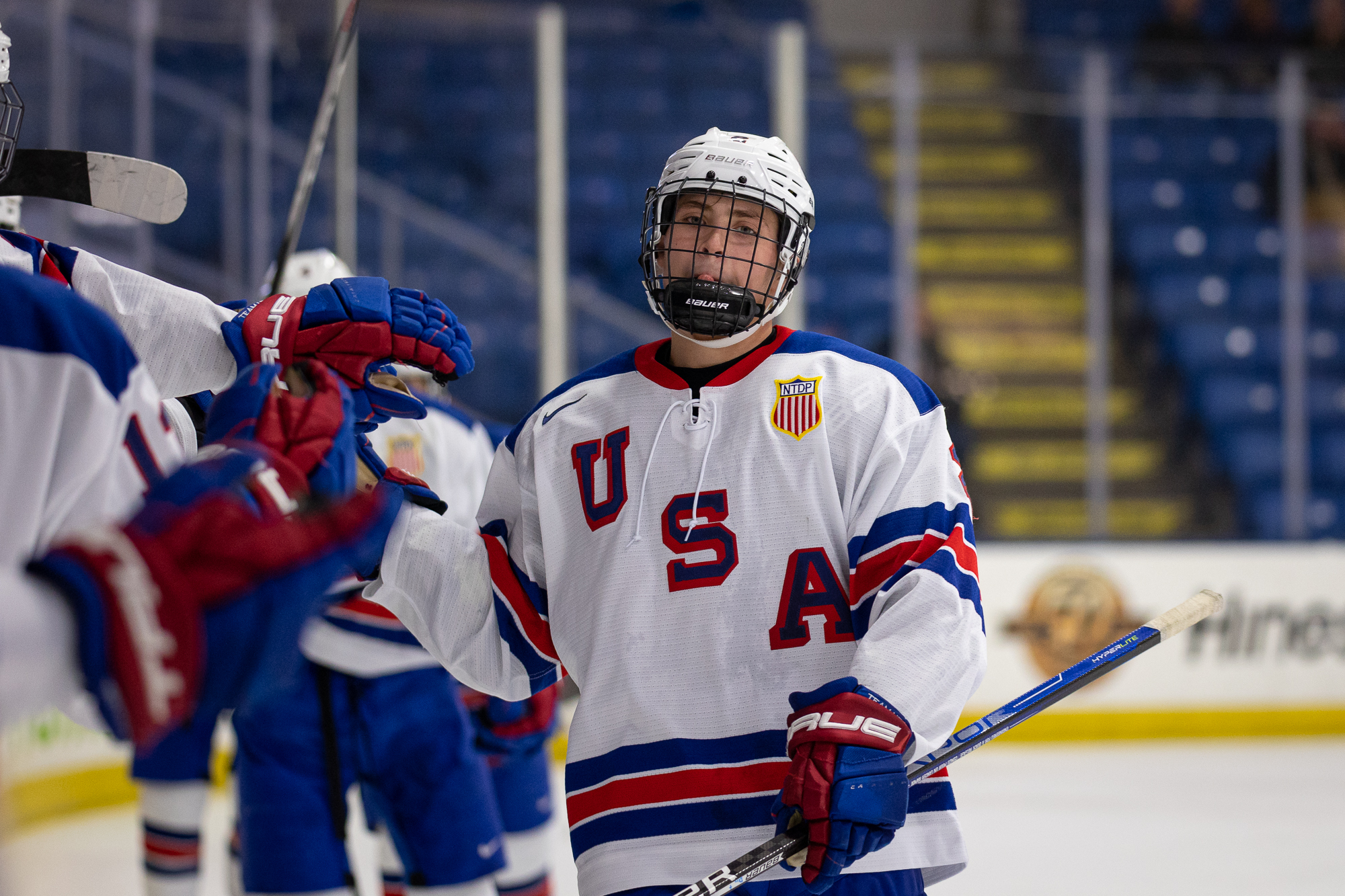 PLYMOUTH, Mich. — The U.S. National Under-18 Team continued their homestand Friday night at USA Hockey Arena with a 3-2 win against the Youngstown Phantoms, led by a goal apiece from Danny Nelson (Maple Grove, Minn.), Will Smith (Lexington, Mass.) and Gabe Perreault (Hinsdale, Ill.) to improve to 13-1-0-0.

The pace was set from the beginning of play as 6:04 ticked by before the games first whistle, caused by a Youngstown penalty. A minute into skating with an extra attacker, Smith wound up a shot from atop the face-off circle and rang one off the pipes. Neither team let up the tempo as both sides recorded multiple scoring chances. With less than five minutes on the clock, after Youngstown starting netminder Jacob Fowler made a stretch save, Will Vote (Arlington, Mass.) narrowly broke the stalemate, but Fowler covered up the rebound. Youngstown gave one final push to be the first on the board with two minutes left, but starting U.S. goaltender Michael Chambre (Fort Myers, Fla.) made a pair of saves to keep it at zero after 20.

Following a scoreless first period, the Phantoms were the first to get on the board, 2:15 into the second period. Chambre stretched to make an initial save in front of the net, before the Phantoms’ Jake Rozzi batted the rebounded puck in midair to give the Phantoms a 1-0 lead.

Nelson cut the Phantoms lead at 15:08 in the second period on the power play, making it a tie game once again. Austin Burnevik (Blaine, Minn.) picked up the loose puck on the blue line and fed it to Alex Weiermair (Los Angeles, Calif.) at the bottom of the face-off circle. Weiermair dished it back to Burnevik who put one on net for Nelson to redirect across the goal line.

The U18s weren’t done scoring though as Smith gave the team their first lead with less than a minute left to play.  Following a long pass from Perreault, Smith escaped a pursuing defender, banging a breakaway shot past the Phantoms’ netminder. With his goal, Smith extended his historic point streak to 14 games while putting the U18s up at 2-1 heading into the third period.

The Phantoms’ Rozzi scored the lone goal of the period late in the third, for the 2-2 tie and to force overtime.

Overtime would end quickly though, exactly :24 seconds into extra time, as Perreault netted the game winner, his third game-winning goal of the season. Smith dished one out to Perreault who skated the puck past the blue line, and fired off a quick shot from in front of the net to secure the 3-2 win.

Chambre returned to ice in his first game of the season and secured the win with 24 saves.