The U18 team is led by head coach Dan Muse, who returns 23 players from one season ago. The group — who was led in overall scoring by Will Smith with 64 points in 63 games last year — has trained and played together for one full year.  In addition, they spent the month of May doing off-ice training after their season ended.

For the coaching staff – Muse, along with assistant coaches Chad Kolarik and Anthony Walsh, the second year can be an easier transition.

“The players are in such a different place than the year before,” Muse said. “They know the day-to-day expectations and the environment. They have acclimated to that daily process to take advantage of everything for their development. They are in a different place — a year older and a year stronger.” 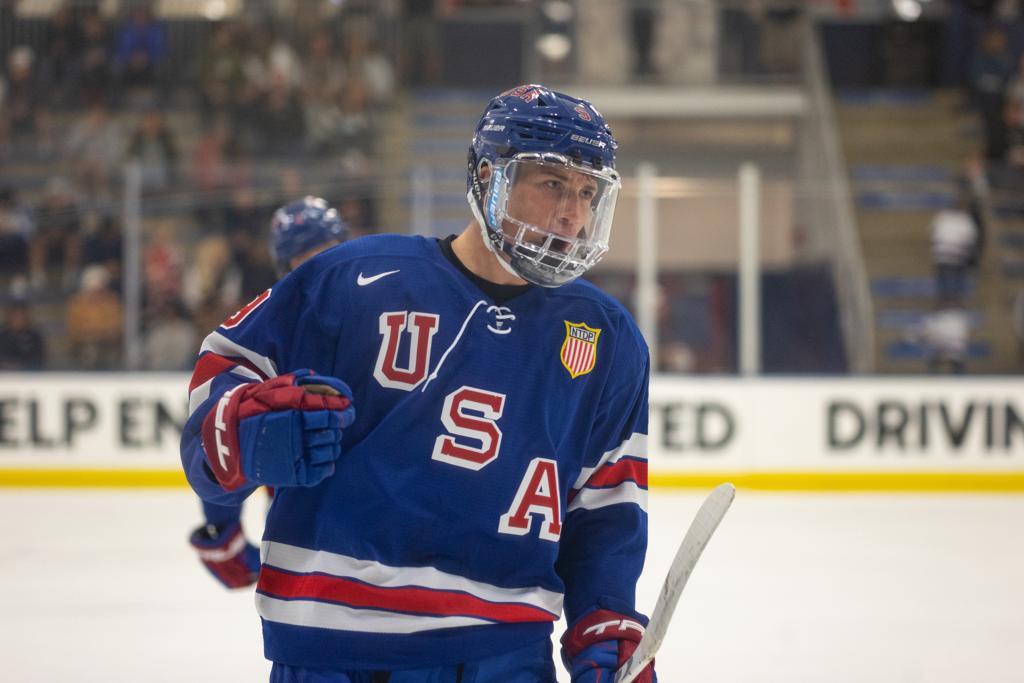 Ryan Leonard celebrating after a goal on Sept. 17 (Photo by Michael Caples)

Zach Schulz, a defenseman on the U18 team from South Lyon, Michigan, said he has already noticed a big difference in his second season with the red, white and blue.

Meanwhile, U18 forward and Amherst, Massachusetts, native Ryan Leonard is already feeling more comfortable on the ice in his second season. He currently has 11 points (6 goals, 5 assists) through the first six games.

“Coming into a team where you have all the best players in your birth year, at your age, you earn your role on how you will make a future in hockey,” Leonard said. “I know my role and hockey identity and I’m proud of it and excited for it.

“I can’t describe how close we are – it’s really a family. We root for each other and want the best for everyone.”

The U18s add a new twist this season as the schedule now features games against NCAA Division I and III teams. In addition, they will play in the USHL as well as three international tournaments — U18 Five Nations in Plymouth, Michigan, in November, the U18 Five Nations in Finland in February and the U18 World Championship this April.

“Any time you get to wear that USA jersey, it’s special every day, even in practice,” Muse said. “To represent the U.S. in international play, on our home soil, it’s an added bonus. We don’t want to look too far ahead but I think how lucky we are to host the Five Nations. To play in our own building is really something special.”

Before that first tournament, the U18s will have a hefty schedule, including eight straight college contests. They opened the college portion of their schedule last weekend with two wins. The NTDP posted a 4-3 win at Michigan State, which is coached by former NTDP head coach Adam Nightingale, on Saturday. The squad followed that up with a 5-3 win at Notre Dame, who is led by NTDP founder Jeff Jackson, on Sunday.

“It’s a new challenge that is in front of the players,” Muse said about the college schedule. “That is one of the things we have here at NTDP. We want the players to always feel challenged. Playing against the top NCAA teams, where there is even more of an age gap. They are learning how to adjust their game plan with less time and space.”

Schulz completely agrees with that assessment.

“It’s the best way to develop,” he said on the college games. “We feel more comfortable playing in those situations. There is nowhere else than you can play against college teams when you are not in college.”

The Under-17 team is led by first-year head coach Nick Fohr. Even though it’s his first season at the helm, he spent 11 seasons working as an assistant and associate coach with the NTDP. He can use those experiences to help build that success for the team.

“As long as I have been here, these kids develop and change over time,” Fohr said.

“I like to use those games between those international events to make sure the players are getting new chances and opportunities to show how they have gotten better and how they have progressed. It’s a fluid situation for them and changes day-by-day. You never know what you are going to get with the younger game. It’s all about consistency.” 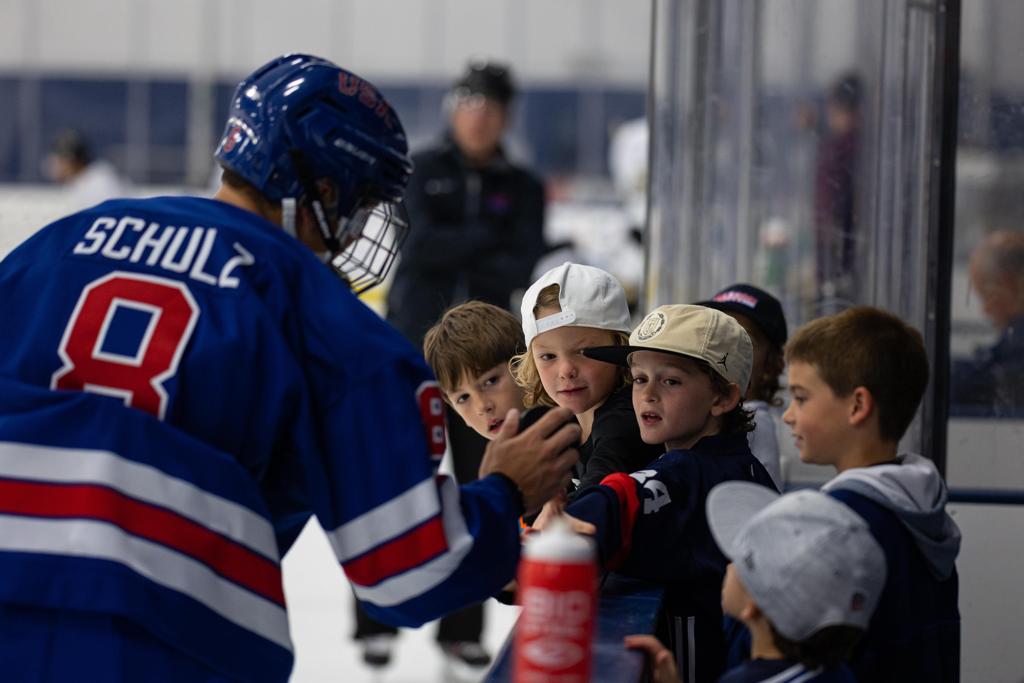 The U17 schedule features games against NAHL and USHL opponents, as well as three international events this year, including the U17 Challenge in Canada in November, the U17 Four Nations in Switzerland in December and the U17 Five Nations, also in Switzerland, in February.

The squad has played four games against NAHL opponents and opened USHL play at Cedar Rapids this past weekend, splitting the two-game series.  The team will open their first home series against the Chicago Steel on Oct. 14 and 15 at USA Hockey Arena.  The first few weeks are important in the development of the U17s.

“We are really focused on the team,” said Fohr. “We want to bring everyone together and experience things together. The focus hasn’t been on X’s and O’s; rather, it’s been about building habits and developing habits that translate into being a winning hockey player.” 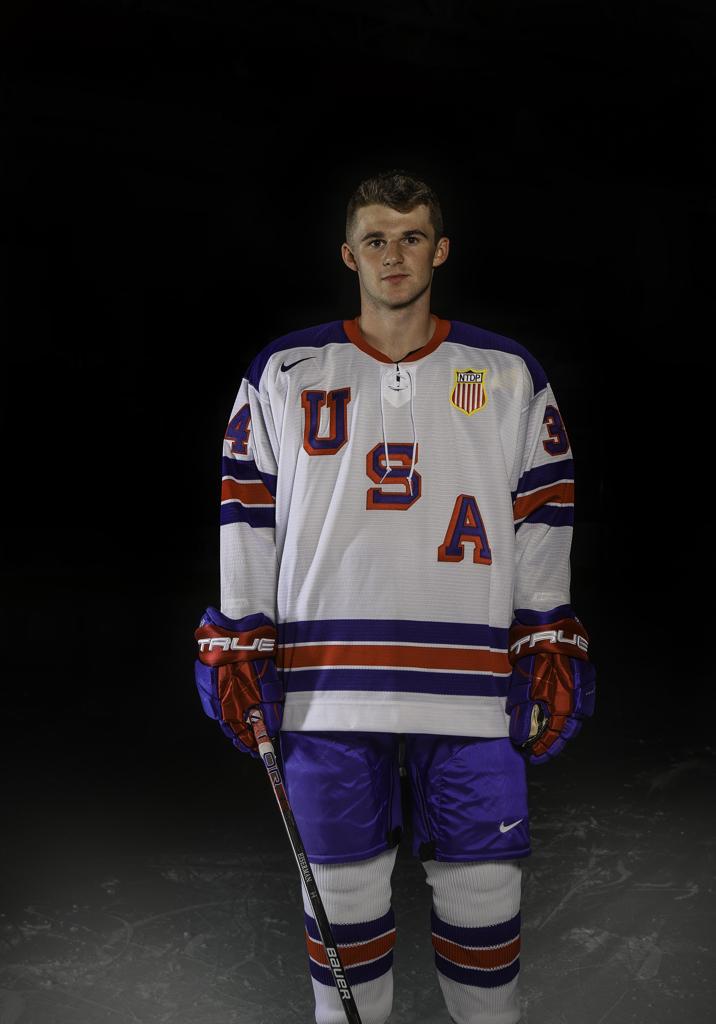 The U17 roster features a few players with previous ties to the program. Cole Eiserman’s brother Shane played for the NTDP from 2012-13; Cole Hutson’s brother Lane suited up for the NTDP from 2020-22; and Dakota Rheume-Mullen’s brother Dylan St. Cyr played between the pipes from 2015-17. In addition, his mom represented Team Canada at the 1998 Olympics.

For Eiserman, a forward from Newburyport, Massachusetts, it has been a transition, but he has learned plenty about himself and his teammates during this first month in Plymouth.

“It’s been a lot but it’s really good,” he said. “We are at the rink all day so it’s hard work, but you are always with the guys. It is what you want to do.”

It should come as no surprise that he also took some words of advice from his brother on the expectations of the program.

“He just said that it will turn into a beast no matter what so take it day by day,” Eiserman said. “You need to think of it that way and everything will take care of itself.”

That’s consistent with the message that the U17 coaching staff has been telling the players daily.

“It’s trying to teach them to be a pro,” Fohr said. “It can be hard to show up, even when you don’t feel well. We still talk about how you have to find the energy and get through practice because that is important. You either get better or you get worse. It’s all part of the development process.”