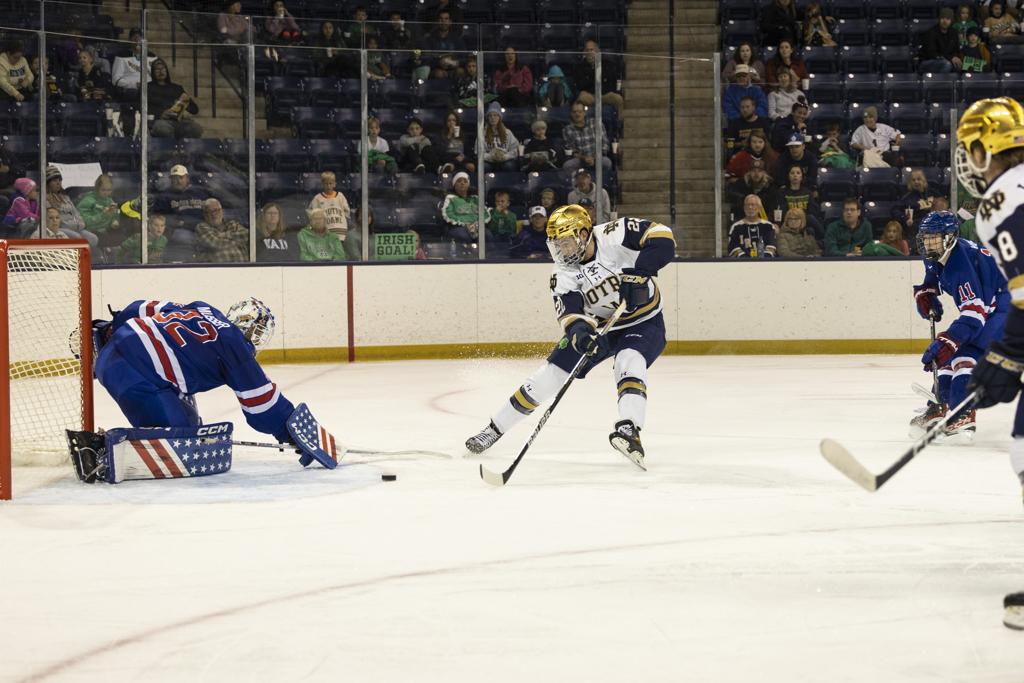 SOUTH BEND, Ind. - Gabe Perreault (Hinsdale, Ill.) broke a 3-3 tie in the third period with his second goal of the game to give Team USA its first lead and propel the U.S. National Under-18 Team to a 5-3 win over the Notre Dame Fighting Irish Sunday at Compton Family Ice Arena.

Notre Dame raced out to net the game's first goal as NTDP product Ryder Rolston lifted a second-chance opportunity on the backhand over the right pad of USA netminder Carsen Musser (Sherburn, Minn.).

After Notre Dame took a major penalty, the U18s responded to tie the score on the ensuing power play. Oliver Moore (Mounds View, Minn.) charged down the left wing and put the initial shot on goal, that was stopped by Ryan Bischel. Alex Weiermair (Los Angeles, Calif.) collected the rebound and centered a pass to Austin Burnevik (Blaine, Minn.) in the slot, who one-timed a quick shot to tie the game at 1-1.

Notre Dame regained its lead on a nice two-man play from Nick Leiverman and Tyler Carpenter. The defenseman wove through the USA defense and found Carpenter with a back-door feed, where he fired in for a 2-1 lead.

The U18s evened the score before the close of the period as Perreault tallied his first with less than a minute to play in the opening frame. Ryan Leonard (Amherst, Mass.) drove the action behind the net and left a no-look pass for Perreault at the left post. He collected and decided to tour behind the cage before connecting with a wraparound attempt to force another tie.

The Irish took their third lead of the game near the midway mark of the second period. NTDP alum Justin Janicke drove a 2-on-1 chance down the left wing and left the puck for Jack Adams. The fifth-year forward received the pass and tucked his backhand attempt past Musser.

The Under-18 Team would not go away as they tied it up once more late in the second. Moore possessed the puck into the offensive zone and left a quick drop-pass for Will Vote (Arlington, Mass.) at the left faceoff circle. Vote collected and fired far-side over the glove of Bischel to tie it at 3-3 into the final period.

Perreault's second of the game gave Team USA its first lead of the evening, 4-3. Will Smith (Lexington, Mass.) threaded the needle with a cross-ice feed to Perreault between two Irish defenders to the left circle. The Illinois native got the shot off his stick in a hurry for his first multi-score game of the season. Smith's assist extended his season-long point streak to six straight games.

Leonard found an empty net with seconds remaining to ice the game for the 5-3 final.

Musser improved to 3-0-0 on the young season and picked up his second career NCAA win in as many games after beating Buffalo State on November 26, 2021.

The U18s return home to skate at USA Hockey Arena for the first time next weekend as they continue the Kroger College Series by hosting Lake Superior State (Oct. 7) and Michigan Tech (Oct. 8) next weekend. Tickets are available by visiting USAHockeyNTDP.com/tix or by calling the USA Hockey Arena box office at 734-453-8400.