Smith scores a pair for U18s in win 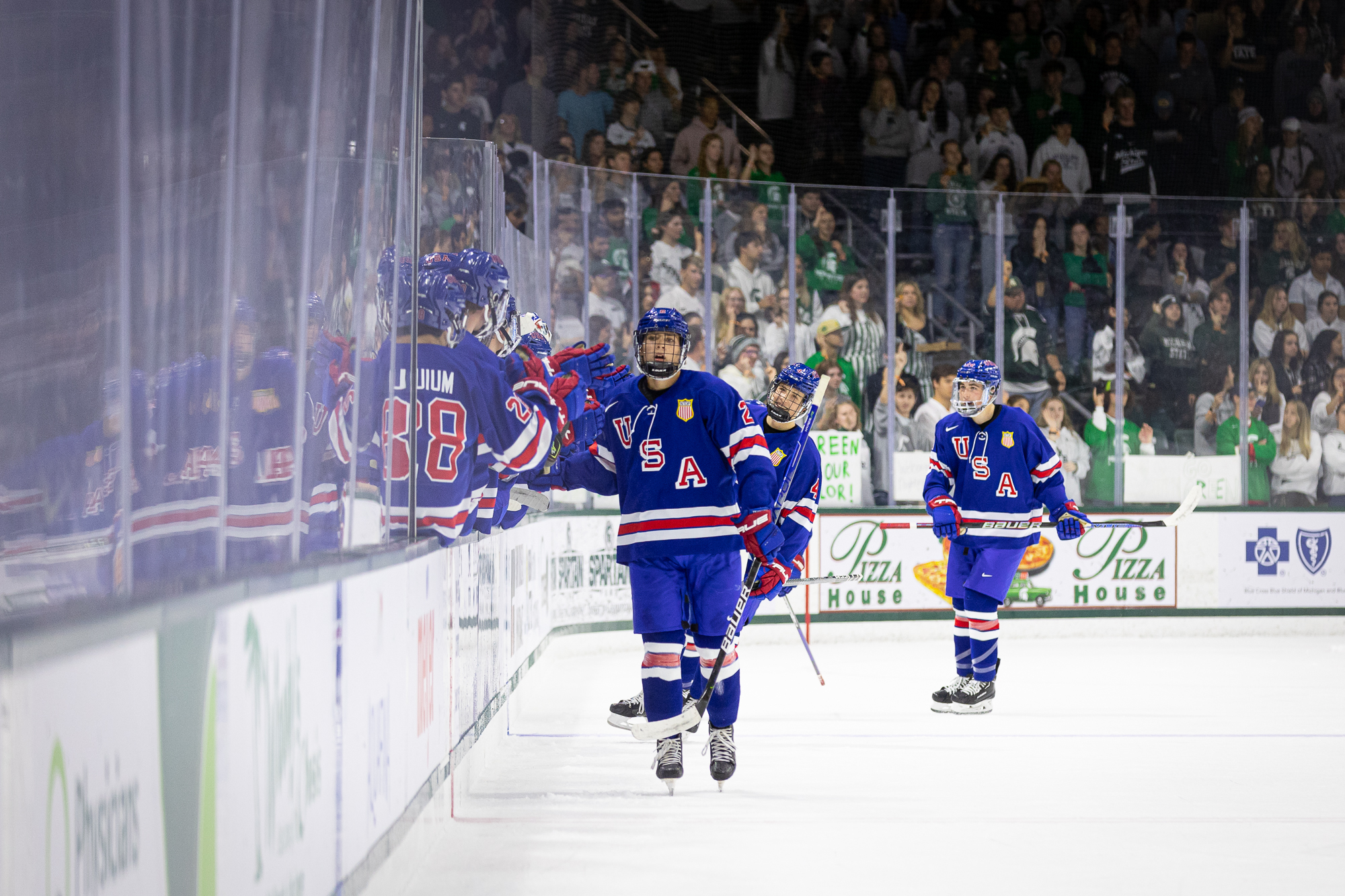 EAST LANSING, Mich. - Will Smith (Lexington, Mass.) continued his torrid start to the season and scored a pair of goals to help lead the U.S. National Under-18 Team to a 4-3 win over Michigan State Saturday night at Munn Ice Arena.

The two sides played scoreless for nearly 15 minutes to start the contest thanks in large part to a 90-second 5-on-3 penalty kill from the U18s, buoyed by a trio of stops from netminder Trey Augustine (South Lyon, Mich.).

Will Smith (Lexington, Mass.) eventually broke the tie with a rebound goal at 14:52 of the opening frame. Zach Schulz (South Lyon, Mich.) steadied the puck at the blue line to keep it in the attacking zone and left it for a wheeling Ryan Leonard (Amherst, Mass.) heading towards the cage. Leonard ripped the first shot that was turned aside by Dylan St. Cyr, but Smith was first to the rebound and connected on the second chance to put the U18s up 1-0.

The Spartans evened the score just past the halfway mark of the game as Karsen Dorwart took a cross-crease pass in stride from Daniel Russell and picked the short-side top corner to make it 1-1.

Just more than a minute later, Team USA responded as Drew Fortescue (Pearl River, N.Y.) gathered a loose puck in the defensive zone and sprung Smith in alone behind the defense. He finished forehand over the glove of St. Cyr for his second of the night and fifth goal in five games on the season.

The U.S. doubled its lead to 3-1 moments after off the stick of Oliver Moore (Mounds View, Minn.). He played give-and-go with Alex Weiermair (Los Angeles, Calif.) and re-collected along the left boards. He crept towards the net and roofed a quick wrister over the right shoulder of St. Cyr.

With 3:01 to play in the second, the visitors made it three in a row after Gabe Perreault (Hinsdale, Ill.) tapped into an empty net after a scrum in front of the cage. Smith led a 2-on-1 into the zone, deked a defender and the goaltender and slid a pass to Perreault, stationed just outside the net, for a 4-1 U18 advantage.

Michigan State netted a pair of quick goals early in the third to bring the score back to a one-goal defecit. First, Tiernan Shoudy followed a Justin Jallen attempt and flipped it into the cage to make it 4-2. The Spartans added a power-play tally off a slap-shot from the right wing by Jeremy Davidson at 5:43 to bring them within one.

Augustine preserved the lead with a great save on Cole Kyrgier, alone in front of the net, with 90 seconds to play in regulation.

Michigan State called their timeout and pulled the goaltender after that save, pressuring the U18s for the remaining time in regulation. Fortescue made a huge block to help give Team USA its first collegiate win of the season.

Augustine finished with 34 saves to run his record to 3-0-0 on the young season.

The U18s are back in action tomorrow afternoon as they travel to Indiana to take on the Notre Dame Fighting Irish in a continuation of the Kroger College Series. Puck drop is set for 5:00 p.m. from Compton Family Ice Arena and the game will be streamed on YouTube.