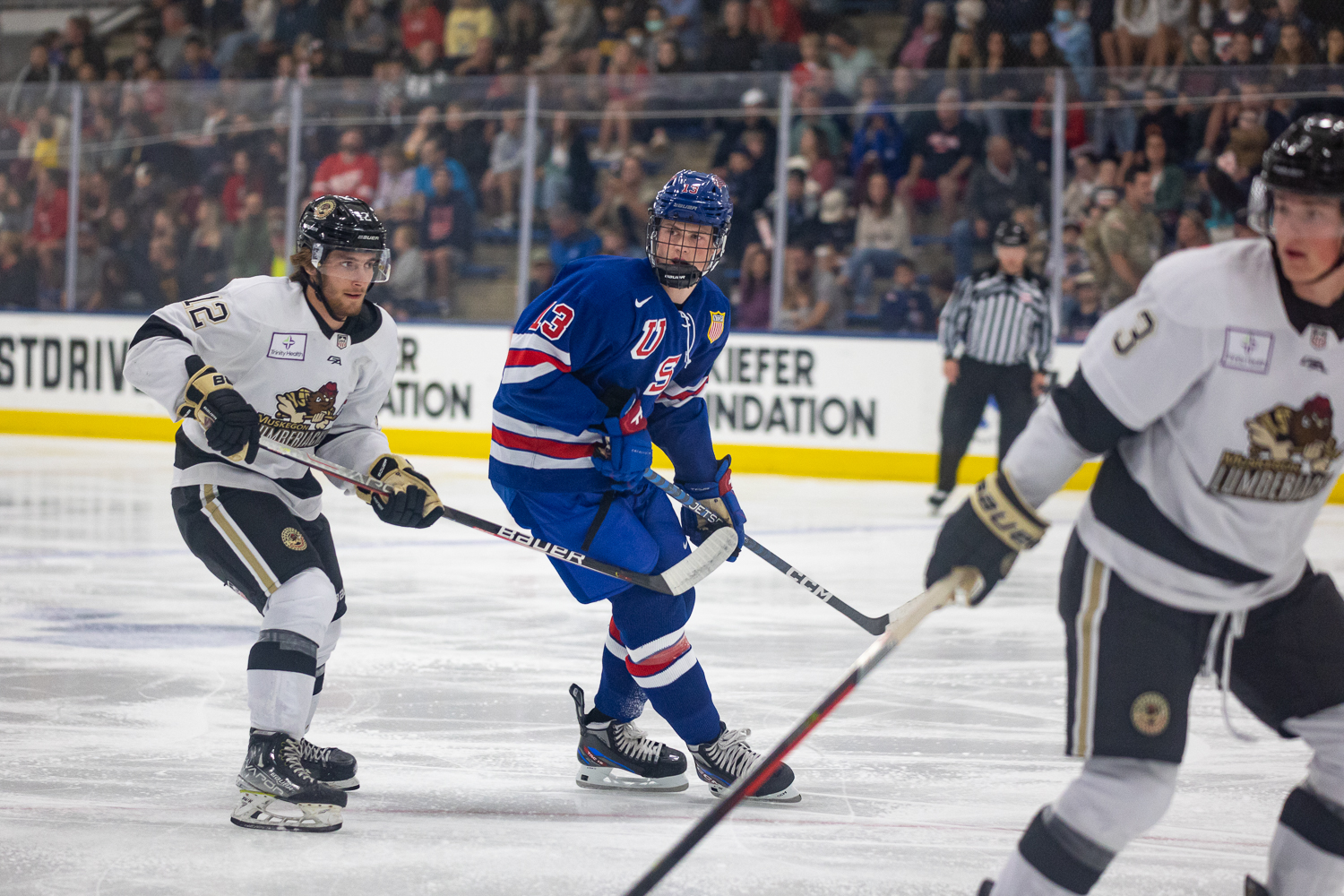 The Lumberjacks got on the board first as Ethan Whitcomb deposited a shot over Trey Augustine's (South Lyon, Mich.) shoulder for a shorthanded marker at 2:39 of the first.

Team USA tied it up with 1:02 to play in the opening period when Will Vote (Arlington, Mass.) flipped in a backhand rebound attempt for his first score of the season. Kai Janviriya (Bloomfield Hills, Mich.) took the initial shot from the right point that was stopped by 'Jacks goaltender Conor Callaghan. Ryan Fine (Center Moriches, N.Y.) was first to the rebound for another shot and Vote followed up with a third chance to tie the game.

The U.S. took a 2-1 lead just shy of the halfway mark of the game when Fine converted off a pretty set-up from Vote. Nathan Tobey (Lantana, Texas) fed Vote into the offensive zone where he dangled the Muskegon defender and slid a pass across the crease for Fine's first of the season.

Ryan Leonard (Amherst, Mass.) doubled the U18 lead with his fifth goal in two nights. Paul Fischer (River Forest, Ill.) and Gabe Perreault (Hinsdale, Ill.) assisted as Leonard crashed the net and jammed it in for a 3-1 advantage.

After Muskegon's Bennett Barnes cut the lead back to one, Will Smith (Lexington, Mass.) responded 10 seconds later to restore the two-goal advantage. Leonard found Perreault streaking into the offensive zone and he ran a 2-on-1 with Smith. Perreault faked a shot and slid to Smith who put it over the shoulder of Callaghan.

Salvatore Guzzo (Old Tappan, N.J.) redirected a pass from Drew Fortescue (Pearl River, N.Y.) at 13:48 of the third and Danny Nelson (Maple Grove, Minn.) followed with a quick wrister from the slot less than a minute later to cap the Under-18 Team's scoring on the night.

Muskegon's Payton Nelson found the back of the net with less than a minute to play in regulation for the 6-3 final.

Augustine picked up his first win of the season as he made 18 saves on the evening.

The Under-18 Team heads out to the USHL Fall Classic next weekend where they will play the Omaha Lancers (Sat.) and Waterloo Black Hawks (Sun.) at the UPMC Lemieux Sports Complex in Cranberry Township, Pennsylvania.