The NCAA slate kicks off October 1-2 as the U.S. National Under-18 Team will travel to west to take on Adam Nightingale and the Michigan State Spartans (Oct. 1), before visiting Jeff Jackson and the Notre Dame Fighting Irish the following day.

The college schedule wraps up with a pair of games against Division I newcomer Lindenwood University at USA Hockey Arena on February 24-25, 2023.

The full 2022-23 NCAA schedule and some highlights are listed below. 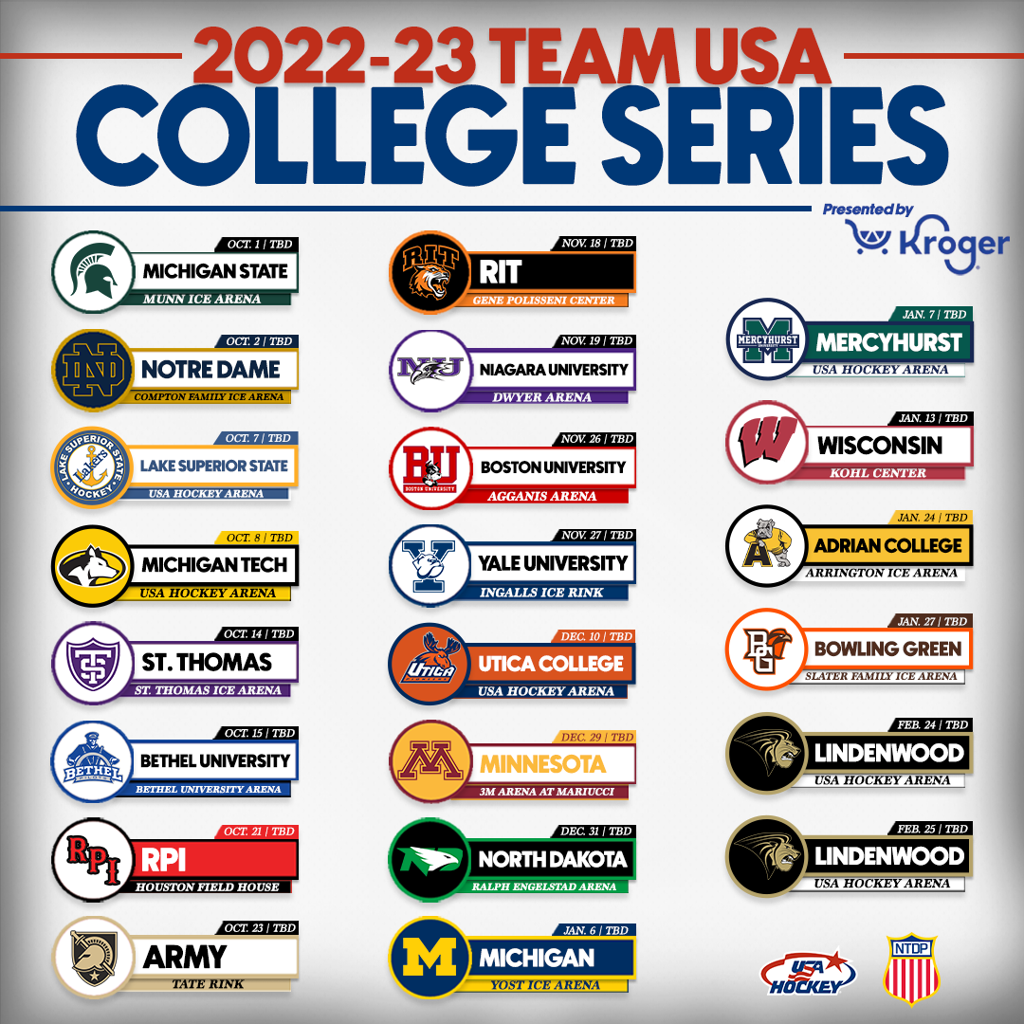 Tickets for those six games are on sale now at the USA Hockey Arena box office. Purchase the full series bundle for just $75, savings of over 30% on individual game tickets. Call 734-453-8400 to get yours today!

EMPIRE STATE
The U18s will become quite familiar with travel to New York, playing four consecutive college games in the state from October 21 - November 19. During the first weekend they travel, the Under-18 Team will visit RPI (Oct. 21) and then take on Army (Oct. 23) Sunday afternoon in West Point for the first time in NTDP history.

After an international break, the team will return to western New York to square off against RIT (Nov. 18) and Niagara University (Nov. 19), playing the Purple Eagles for the first time in program history.

RING IN THE NEW YEAR
The Under-18 Team will get ready for 2023 with a pair of matchups against some of the nation's top programs. The two-game set begins with a trip to Minneapolis to take on the University of Minnesota , where the NTDP will look for its third-ever win over the Golden Gophers.

On New Year's Eve, the U18s will take on the University of North Dakota. Team USA snapped an 11-game losing streak to the Fighting Hawks this season, and will aim for back-to-back wins in Grand Forks.

MINNESOTA MADE
Outside of their trip to Minneapolis to play the Gophers, the U18s will have an additional trip to the Land of 10,000 Lakes when they take on the University of St. Thomas (Oct. 14) and Bethel University (Oct. 15) early in the season.

For five members of next year's Under-18 Team, these three games will bring them back to their home state.