U17s Battled To The End In 5-4 Loss To Muskegon 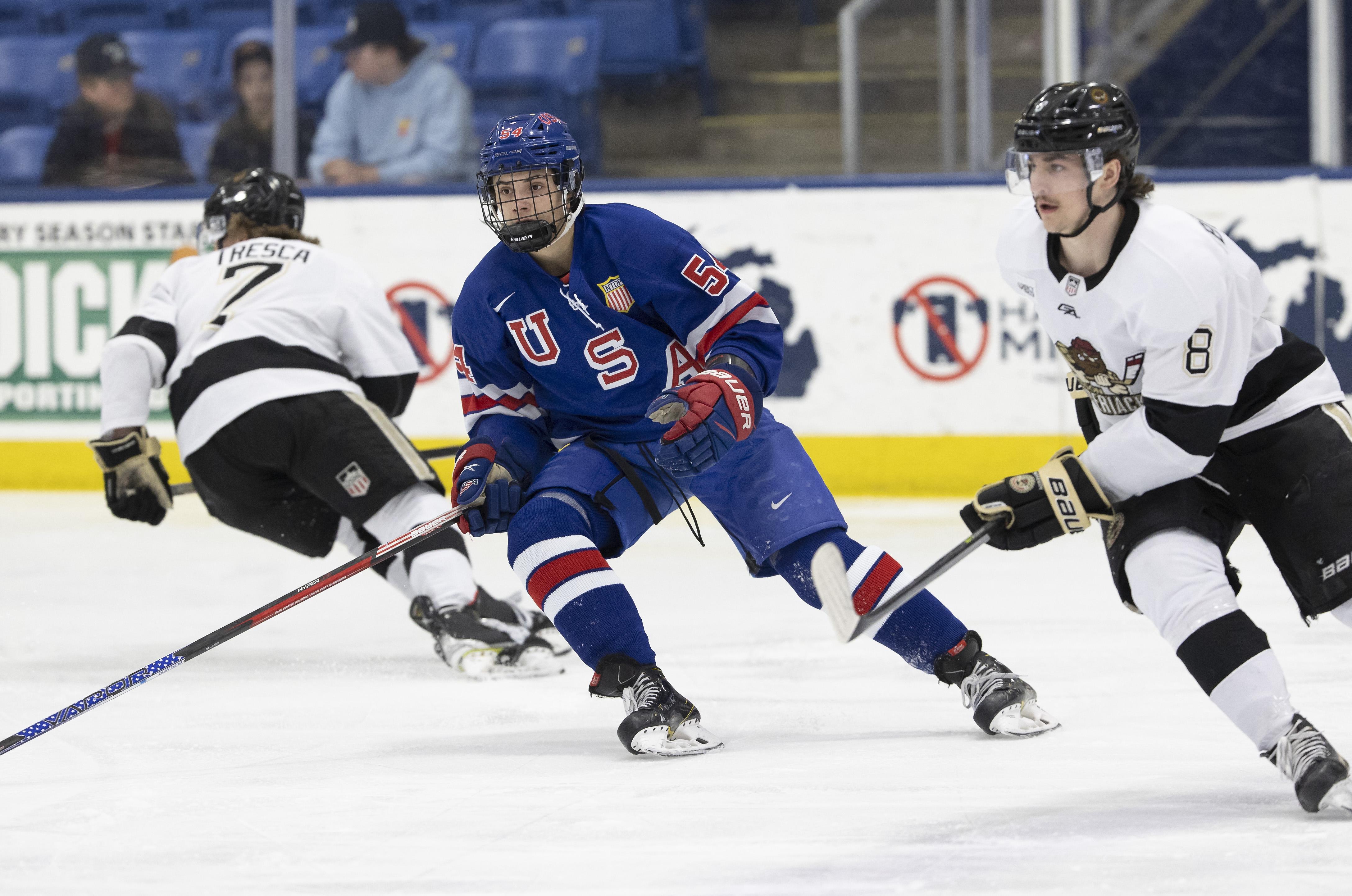 PLYMOUTH, Mich. – The U.S. National Under-17 Team dropped a hard-fought battle, 5-4, to the Muskegon Lumberjacks on Friday night in their series opener.

Muskegon took advantage of an early two-on-one breakaway led by Jake Richard. Richard forced a turnover in the Lumberjacks’ defensive zone and went alone for an unassisted goal and 1-0 lead.

With two minutes passing, the Lumberjacks went up 2-0 over Team USA at the 8:14 mark. Parker Lindauer picked up the puck along the boards for a quick give-and-go opening up a hole for David Hymovitch to bury a goal.

Team USA brought the game back in within one goal thanks to Alex Weiermair (Los Angeles, Calif.) for his 14th on the year. From the faceoff, Gracyn Sawchyn (Chaska, Minn.) centered the puck in front of the net for Will Vote (Arlington, Mass.) for a shot. Vote’s deflection was cleaned up on the backside by Weiermair with 5:39 remaining in the period.

Quinn Hutson put the Lumberjacks back up by two goals on another Muskegon breakaway just 1:26 into the middle frame. Jack Williams fed a pass into the neutral zone for Huston before he put it away for a 3-1 advantage.

After several scoring opportunities for Team USA, Danny Nelson (Maple Grove, Minn.) picked up a rebounded shot and found Paul Fischer (River Forest, Ill.) at the blueline. Fischer led Nelson into the slot for a goal through the five-hole

Less than a minute later, Team USA tied the game at three goals apiece courtesy of Charlie Cerrato (Fallston, Md.). The puck was poked away by Sawchyn in the neutral zone that led to a breakaway for Cerrato who capitalized with a goal to the top left corner.

Before the period ended, the Lumberjacks tallied one more goal to take back the lead, 4-3. Jacob Guevin found Jack Williams at the left faceoff circle for a quick shot to take back the advantage.

In fashion, Team USA tied the game, 4-4, just over the halfway point in the final period. The U17s fought hard to create a turnover in their defensive zone, leading to a one-on-one for Oliver Moore (Mound View, Minn.) for a faked shot that slid past the netminder Aleksandr Kuleshov.

As both teams continued to battle for the win, the game eventually fell in Muskegon’s favor when Richard netted his second goal of the game to secure the 5-4 victory.

The Under-17 Team is back in action tomorrow at home as they close out their series with the Lumberjacks. The game is slated for a 7:00 p.m. puck drop and all the action can be streamed on HockeyTV.