Lucius nets a pair for U18s 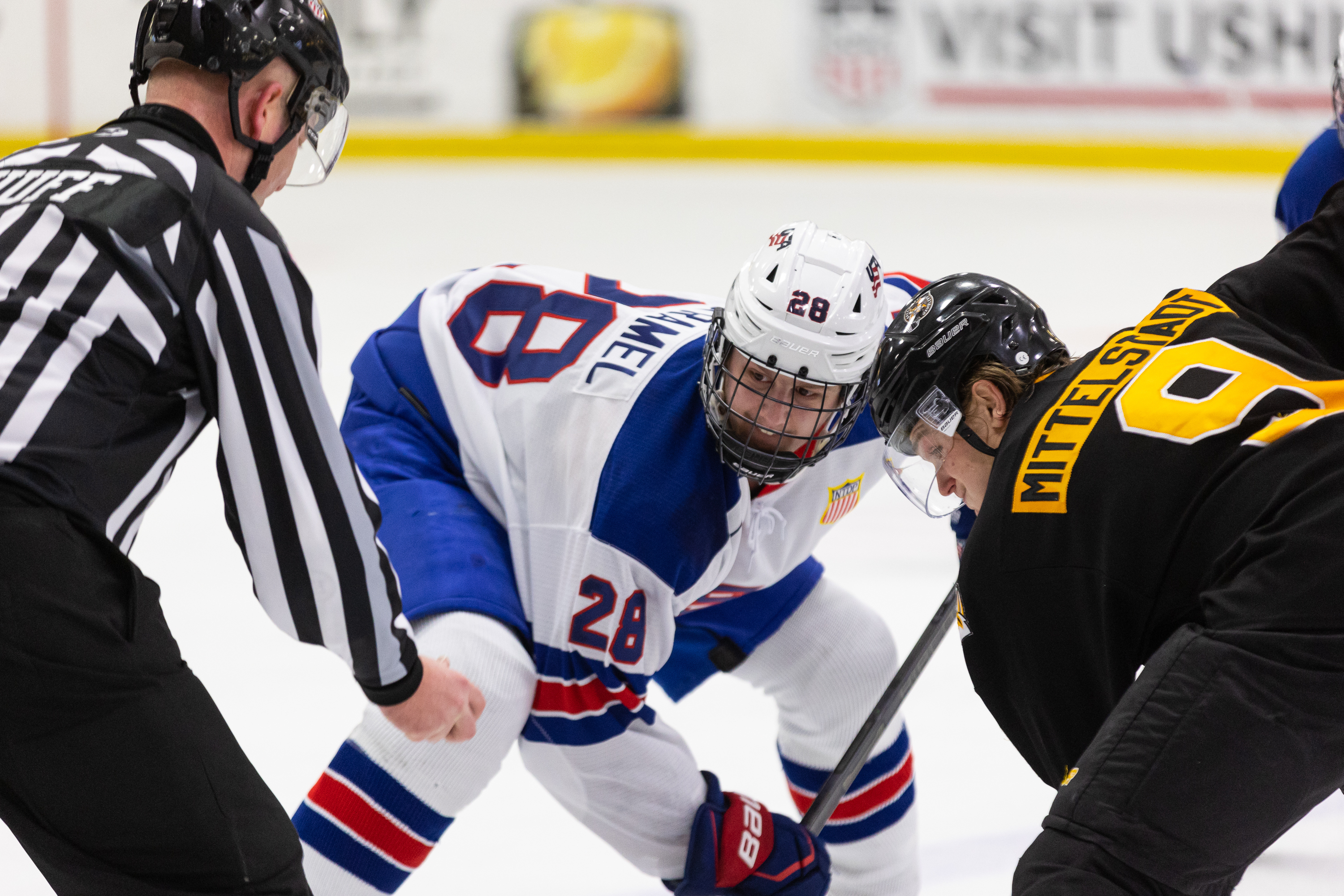 GREEN BAY, Wis. - Cruz Lucius (Grant, Minn.) scored his fifth and sixth goals of the season to help lead the U.S. National Under-18 Team to a 6-2 win over the Green Bay Gamblers Saturday night at the Resch Center.

It took Jimmy Snuggerud (Chaska, Minn.) just 38 seconds to net his 20th goal of the season and give Team USA a 1-0 lead. Lane Hutson (North Barrington, Ill.) won a puck battle to keep the puck in to Logan Cooley (Pittsburgh, Pa.) behind the Gamblers net. He gave Snuggerud a no-look backhand pass, who took two hacks at it in front of the net before it went in.

Charlie Stramel (Rosemount, Minn.) converted off a tic-tac-toe passing sequence on the power play to give the U18s a 2-0 lead before the end of the first. Cutter Gauthier (Scottsdale, Ariz.) gave it to Cooley in the slot where he reversed the puck to Stramel at the left circle. He collected and fired over the blocker of Aaron Randazzo to double the USA lead.

Green Bay tied it up quickly in the middle period as they grabbed a pair of goals in the first three minutes. Brody Lamb converted on a power-play goal and Cam Lund evened the score at 3:01.

Team USA restored its lead on a rocket from Rutger McGroarty (Lincoln, Neb.) off a 2-on-1 break. The captain collected a loose puck off a missed Gamblers shot attempt and led the break with Lucius. The Green Bay defenseman took away the passing lane so McGroarty fired far-side for his 26th of the season.

Lucius added a pair of goals before the close of the frame to give the U18s a 5-2 lead after 40 minutes. Charlie Leddy (Fairfeld, Conn.) snapped a pass to Cooley at the blue line. He drove around the Gamblers defense and dropped a pass to Lucius at the right circle, who rocketed a one-timer by Randazzo.

Lucius gave the visitors their first three-goal lead of the evening with just three seconds left in the second. Will Smith (Lexington, Mass.) made a nice play to keep the puck in the offensive zone and found Isaac Howard (Hudson, Wis.) at the right wing. He slotted a feed to Lucius who collected and ripped for his second of the evening and a 5-2 advantage.

After scoring the overtime winner last night, Seamus Casey (Fort Myers, Fla.) made it goals in back-to-back games with a screen shot on the power play from the center point. The visitors' fourth straight goal was assisted by Cooley and Howard on the team's second man-up goal of the night and the 6-2 final.

Trey Augustine (South Lyon, Mich.) went the distance in net for the U18s and turned aside 25 of 27 Gamblers attempts on the evening. In three appearances with the U18s, Augustine has a 3-0-0 record, 1.00 GAA and .963 save percentage.

The U18s wrap up the road trip and their USHL regular season with a matinee in Cedar Rapids tomorrow. Puck drop is set for 5:00 p.m. ET from ImOn Ice in Iowa.