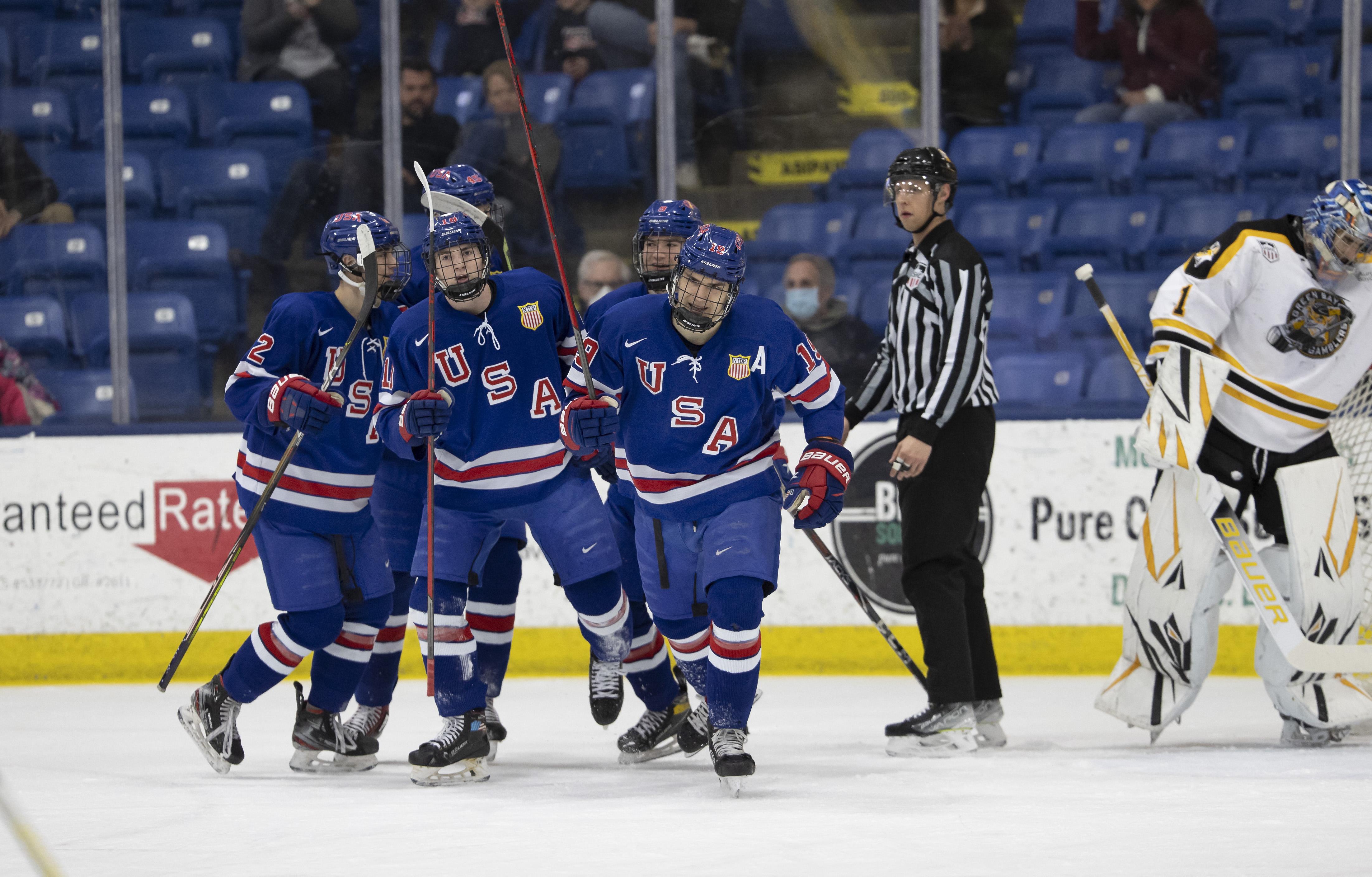 PLYMOUTH, Mich. – The U.S. Under-18 National Team defeated the Green Bay Gamblers, 10-1, on Sunday evening at USA Hockey Arena. Led by a four-point night from captain Rutger McGroarty (Lincoln, Neb.) and a two-goal game from Charlie Stramel (Rosemount, Minn.), the team earned a triumphant victory in their final home game.

Stramel put Team USA on the board at 4:21 of the first. After Stramel’s first shot was denied by the Green Bay goalie, McGroarty collected the rebound behind the net. He sent it to Devin Kaplan (Bridgewater, N.J), who passed the puck diagonally through the crease. Stramel redirected it into the net to give the U18s an early lead.

Ryan Leonard (Amherst, Mass.) doubled the lead with 10:22 left on the clock. Frank Nazar (Mount Clemens, Minn.) grabbed the puck from a Gamblers player behind Team USA’s blue line. He passed it up the ice to Isaac Howard (Hudson, Wisc.), who brought the puck along the left-side boards into the offensive zone. Howard sailed the puck through the crease for Leonard, who deked around the Gamblers’ goalie and scored with a backhand into the open side of the net.

Cutter Gauthier (Scottsdale, Ariz.) made it a 3-0 game at 11:29 off a tic-tac-toe passing sequence from Jimmy Snuggerud (Chaska, Minn.) and Logan Cooley (Pittsburgh, Pa.). Snuggerud intercepted a pass from a Green Bay defender, then found Cooley in the slot. Cooley passed the puck to Gauthier, who tipped it in for his NTDP-leading 31st goal of the year.

With under a minute to go in the first period, Tyler Duke (Strongsville, Ohio) sent the puck into the top-right corner and gave Team USA a four goal lead. Off an original feed from Cooley,  Gauthier tipped it back to Snuggerud, who found Duke at the top of the left faceoff circle. Duke brought the puck up towards the net, then fired in a top-shelf snapshot to extend the lead.

Nazar scored a shorthanded goal early in the second to extend the U18s’ lead to five. Duke carried the puck into the neutral zone and passed it to Marek Hejduk (Parker, Colo.). He handed the puck off to Nazar, threading it between two Green Bay players. Nazar shook off the remaining defender with a burst of speed and went backhand-forehand for the goal, his 25th of the season.

Green Bay scored on the power play with three minutes to go in the second to make the game 5-1.

Team USA responded quickly with a goal from Cole Spicer (Grand Forks, N.D.) to return its lead to five. Will Smith (Lexington, Mass.) moved the puck into the attacking zone, and Howard nabbed the indirect pass off the right boards. Looking for a seam, Howard passed the puck to Spicer, whose wrister found the back of the net, marking Spicer’s 15th goal and 30th point this season.

Lane Hutson (North Barrington, Ill.) padded the U18s’ lead with a goal scored at 19:04 on the clock in the third. McGroarty sent a pass back for Hutson, who notched his 50th point of the season with the top-corner goal.

Howard earned his third point of the night just more than a minute later. Smith, assisted by Spicer, fired a shot from the top of the faceoff circles. Howard potted the rebound to make the game, 8-1.

McGroarty extended the lead again midway through the third. He tapped it back for Stramel, who carried the puck to the blue line before passing it back. McGroarty carried it into the zone and fired it in for Team USA’s ninth goal of the game.

The U18s cracked double digits during the final minute of the game with Stramel’s second goal. Kaplan took an initial shot that Stramel tipped in and made it a 10-1 victory.

Tyler Muszelik (Long Valley, N.J.) made 22 saves on the evening to pick up his 21st win of the season.

The U18s will conclude their season with three USHL games next weekend before heading to the IIHF Under-18 Men’s World Championship in Germany.