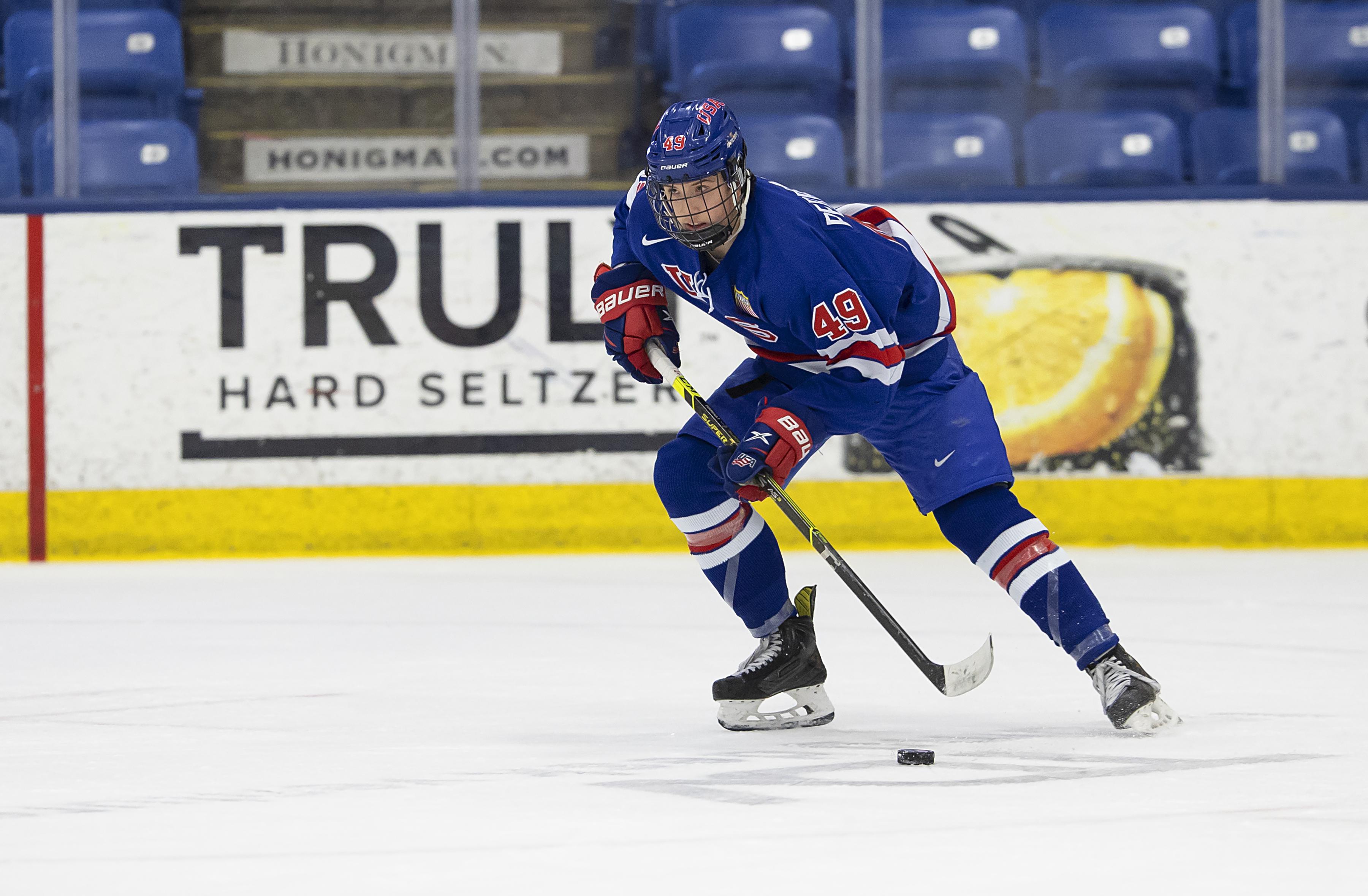 CEDAR RAPIDS, Iowa – Gabe Perreault (Hinsdale, Ill.) recorded one goal and four assists to power the U.S. National Under-17 Team past the Cedar Rapids RoughRiders, 8-2, in the opening game of their weekend series.

There was no hesitation for the Under-17 Team as they kicked off scoring just 2:25 into the opening period. As the Cedar Rapids netminder tried to clear the puck from the offensive zone, Beckett Hendrickson (Minnetonka, Minn.) made a feed to Austin Burnevik (Blaine, Minn.) who cleaned up his own rebound for the 1-0 lead.

Roughly a minute later, Hendrickson netted a goal of his own to extend Team USA’s lead to 2-0. Danny Nelson (Maple Grove, Minn.) kicked it up top for Aram Minnetian (Woodcliff Lake, N.J.) to find Hendrickson for five-hole score.

The RoughRiders were able to get on the board with an early man-advantage. Following some back-and-forth passing up high, Grant Ahcan was able to sneak one in off the inside post.

Following a tough battle along the boards, Zeev Buium (San Diego, Calif.) and Perreault made quick touches on the puck to take control for Team USA. Perreault quickly found Oliver Moore (Mound View, Minn.) in the slot for a power-play goal.

The U17s tallied two more to take a 5-1 advantage into the first intermission. After a hard wrist shot from Moore deflected to the boards, he attempted a second chance that was cleaned up on the backside by Gracyn Sawchyn (Chaska, Minn.). With 2:25 to play, Kaden Muir (Manchester, N.H.) and Perreault setup an easy tap in for Ryan Fine (Center Moriches, N.Y.) in front of the crease.

The scoring continued as the second period rolled on. Perreault served the puck up into the neutral zone that led to a short-handed breakaway for Moore as he beat the netminder with a shot to the top left corner.

Through forty minutes of play, Carsen Musser (Sherburn, Minn.) kept the RoughRiders to one goal scored, making 13 saves on 14 shots.

Sawchyn picked up his second goal of the night on a Team USA power-play just 3:33 into the final frame. Paul Fischer (River Forest, Ill.), from the defensive zone, sent the puck ahead for a Sawchyn who patiently waited for an opening before he fired a shot from the left circle.

After a turnover forced by Moore, Team USA had a two-on-one opportunity that Perreault capitalized on and extended the Under-17 Team’s lead to 8-1.

As the game closed out, the RoughRiders added their second and final goal of the game with less than four minutes to play courtesy Jake Percival.

Musser was able to hold Cedar Rapids to just two as he finished with 24 saves on 26 shots through 60 minutes of action.

Team USA faces off for game two of their three game series against the RoughRiders tomorrow with puck drop set for 8:00 p.m. ET.