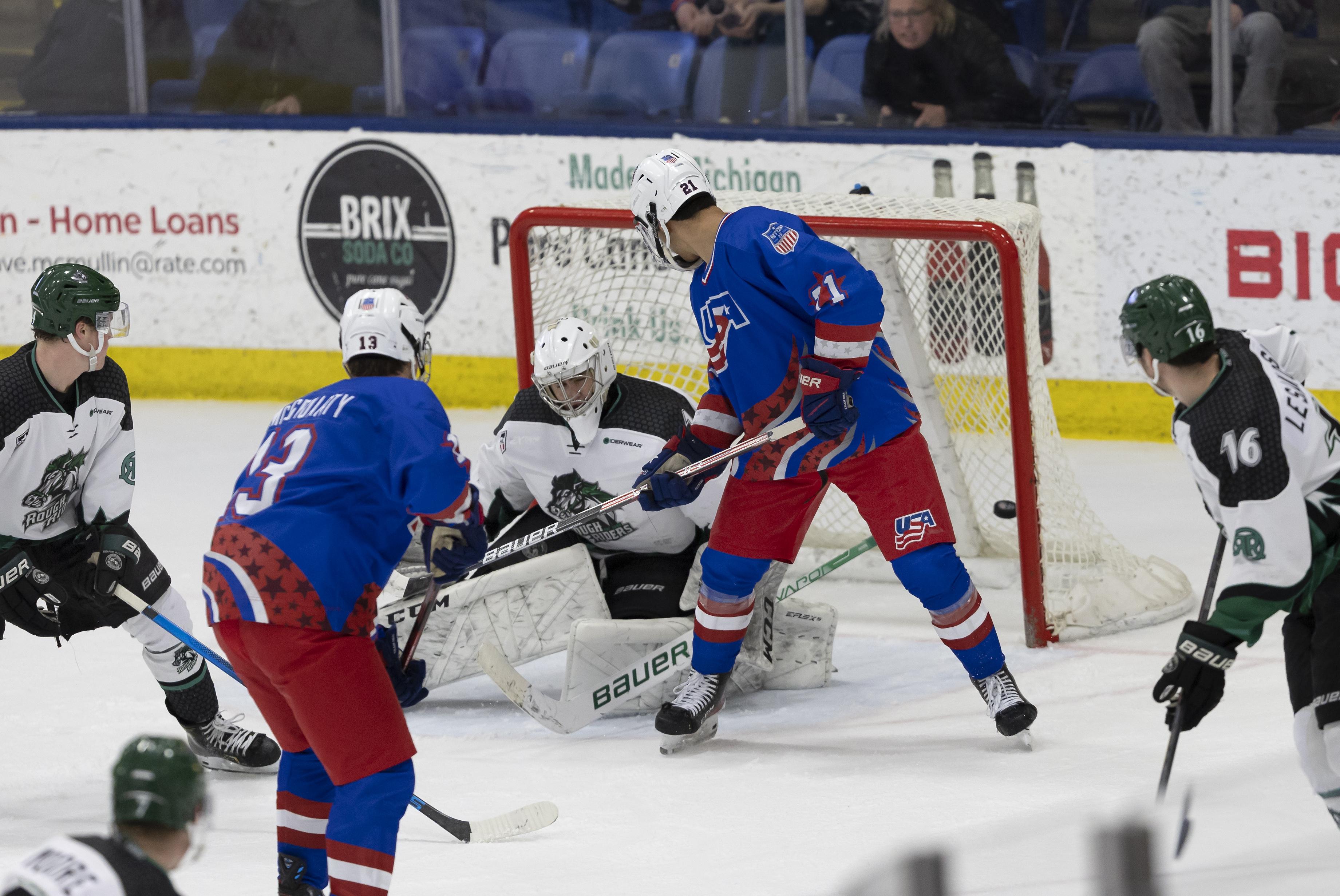 Hutson extended his point streak to five consecutive games, the last three coming with multiple points. Over his last nine games played, the defenseman has produced four goals and 14 assists for 18 total points.

Team USA got on the board first thanks to a heavy forecheck and quick passing sequence from its top line. Rutger McGroarty (Lincoln, Neb.) forced a Cedar Rapids turnover and backhanded a pass to Jimmy Snuggerud (Chaska, Minn.) in the slot. He one-touched the puck across the crease to Logan Cooley (Pittsburgh, Pa.) who hammered his shot in for a 1-0 lead less than five minutes in.

The RoughRiders responded with a pair to take a short-lived 2-1 advantage. Martins Lavins got the visitors on the board when he fired home on a 2-on-1 Cedar Rapids breakout. Andy Moore put them ahead when he tipped in an original shot from Joseph Fleming at 7:20 of the first.

The U18s responded with a pair of their own to retake the lead after 20 minutes of action. McGroarty returned serve on the power play as he converted on a redirection of his own off a feed from Cooley. Hunter Brzustewicz (Washington, Twp.) fed Cooley to pick up the secondary helper on the tying score.

Lane Hutson (North Barrington, Ill.) put Team USA ahead with a ridiculous individual effort on a power-play goal with less than five minutes to play in the first. The defenseman picked up the puck behind his own net, drove the left wing and undressed the RoughRiders defenseman before he finished with a backhander through the five-hole of Connor Hasley for a 3-2 lead.

After a pair of man-up tallies, Ryan Leonard (Amherst, Mass.) continued the impressive special teams night with a shorthanded breakaway goal 1:44 into the middle frame. Hutson picked up a loose puck in the neutral zone and led Leonard in alone where he fired a quick wrister by Hasley for his 15th score of the season.

Team USA added another during 4-on-4 play when Cole Spicer (Grand Forks, N.D.) tapped in a back-door feed from Tyler Duke (Strongsville, Ohio) near the halfway mark of the game. Leonard ushered the play into the offensive zone as he picked up his first multi-point game with the U18s.

The RoughRiders' Grant Ahcan roofed a short-side shot with three seconds left in the period to make it a 5-3 contest after 40 minutes.

Jake Percival brought Cedar Rapids back within a goal when he converted on a second-chance opportunity through the legs of Tyler Muszelik (Long Valley, N.J.) with 12:09 to play in regulation.

Cruz Lucius (Grant, Minn.), in his first game back in the lineup since October 15, restored the two-goal advantage for Team USA as he ran a give-and-go on a 3-on-2 break with Hutson. Lucius delayed to let the defenseman into the play and Hutson returned the pass for Lucius' fourth score of the season.

Howard added an empty-netter for the 7-4 final.

Muszelik finished the game with 28 saves as he picked up his 20th win of the season and a 20-4-2 overall record.

The two sides will skate again in their regularly-scheduled game at 4:00 p.m. this afternoon at USA Hockey Arena.