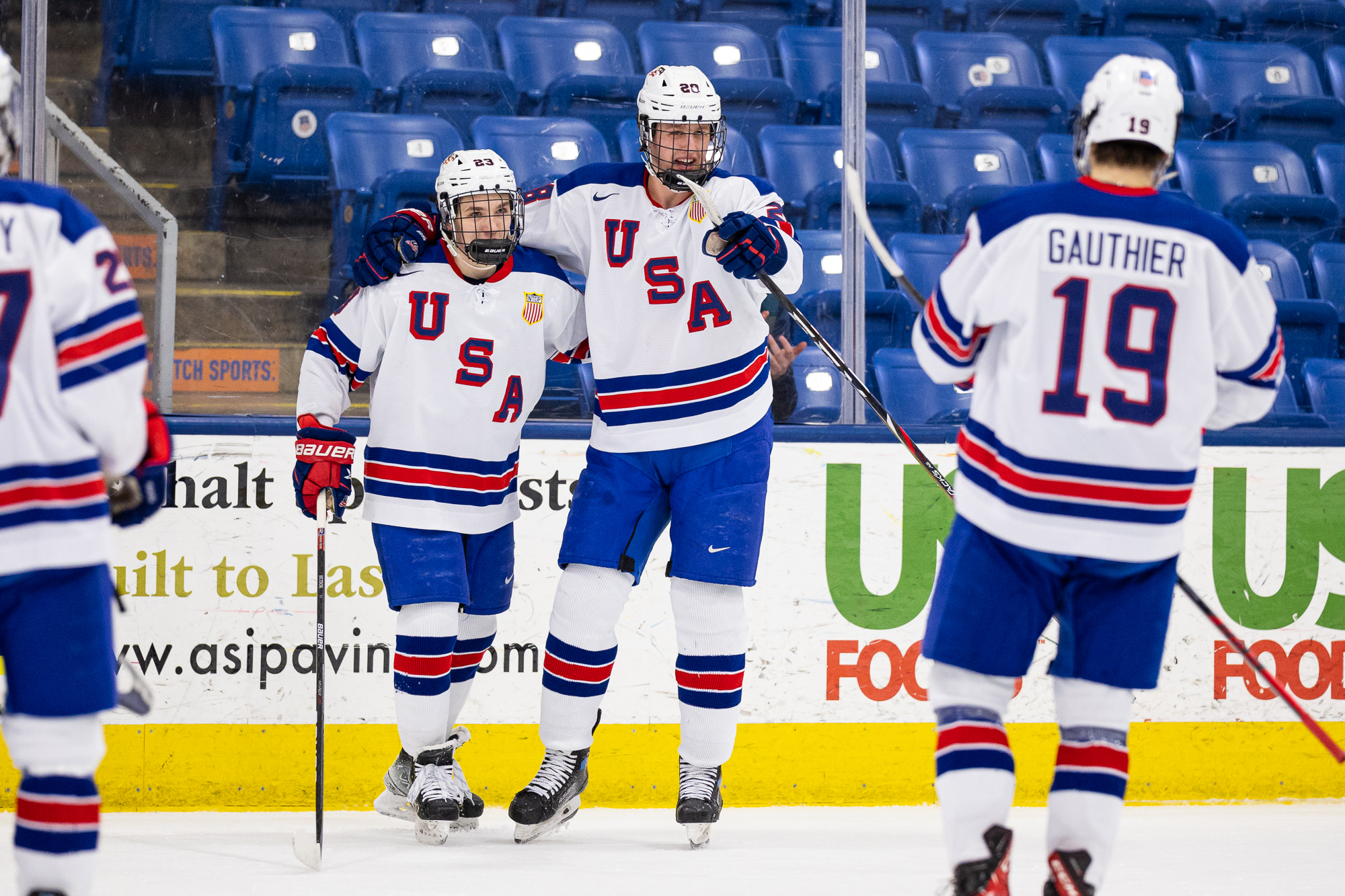 PLYMOUTH, Mich. - The U.S. National Under-18 Team got goals from five different players to wrap up their 2021-22 Kroger College Series with a 5-2 win over the University of Alaska-Fairbanks Nanooks Wednesday night at USA Hockey Arena.

Cole Spicer (Grand Forks, N.D.) opened the floodgates with the game's first marker at 11:01 of the opening period. The play started with Brady Berard (East Greenwich, R.I.) firing a pass to lead Ryan Leonard (Amherst, Mass.) into the offensive zone. He collected, stopped on a dime and centered a feed to Spicer, who flicked a quick wrister far-side past Nanooks goalie, Daniel Allin.

Three and a half minutes later, the U18s doubled their lead when Frank Nazar (Mount Clemens, Mich.) redirected a feed from Isaac Howard (Hudson, Wis.) in front of the net through the goaltender's five-hole. Will Smith (Lexington, Mass.) picked up the extra assist on the 2-0 score.

Alaska's Arvils Bergmanis answered quickly to put the Nanooks on the scoreboard. The defenseman drove down the right wing and his centering attempt got stuck between the pads of Dylan Silverstein (Calabasas, Calif.) and trickled in to make it 2-1.

Team USA's Charlie Stramel (Rosemount, Minn.) restored the two-goal lead before the end of the period with a slick deke on a breakaway before finishing with a backhand chip over the right pad of Allin. Lane Hutson (North Barrington, Ill.) made a great play in the defensive zone to dig the puck free and Cutter Gauthier (Scottsdale, Ariz.) made the breakout pass to collect helpers on Stramel's fifth of the season.

Gauthier netted the lone goal of the second period when he found a loose puck in the slot off a failed Alaska clearing attempt and ripped a wrister over the shoulder for his NTDP-leading 27th marker of the year and a 4-1 advantage.

Alaska's Brady Risk balanced a bouncing puck and roofed a shot in the top-right corner of the net to cut the Nanooks' deficit to 4-2 less than five minutes into the third period.

With the Alaska net unmanned, Ryan Chesley (Mahtomedi, Minn.) lifted a shot 200 feet down the ice for an empty-net tally and 5-2 final.

Silverstein turned aside 19 attempts from the Nanooks to pick up his third collegiate victory of the season. In those three wins, the Boston College commit has combined to stop 92 of 94 shots against, good for a ridiculous .979 save percentage.

With the completion of the collegiate slate, the U18s return to USHL action for the remainder of the season. They head to Muskegon for a pair of games this weekend against the in-state rival Lumberjacks. Puck drop is set for 7:00 p.m. from Mercy Health Arena on Friday and Saturday evenings.