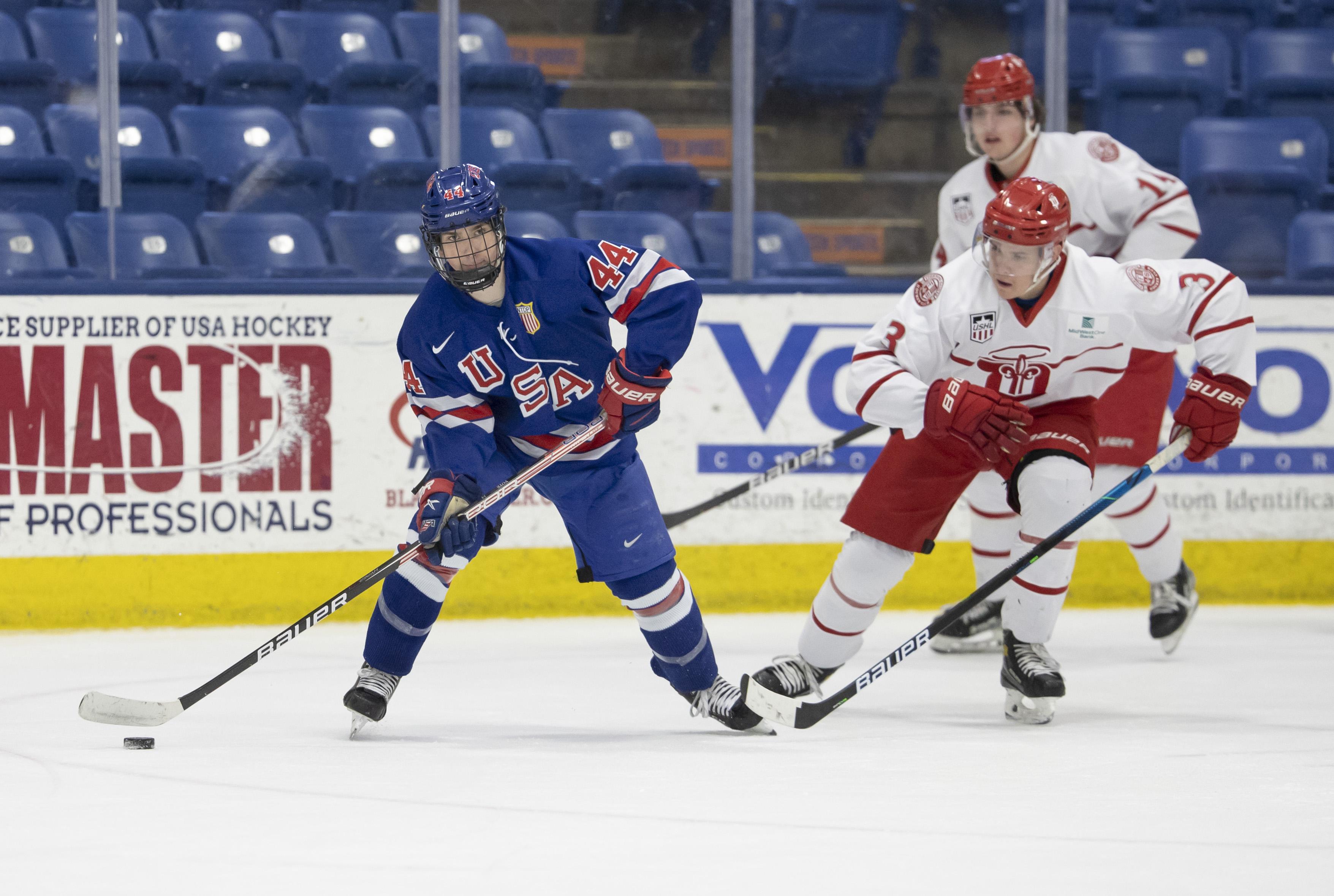 PLYMOUTH, Mich. – The U.S. National Under-17 Team took the Dubuque Fighting Saints to overtime but fell, 6-5, in their final matchup of a three-game weekend.

Zeev Buium (San Diego, Calif.) wasted no time giving the U17s a 1-0 advantage on the Fighting Saints. Kaden Muir (Manchester, N.H.) fed the puck across open ice for Buium just inside the blueline. Buium skated into the faceoff circle for a laser top shelf 1:45 into the game.

Just before the midway point in the opening frame, Dubuque’s Max Burkholder tied the game on a goal through traffic from the right dot on an assist from Zane Demsey.

Through the remainder of the period, Carsen Musser (Sherburn, Minn.) continued to battle in net. Overall, Musser made six saves on seven shots through twenty minutes of play.

The Fighting Saints took the lead to open the second period just over the two-minute mark. Tristan Lemrye kept the puck within their offensive zone for Kenny Connors who ultimately found Jackson Hallum for a tip on the backside for the 2-1 advantage.

Will Vote (Arlington, Mass.) netted his fifth goal in as many games to tie the game with 10:53 left in the second period. Charlie Cerrato (Fallston, Md.) worked the puck into the offensive zone for a shot that bounced out in front of the crease for Vote to clean up and put away.

Burkholder, with his second goal of the evening, took back the lead, 3-2, for the Fighting Saints. From the faceoff won by Dubuque, Connor Kurth freed the puck from the back boards as Burkholder came into the slot for a quick release and the go-ahead goal.

Just a quick as the final period started Team USA tied the game up 3-3. Cerrato again working the puck around connected with Salvatore Guzzo (Old Tappan, N.J.) for a shot from the left side that deflected off a Dubuque skater and into the net just 13 seconds in.

In the span of less than a minute, the Fighting Saints’ Michael Burchill and Kurth scored back-to-back goals to go up by two halfway through the third frame.

With less than two minutes remaining, Paul Fischer (River Forest, Ill.) put Team USA within one goal on a snipe from the top of the offensive zone. Cerrato and Austin Burnevik (Blaine, Minn.) were credited with the assists.

Not ready to call it quite yet, Gabe Perreault (Hinsdale, Ill.) sent us to overtime with 42 seconds left on the clock. Aram Minnetian (Woodcliff Lake, N.J.) swung the puck over for Buium who quick sent a cross-ice pass to Perreault in the right faceoff circle for the tying goal.

Just 49 seconds into the overtime period, Hallum solidified the victory of Dubuque on a breakaway goal set-up by Connors.

With 58 minutes played in this game, Musser tallied 24 saves on 30 shots to close out the weekend series.

With a break next weekend, the Under-17 Team is back at home on Friday, March 18 when they host the Cedar Rapids RoughRiders. The game is set for 7:00 p.m. ET and can be streamed on HockeyTV.