U18s Return to College Slate With 5-4 Win Over Providence

Hejduk nets game-winner for U18s' first ever win over Friars 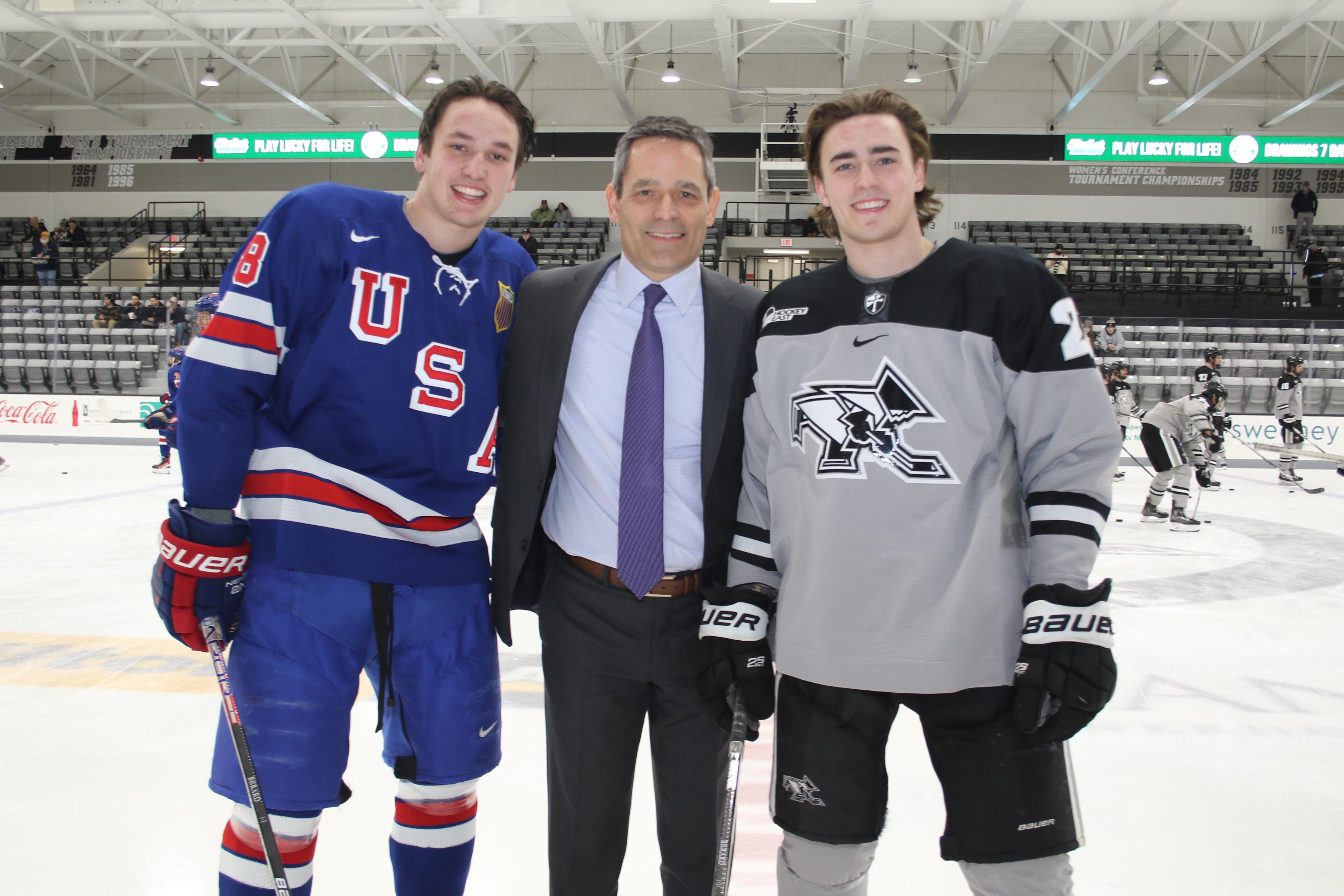 PROVIDENCE, R.I. - Marek Hejduk (Parker, Colo.) broke a 4-4 tie with 7:21 to play in regulation to give the U.S. National Under-18 Team a 5-4 win over the Providence Friars Friday evening at Schneider Arena. The win marked the first for Team USA in its fourth game in program history against Providence.

Hejduk found a loose puck in the neutral zone, carried into the offensive zone veering down the right wing and rifled a wrist-shot over the blocker of Friars netminder Austin Cain. The goal was Hejduk's 10th of the season to push the U18s to their 11th NCAA victory of the campaign.

The U18s appeared to double the lead less than a minute later when Cutter Gauthier (Scottsdale, Ariz.) fired in from the left wing off a feed from Logan Cooley (Pittsburgh, Pa.) but the goal was disallowed due to Gauthier being offside after an official review.

The collegians evened the game off a Michael Callahan power-play goal as his wrist-shot went over the shoulder of a screened Tyler Muszelik (Long Valley, N.J.). Brett Berard, NTDP alum and older brother of U18 forward Brady Berard (East Greenwich, R.I.), started the play for the Friars.

With 10 seconds to play in the opening frame, Frank Nazar (Mount Clemens, Mich.) poked in a rebound that scooted behind Stauber to give Team USA a 2-1 lead after 20 minutes. Isaac Howard (Hudson, Wis.) dragged the puck around a PC defenseman to put the original shot on net and Nazar cleaned up the rebound in front for his 21st score of the season. Will Smith (Lexington, Mass.) was credited with the secondary assist, giving him 12 points in 13 games with the U18s.

Team USA took advantage of a 4-on-3 power play to extend the lead off a booming one-timer from Lane Hutson (North Barrington, Ill.).  Jimmy Snuggerud (Chaska, Minn.) worked the puck to Cooley at the point, where Team USA's top prospect found Hutson at the right circle. Hutson fired short-side, top corner with his big shot to extend the lead to 3-1.

The U18s added another at 14:43, this one off the blade of Howard. Nazar fed Smith down into the offensive zone down the right wing and he centered a nifty backhand feed to Howard in the slot. The Minnesota Duluth commit collected and ripped his shot past Cain, the first he saw on the night, for his 23rd score of the season.

After a major penalty was assessed to Team USA late in the period, Providence netted another power-play tally, this one from Nick Poisson, to cut the deficit to 4-2 after two periods of play.

With 13:49 to play in regulation, the Friars drew within one when Parker Ford converted on a second-chance opportunity after Berard was denied on the original shot.

Providence evened the score at 4-4 when Craig Needham tapped in a pass from Riley Duran off a pretty 2-on-1 execution with 8:55 to play.

Ninety-four seconds later, Team USA restored its lead when Hejduk found the back of the net for the game winner.

Tyler Muszelik (Long Valley, N.J.) turned aside 32 shots on the evening to extend his record to an impressive 17-4-2 on the season.

The U18s are off for the remainder of the weekend. They'll return to USA Hockey Arena to close out the 2021-22 Kroger College Series against the University of Alaska Nanooks Wednesday evening. Tickets are available for the game by visiting USAHockeyNTDP.com/tix or by calling the USA Hockey Arena box office at 734-453-6400.